I am currently reading a book called Serious Cryptography written by Aumasson to learn about Security. There was a paragraph talking about the security goal named indistinguishability (attached below), which reads in the section "Security Goals":

I've informally defined the goal of security as "nothing can be learned about the cipher's behavior." To turn this idea into a rigorous mathematical definition, cryptographers defined two main security goals that correspond to different ideas of what it means to learn something about a cipher's behavior:

While I understood that the point is to make it infeasible to point out which plaintext is encrypted when randomly given the ciphertext from one of 2 plaintexts.

I don't know how it is infeasible anymore when the attacker can now perform encryption/decryption queries on the given plaintexts as mentioned in the paragraph. Why can't they just encrypt both given plaintexts and then compare them with the given ciphertext?

I think you are missing the idea of randomness as part of a cryptographic application. It is not possible to create CPA-IND- order CCA-IND-security with a deterministic encryption scheme. Only by adding randomness, as an additional ephemeral secret key, those level of security can be archived.

Here is a very simple scheme (you can find it in Katz & Lindell's textbook (2nd edition)), which can be proven to be CPA-secure. $r$ is the needed randomness and $k$ is the standard secret key. $F$ is a pseudo random functions (based on $r$ and $k$) 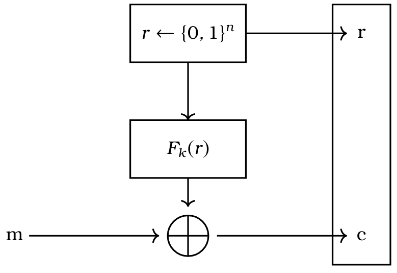