What stops the Multiply-With-Carry RNG from being a Cryptographically Secure PRNG?

Considering it's possible to define a seed etc., what is the MWC RNG missing that a CSPRNG has? Simpler asked: "What stops the MWC PRNG from being a CSPRNG?"

CSPRNGs have to pass statistical randomness tests, which MWC RNG seems to satisfy. Also, MWC PRNG allows you to choose random initial as long as c < 809430660, which seems big enough to make it hard for people to analyse which of the 809430659 options you chose to seed the MWC PRNG. And last but not least people call it the "mother of all RNGs" — see George Marsaglia's "Mother of all RNGs" (C code with comments) (via archive.org) — which implies it's about the best (P)RNG out there.

Therefore I am wondering and asking: "What stops the MWC PRNG from being a CSPRNG?"

Or, asking in other words:

In case someone needs some references related to MWC PRNG…

Since Berkeley obviously removed all of George Marsaglia's work during a server cleanup, which is why I’m posting a copy of stat.berkeley.edu/classes/s243/mother.c here for reference purposes:

And here's a copy of Marsaglia's original publication, which was first published at sci.stat.math…

Most RNGs work by keeping a certain number, say k, of the most recently generated integers, then return the next integer as a function of those k. The initial k integers, the seeds, are assumed to be randomly chosen, usually 32-bits. The period of the RNG is related to the number of choices for seeds, usually 2^(32k), so to get longer periods you need to increase k.

Probably the most common type has k=1, and needs a single seed, with each new integer a function of the previous one. An example is this congruential RNG, a form of which was the system RNG in VAXs for many years:

Simple, k=1, RNGs can perform fairly well in tests of randomness such as those in the new version of Diehard,

but experience has shown that better performances come from RNGs with k's ranging from 4 or 5 to as much as 4097.

Here is an example with k=5, period about 2^160, one of the fastest long period RNGs, returns more than 120 million random 32-bit integers/second (1.8MHz CPU), seems to pass all tests:

The Mersenne Twister (check Google) is an excellent RNG, with k=624. But it requires an elaborate C program and is slower than many RNGs that do as well in tests, have comparable or longer periods and require only a few lines of code.

You will find several more CMWC RNGs and comments on choice of seeds in the May 2003 Communications of the ACM.

It fails to be a cryptographically-strong PRNG because it is predictable: given some outputs, you can predict the next outputs. For instance, if you observe the outputs at offsets 0, 1, and 4096, you can predict what the output will be at offset 4097.

Anyway, I'm not sure why this question comes up. We have crypto-strength PRNGs that are secure, fast, and well-vetted. I don't know why one would mess around with trying to design your own based upon a non-crypto PRNG; that way leads to insecurity. If you think you can do better than the entire field at designing fast crypto-strength PRNGs... well, maybe you can, but I doubt the odds are on your side. Instead, I recommend you use a standard crypto-strength PRNG, if you need crypto-quality pseudorandom numbers.

Even though it passes some statistical tests, it fails hardly the spectral test with 3 dimensions. You can reproduce that with R: 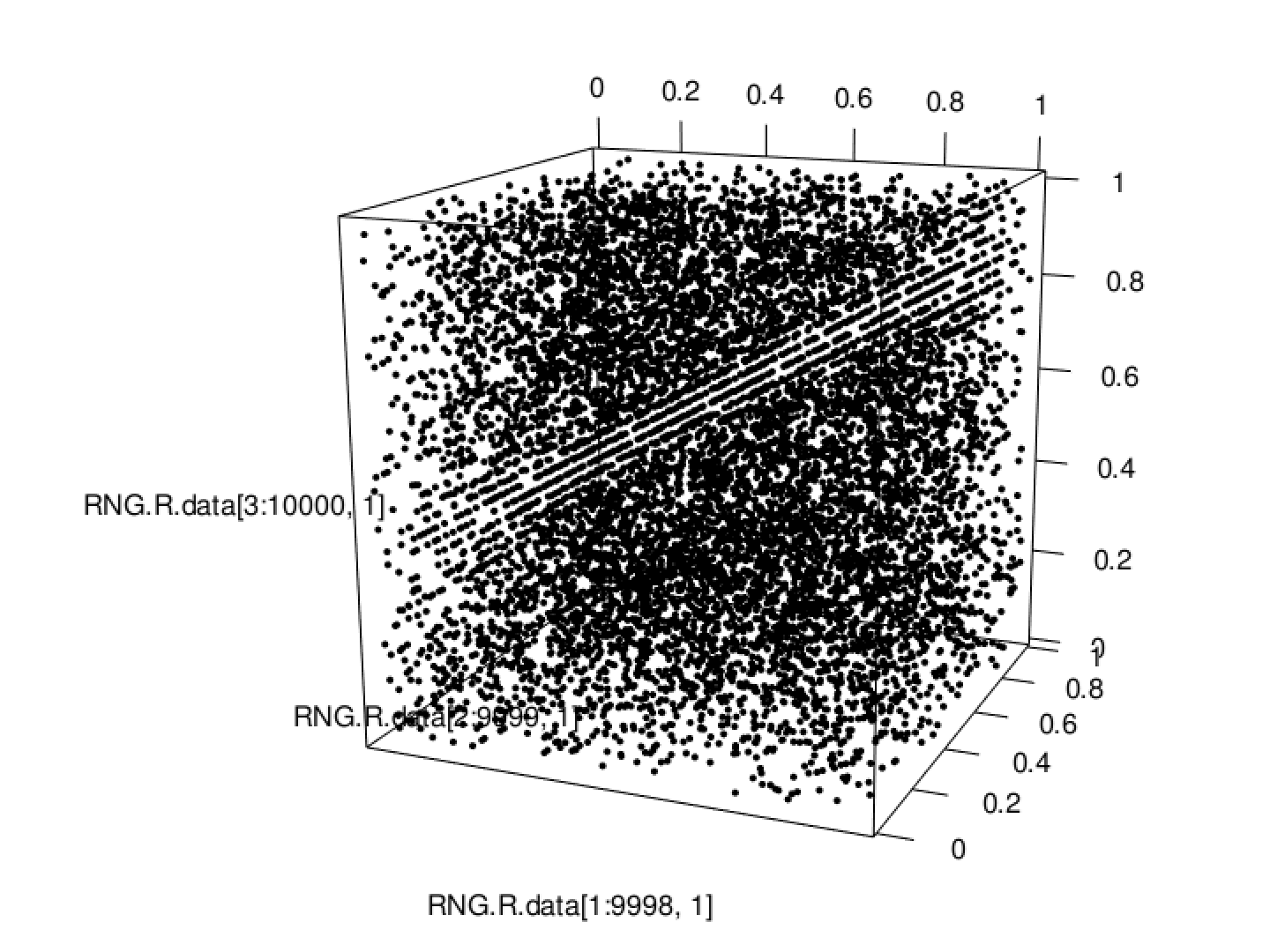 2
Is a Mersenne-twister cryptographically secure if I truncate the output?
3
How broken is a xor of two multiply with carry generators?

87
Is modern encryption needlessly complicated?
3
Which PRNG security requirements do I need for key generation
2
Is a Mersenne-twister cryptographically secure if I truncate the output?
5
Randomness test question from FIPS 140-1 and comparison with 140-2
3
How broken is a xor of two multiply with carry generators?
1
Metrics of PRNGs
12
Dice vs quantum random number generator
2
Making PRNG cryptographically secure thru shuffling?
0
How many 12 bit integers output are required to reverse the Mersenne Twister?
2
Is it possible to create a 128-bit UUID from a weak entropy source?