some of my confusions about DDH assumption

The wiki defines the decisional Diffie–Hellman assumption as follows:

This intuitive notion is formally stated by saying that the following two probability distributions are computationally indistinguishable (in the security parameter $q$):

some confusions about DDH assumption

Importantly, the DDH assumption does not hold in the multiplicative group $\mathbb{Z}^*_p$, where $p$ is prime. This is because given $g^a$ and $g^b$, one can efficiently compute the Legendre symbol of $g^{ab}$, giving a successful method to distinguish $g^{ab}$ from a random group element

poncho shows me how to do it. Next i will describe that in my understanding.

But in practical, does the DDH Oracle really exist? if not, supposing the exist of DDH Oracle will mean nothing. Or in other words, in the real word this Oracle is hard to realize then this kind of assumption will do nothing(this is only my personal thought)

Next i want to use an example to illustrate my confusions.This protocol comes from here 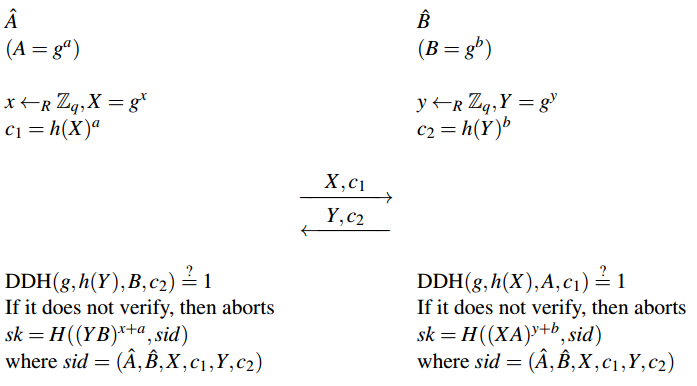 so who can help to clear these confusions?

By choosing $g$ to have a prime order $q$ exactly, this method is fully countered, and DDH is hard again.

For groups where DDH is easy, but CDH is hard: the method above is only partial: it makes DDH easy in some cases, in that it can detect some situations where a given triplet $(g^a,g^b,g^c)$ is not a DH triplet ($c \neq ab$), but not all. To have a group where DDH is invariably easy, but CDH still hard, you need some more mathematics. The only known really practical solution (so far) uses pairings on elliptic curves. This requires choosing curves with some specific characteristics.

Not the answer you're looking for? Browse other questions tagged diffie-hellman key-exchange discrete-logarithm provable-security or ask your own question.

4
How can we determine if two discrete logarithms are equal?
4
Diffie-Hellman: *assumed* largest prime factor of order of $g$?