Folks, I am undertaking a crypto course in Uni. Our professor asked us to try and design some authentication schemes which are resistant to active attacks. This was just a in class exercise to get us interested in the topic. It did the trick, I have been trying to come up with something using what we have learned so far.

Here is a authentication scheme I developed : 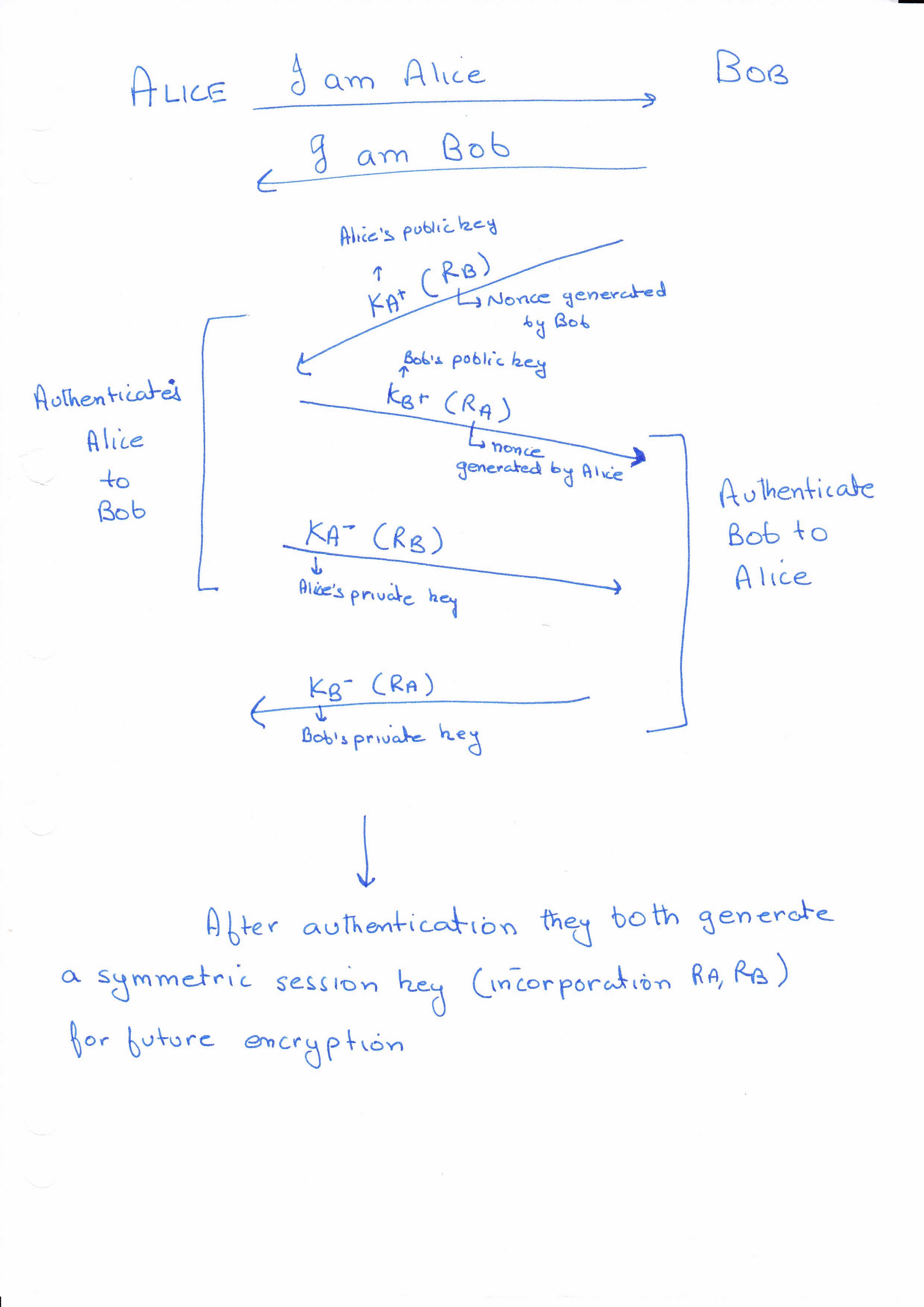 Please punch holes through it and tell me what attacks are these vulnerable to?

P.S - Notation explanation : Ka+(Rb) denotes the encrypted text that was generated by encrypting the nonce generated by Bob using Alice's public key. This text is decrypted by Alice using her private key Ka- and gets Rb. Alice then encrypts Rb with her private key and sends it to bob. Who then uses Alice's public key to decrypt the message and get text. If this text is same as Rb then alice Has been authenticated to Bob

P.P.S - Before you guys suggest Man-In_middle attack : Here is why I think it wont work : 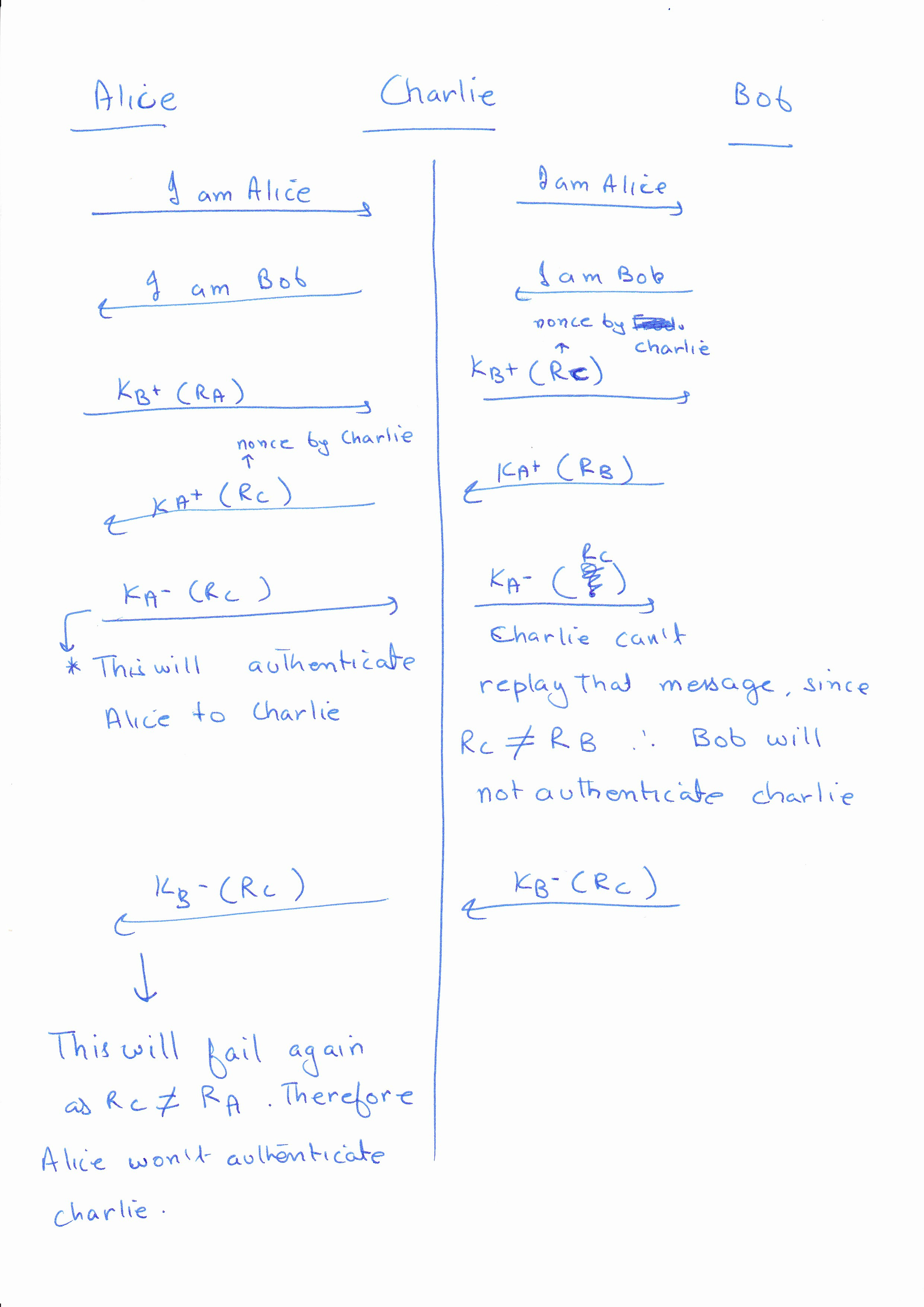 The protocol's description includes "Alice then encrypts $R_B$ with her private key". This has no standard meaning. Comments have clarified it is used an "RSA encryption scheme with proper padding" and I am taking as granted that encryption of $R_B$ using the private key half of $K_A$, denoted $K_A^-(R_B)$, is obtained by padding $R_B$ as in encryption, then applying the RSA private key exponentiation of $K_A$. This can be a valid form of signature (while RSA signature and encryption usually use different padding, it is possible to define a secure padding that works for both encryption and signature).

The protocol does nothing to prevent a MitM attack. In the usual definition of that, Charlie's goals are:

In order to achieve every single of these goals, Charlie:

Charlie reached all his goals. The only thing that Charlie does not know is the padding used in $K_A^+(R_B)$ and $K_B^+(R_A)$ if that's random padding, but there is no indication that some use is made of it.

Further, if for some reason Charlie wants to choose his own nonce $R_C$ as in the second drawing, rather than use $R_A$ or $R_B$ (perhaps because the protocol is extended with "After authentication, perform the action defined in the low 20 bytes of the $R$ that I sent"), Charlie can still achieve that. In order to impersonate Alice w.r.t. Bob using an $R_C$ of Charlie's choice instead of $R_A$ chosen by Alice, Charlie

From then on, Charlie acts with respect to Bob using the (unspecified) protocol defined for Alice, including deciphering Bob's messages, and forwarding anything Charlie decides to Bob, which has no way to tell that it comes from Charlie rather than Alice.
Kudos to mikeazo for finding a mistake, hopefully fixed.

In a comment to the present answer, the protocol is extended by adding:

Alice sends Bob a pre-master secret encrypted in Bobs public key; then both of them use this premaster to calculate master secret.. and communicate using that key"

That extended protocol is still vulnerable to an attack where Charlie impersonate Alice with respect to Bob. Charlie performs as in the first attack, then

In fact, no addition after the protocol can protect against a MitM attack, unless it uses another public key of the participants, or another padding scheme with the existing key.

That's because Alice's behavior allows using her as a decryption oracle: by participating in the beginning of whatever extension of the protocol, Alice accepts doing steps that can be abused into the equivalent of decrypting anything with her private key, and since no other use is defined for her private key, making a fake connection attempt with Alice is as good as having Alice's private key.

The protocol can be strengthened, and the unclear "encrypt with private key" removed, as follows.

We consider an asymmetric encryption scheme with encryption $E_{Pub}(P)\mapsto C$ and decryption $D_{Priv}(C)\mapsto P$. We assume an infrastructure to verify the validity of public keys.

A participating entity $A$, when communicating with (alleged) entity $B$

Messages are exchanged at steps 1, 5, 8, and 10 only. The order in which messages are sent and received in these steps is left unspecified, so that $A$ and $B$ can proceed without waiting for the other side between steps involving message exchange. Step 2. is necessary, otherwise an adversary reflecting what Alice sends will successfully make Alice accept whatever information she sends at step 10.

This protocol is better than the original. At least, a passive eavesdroper can not decode the information exchanged at step 10, as would have been possible in the original protocol. However this scheme is still NOT secure against a MitM attack assuming only that $E_{Pub}(P)\mapsto C$ perfectly preserves confidentiality. In particular, an attack is possible when $E_{Pub}$ encrypts each bit of the plaintext $P$ separately; finding this attack is left as an absolutely necessary exercise to any reader diving into protocol design.

I think you have to specifically define what you're trying to do. Just "authentication" doesn't quite make sense from a practical stand point.

I can thinking of saying "hello" to someone for the purpose of "ok, if you get a hello from me then attack!!", but that protocol would look differently than what you're trying to do.

Why would you just "authenticate"? Can you help me out with that one?

Exchanging message for the purpose of sharing private symmetric keys makes sense, or sending each other secret messages just using asymmetric keys even makes sense (though slow, obviously), but just "authenticating" is odd .. and really doesn't do anything, because without the shared symmetric keys there is no promise that future chat will not be vulnerable to a MITM attack.

And therefore this is probably the best place to look for attacks. It may also be that you don't understand the question as asked, because it'd be odd for a professor to ask it that way. You might want to revisit the problem statement.

We (and your professor) can generously assume for you what it should do, but that's not really how you define protocols :)

Also, if you really are just 'authenticating' (whatever that means) why not just sign a timestamp and send that to each other? Again, I'm not entirely clear on what you're trying to achieve so I pose that really only to inspire an answer.

Perhaps you're trying to come up with a scheme that establishes that both parties have talked and confirmed that they're still alive at the current date. That, again, is a different protocol than what you're trying to do.

In particular, it suffers from an attack in that the final message could be delayed permanently. How does bob know that alice got his final message?

BTW, you mentioned this is like ssl client/server hello. yes those are in the clear, you'll also notice they don't involve certificates or are encrypted (which comes later in the handshake). I think that false analogy is another example of the root of your misunderstanding of the problem.

3
What is sent on the initial communication with Kerberos?
11
Can one have an authentic, but repudiable, message without a previously shared secret?
2
Is this method for exchanging private key using RSA sound?
5
Diffie-Hellman Key Exchange with Authentication: Man-in-the-Middle query
0
What are the potential (major) flaws in this security scheme?
0
Is this a good communication scheme?
0
Entity authentication protocol by encryption
3
Public-key/asymmetric encryption where you can only leak the decrypted message by leaking your password