How exactly was the finalist chosen in the NIST AES competition?

I was just reading the Stick Figure Guide to AES and came across an interesting table explaining how the winner was chosen: 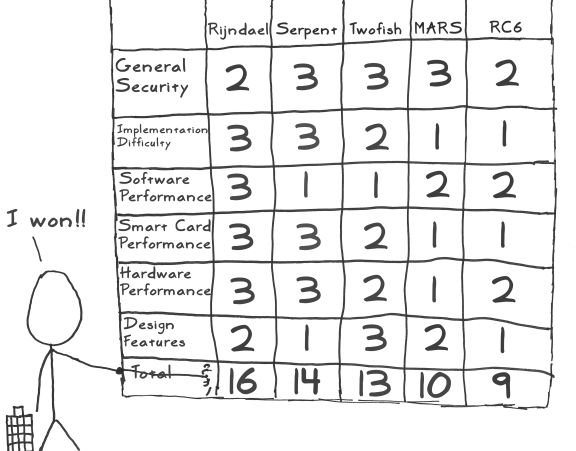 Unfortunately the NIST site is down so I can't gain further information about the approval process so I was hoping someone here would know in more detail.

Those questions aside and assuming the magic numbers above were arrived at a fair and equitable process without bias or hidden agendas, it seems to me this table or ranking system is still missing a "weighting" criteria. All categories seem to be weighted with the same importance. That is "Smart Card Performance" is equally important as "General Security". That seems incorrect. I would argue that security is of the utmost importance so that should have a higher weighting relative to the other criteria which would be secondary concerns. A good quote would be:

I wondered what would happen if I applied a high weighting factor to security and left the other points as they are. For example:

Now Serpent is first equal with Rijndael with Twofish coming in a close second. Interesting.

What about if I am developing a software product, I don't care about about hardware performance or smart card performance so I can rule those two out completely in my decision. The table might look like this:

Now Twofish is the winner and Rijndael is second equal with Serpent and MARS. MARS might even be more attractive with its variable key size up to 448 bits.

My overall point is that Rijndael, Serpent, Twofish and MARS all appear to be within the same ballpark quality range as far as block ciphers go and this rating criteria. There might be a more accurate mathematical way to apply a weighting factor. If I was revamping the security on a project and concerned about NSA involvement in weakening encryption standards then I could re-weight some of the criteria and priorities to suit my project's specific goals. I might decide on a different algorithm from Rijndael. Back in 2000 Rijndael might have suited the US government's purposes and planned surveillance agendas but not my project's. I would compare it to selecting an algorithm just like TrueCrypt gives you the option of choosing between 3 different algorithms. Would that be a reasonable call?

At the time of the competition (I can talk about it, I was there), there was a lot of discussion and various people showed arguments. However, there was never an official, publicly known "board of scores" with totals and definite rules, as the pictures you show seem to purport. It is possible that the NIST people did make something similar internally, but they certainly did not publish it. From the outside, the choice has been made by NIST in "some way" and they then provided qualitative reasons, not really quantitative. NIST never bound itself into following strict rules; they wanted to remain in control of the whole proceedings.

The picture still conveys the main reasons why Rijndael was chosen:

During the round conferences, where cryptographers who meet to talk about the AES candidates, some informal surveys were conducted, where people could give "scores" to candidates. While Rijndael did not necessarily elicit the best marks from everybody, nobody really hated it, so it looked fine as a future standard.

All of this, of course, depends on quite arbitrary assumptions on the usage context. NIST wanted an all-purpose block cipher, suitable to a large range of hardware platforms. If you target a specific system (e.g. for disk encryption on your PC), then this may point at another algorithm; for instance, RC6 is faster than Rijndael on a PC (except if the said PC offers the AES-NI instructions, of course).

The really good thing about the AES competition is not that it came up with a good, strong algorithm; what matters is that almost all candidates turned out to be good and strong. Among the 15 candidates, only two were "broken", and then only in an academic way. The trust we can have in AES comes from that: the AES competition proved that we apparently knew how to design algorithms that nobody else knows how to break (that's about as good as you can get with symmetric cryptography).

Not the answer you're looking for? Browse other questions tagged encryption aes block-cipher nist standards or ask your own question.

-1
Why did FIPS become the AES Standard . What is wrong with Twofish and Serpent?
1
Why did Rijndael become AES; what is wrong with Twofish and Serpent?
3
Is there a real purpose to use Twofish, Serpent or Threefish instead of AES?
3
Why are twofish or other algorithms not NIST approved, are they still safe?
5
Is there a standard method to compare hardware-implemented ciphers?
0
Database row level encryption scheme
0
Security of ChaCha compared to AES and Serpent
0
AES vs other types of encryption such as Twofish

11
XSL on serpent and rijndael - which is most affected?
8
Rijndael vs. Serpent vs. Twofish: General comparison
8
What is 'security margin'?
18
Why was the winner of the AES competition not a Feistel cipher?
3
What is the fastest block cipher in the (Intel) world?
15
NIST Diffie-Hellman prime: how was it picked? Where did it come from?
2
What 'exactly' are AES dual ciphers?
6
Why was Rijndael the only cipher to have a variable number of rounds?