Do any non-US ciphers exist?

As an Iranian Cryptology student in one of the most well-known Iranian Universities called Sharif University of Technology, I want to add this to the answers.

There doesn't seem to be any National Standard Cipher here in Iran. But It doesn't mean that there shouldn't be any classified cipher being used by the military or the revolutionary guards. As I am familiar with universities affiliated to Iranian military, there might not be the enough confidence for developing a reliable national cipher here.

I should mention that modern cryptology is relatively a new science in Iran and there are few researchers and scholars working on these topics here. Ciphers like AES, RSA and SHA-256 are quietly common among the scholars and are being used in industry now.

In recent couple of years the government and the military forces budgeted more for researches on information security related topics. One of the most famous conferences on information security and cryptography in Iran is named "ISCISC" the latest held was ISCISC13 the proceedings of english papers on this conference would be indexed on IEEE journal.

Indeed, the US is known from some crypto-related competitions that were/are open to anyone and they surely will do ample of government research related to cryptology, but you need to be sure that you differ between “they selected it” and “they created it”. There is a big difference! For example: what we now call AES was selected through an open competition by the USA, but the cipher design that became AES was not created by the USA.

Of course there are other countries and states that are known to be the origin of different ciphers, but listing them all would be a bit too broad. Instead, I’ll give you a quick heads-up: 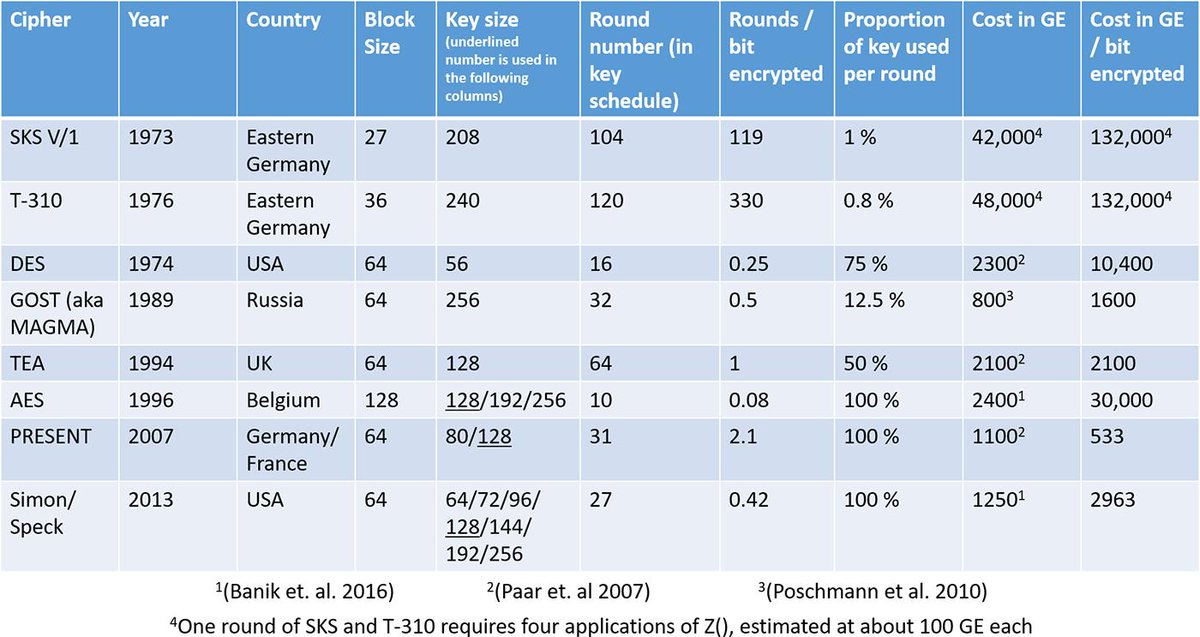 Also, on page 3 of "The Design of Rijndael: AES – The Advanced Encryption Standard." by Joan Daemen and Vincent Rijmen (the creators of Rijndael – also known as AES), you can find a neat table that shows a list of the 15 AES candidates that were accepted for the first evaluation round, including their country of origin.

For your convenience, here are those 15 candidates:

From the 15 candidates that made it into the first evaluation round of the AES competition, only 5,5 originated in the USA. That’s a mere $36 \frac{2}{3}\%$ percent of US ciphers in their own cipher competition.

The answer is yes, non-US ciphers exist and are in fact very popular. Actually, some who are looking for alternatives, opt for non-NSA/NIST ciphers, for instance Salsa/ChaCha from DJB (who is US citizen). A lot of ciphers have been developed in EU and Japan. China definitely has developed ciphers for its own use, just like many other countries.

Why USA is big on cryptography?

USA represent large amount the world market for high tech products and know-how, as well as representing significant chunk of high-tech jobs. In addition US has quite few of the best technical universities (all of the top 5). Already from this it would be easy to expect that a lot of research on all areas of high-tech to take place in USA. Including, of course cryptography.

People from USA have produced many of the most popular cryptographic algorithms. One good example is SHA-1/2 families, designed by NSA. Those are the widest used hash algorithms today.

It is expected that where USA has lead is the cryptographic know-how and analysis skills outside public information (i.e. what NSA knows but others don't). USA has many classified ciphers and other cryptographic algorithms in use which are not known outside the USA, for some see NSA Suite A Cryptography. The algorithms include at least: MEDLEY, SHILLELAGH, BATON, SAVILLE, WALBURN, JOSEKI-1 (according to that Wikipedia article). Non-suite A algorithms include e.g. SKIPJACK, FASTHASH, JUNIPER.

However, to be the latest NIST approved hash family, SHA-3 (Keccak) as well as AES cipher have been mostly done by european cryptographers. Most of their inventors are Belgian, with Italy involved in Keccak. It was USA (NIST) that held the competition. Thus, I would say that actually much of work inventing ciphers in academic world has moved elsewhere already. In fact, in many cases things are international co-operation, with people from US and abroad.

Validation and verification of correctness of cryptography

Where USA has been strong lately in cryptography is at least validating correctness of the implementation. All around the world, FIPS 140-2 validation is recognized as one of the most important validations cryptographic module may get, and fairly many governments used to see it as and endorsement.

This has caused people to start looking elsewhere and to distrust things invented in USA, especially ones invented by NSA, for instance, some of the currently deployed ECC curves. The alternatives include algorithms from US, but from parties not afflicted with NSA and NIST, like Dan J. Bernstein.

For algorithms invented elsewhere that US and not endorsed by NIST, you may want to look at ECRYPT. There you may find for instance, Camellia (Japan), Rabbit (Denmark).

Cryptographic algorithms in Iran and China? First it is important to acknowledge that cryptography is restricted in both of these countries. This means that for outsider, it is not easy to know very much. The research and know-how is more concentrated on government than e.g. on EU.

SMS4 cipher has been used in WAPI (Chinese Standard for Wireless LANs).

For information on Iran, see the answer by Habib, which covers that area very well.

The Serpent Cipher was developed outside of America, and isn't maintained by an American group. It came in 2nd place during the AES competition. It has a higher safety factor than AES (Rijndael), but isn't as fast.

And there are stream ciphers being developed and validated by eSTREAM in Belgium. The Salsa20 stream cipher, by American cryptographer Daniel J. Bernstein, has been gaining a lot of traction.

10
Notable Non-Western Cryptosystems that have been widely deployed?

10
Are stream ciphers no longer considered by NIST?
11
What informal indicators exist for estimating the computational infeasibility of cryptographic problems?
13
When did Kerckhoffs's principle become fully accepted in design and practice of modern ciphers?
1
Best non-digital cipher?
28
Examples of modern, widely used ciphers that suddenly fell?
3
Have affine ciphers actually been used in practice?
5
Major Block Ciphers between DES and AES competitions
10
Notable Non-Western Cryptosystems that have been widely deployed?
11
Common Classical Ciphers