Flaw in the security definition of *Stateful* Authenticated Encryption?

I'm in search of the correct definition of a stateful authenticated encryption scheme (sAE), and its related security notion. This has been treated several times in the academic literature, however, all the papers I've read contains a discrepancy between how they state the security goal in informal English and their formal security game. In particular, their formal specification of the security game always contains a flaw that allows for a trivial win for the adversary.

The first paper to formally define a notion of security for sAE was Bellare et al in Authenticated Encryption in SSH: Provably Fixing the SSH Binary Packet Protocol. They define the interaction between the encryptor and decryptor to be in-sync, if at any point in time, the sequence of inputs to the decryptor is a prefix of the outputs of the encryptor. They are out-of-sync if they are not in-sync. This is their informal statement of the security game capturing stateful privacy IND-SFCCA (note that this paper splits the security of an sAE scheme into an individual security requirements for privacy and one for integrity, whereas later papers merge these into one combined game. The game formulations are still very similar, and are also equivalent in terms of security: Appendix B):

And this is their formal definition (Appendix A. Def. A.2): 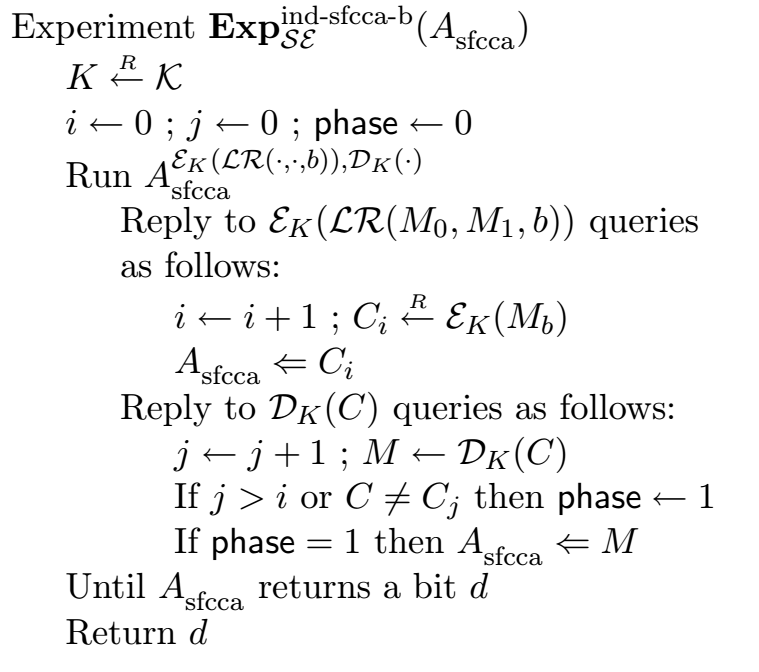 The flaw: In the formal definition, the $\mathcal{D}_K$ oracle returns something other than $\perp$ if: (1) $j > i$ i.e., $C$ is a proper out-of-sync message or (2) $C \neq C_v$, i.e., the submitted ciphertext was not the latest ciphertext output from the encryptor. Notice a flaw with this?

Now you might simply dismiss this as a trivial "typo"/oversight, and that the authors really meant to write something equivalent to their informal description. However, this security definition, with the same flaw, has been repeated in several other papers by different authors:

In addition, you have the paper by Brzuska et al Less is More: Relaxed yet Composable Security Notions for Key Exchange, who provides a summary of the above definition (Def.16, p. 29) in their own (and different) framework, recreating the same flawed behavior!

So what's going on here?

Answering my own question since there haven't been any response.

In fact there is no flaw in the definition. Nor in my attack per se!

However, the entire point of this definition is to rule out non-stateful schemes (and stateful schemes that doesn't incorporate the state in a sufficient manner) as being secure. In particular, when the adversary asks for the decryption of $C_2$, the decryption algorithm is in state "1", not "2", i.e., expecting to receive a ciphertext created by an encryptor who was in the "1" state when he created it. Thus, if the stateful scheme is worth its salt, the decryption of $C_2$ better result in failure, i.e., $\perp$. Hence, it's no problem to return the "decryption" in $\mathsf{phase} = 1$ anymore, since it will not give the attacker any distinguishing advantage.

I mistakenly thought that this attack applied generically to all encryption schemes, but forgot that non-stateful schemes should fail this definition.

Not the answer you're looking for? Browse other questions tagged provable-security authenticated-encryption security-definition or ask your own question.

6
Exact mathematical definition of simulation based security?
10
Proof that IND$-CPA implies IND-CPA?
4
Definition of the Decryption oracle
10
How to prove the security of block ciphers
3
Why is the simulation required in these identity-based encryption security proofs?
0
How does the challenger choose the message randomly in the one-wayness security game of PKE?
2
Not understanding deterministic authenticated encryption (DAE) security definition