What is adaptive zero-knowledge?

In this paper on pg. 1241 the authors discuss bullet point on Adaptive Zero-Knowledge : 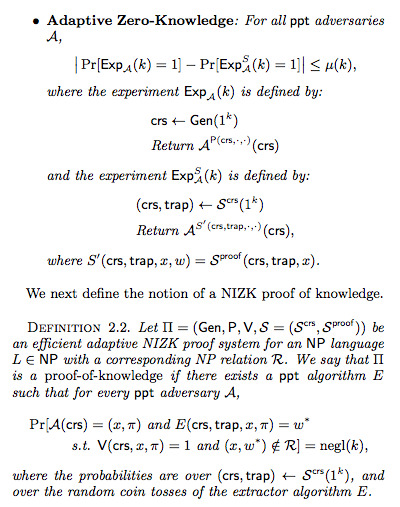 I am new to Zero-Knowledge and I am having trouble understanding what they are saying.

Also, when they use notation like $A^{S'(crs,trap,.,.)}$ is really confusing - I have no idea what this means.

I'm not looking for a complete breakdown of what this means - but if someone could even summarize what the importance of adaptive zero-knowledge that would be great.

Ok, here we are speaking of non-interactive zero-knowledge proof systems for some language $L\in NP$. We there have a pair $\sf (P,V)$ of probabilistic polynomial time algorithms (called the prover and the verifier) where both have input $x\in L$ and $\sf P$ additionally holds a secret witness $w$ for membership of $x$ in $L$ and wants to convince a verifier $\sf V$ of this fact without revealing $w$.

One requires (a bit informal):

Now, adaptive zero-knowledge means, that soundness and zero-knowledge are with respect to adaptive adversaries. For soundness this means that an adversary $\cal A$ is allowed to choose $x\notin L$ after seeing the $crs$. For zero-knowledge one requires from the simulator $\cal S$, that $\cal S$ has to output $crs$ first and afterwards produce the simulated proof $\pi$. These two steps of the simulator are denoted as ${\cal S}^{crs}$ and ${\cal S}^{proof}$ respectively. Note that these two definitons are stronger definitions than in the static setting (described in the beginning).

Since the authors are talking about zero-knowledge proofs of knowledge for some $NP$ relation $\cal R$, they additionally require a property known as knowledge extraction. Basically this means that the witness $w$ can be extracted from the proof transcript (this extractor is the algorithm $E$).

They also use a common reference string $crs$ with a trapdoor $trap$ which is required in order for ${\cal S}^{proof}$ to simulate a proof without knowing the secret witness (you may look for instance at Groth-Sahai NIZK proof system for examples).

The notation ${\cal A}^{S'(crs,trap,\cdot,\cdot)}$ means that the adversary $\cal A$ has oracle access to the algorithm $S'$ where the inputs $crs$ and $trap$ are fixed and the latter two input arguments (indicated by $\cdot$) can be arbitrarily chosen by $\cal A$. Hope that helps a bit.

Not the answer you're looking for? Browse other questions tagged zero-knowledge-proofs multiparty-computation or ask your own question.