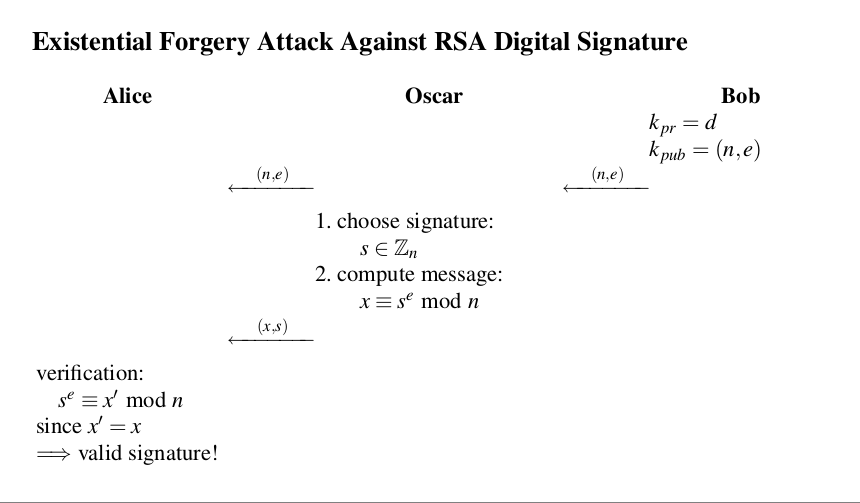 The attacker chooses the signature first and then computes the message. As a consequence, he cannot control the semantics of the message x

And what if Oscar send to Alice his public key instead of bob's ?? How dose the RSA Digital Signature protect against such an attack??

why the attacker can't control the message??

Well, if he could control the message, that is, given the value $x^e \bmod N$, find $x$, well, he just solved the RSA problem, and we believe that he can't do that, or at least, he can't do that in any modulus that we expect is secure. Yes, you can do a brute force search over a $N$ as small as 11021; that indicates that such an $N$ is too small to be used for RSA.

And what if Oscar send to Alice his public key instead of bob's ?? How does the RSA Digital Signature protect against such an attack??

If Oscar sends his public key to Alice, and Alice does accept it as Bob's key, then yes, Oscar will be able to sign any message, and Alice will mistakenly believe it came from Bob (because it was signed using what she thought was Bob's key).

How does RSA protect against this? Answer: it doesn't; that's a problem that RSA assumes that is protected against by some higher level protocol.

The issue is "how do we bind a public key, which is a bunch of bits, to an identity in way that we can trust". There are a number of ways to address this.

One such way (which is fairly common in practice) are certificates; we have a message that states "Bob's key is [public key], as attested by Trent", and that message is signed by Trent. If Alice trusts Trent, then Bob (or Oscar) could send that certificate to Alice, and she can validate what the certificate says (because she trusts Trent). Oscar cannot generate a certificate with his key and Bob's identity, because Trent will not issue such a certificate (and Oscar can't fake Trent's signature on something he can generate).

There are other ways of solving this as well; that you solve it is obviously crucial.