Here is this data redrawn in SHA-256 per year with a $\log_2$ vertical scale, to facilitate comparison with key size in bits. I believe the notable growth in 2010-2011 was the rise of GPUs, while the 2013-2014 period corresponds to an increased use of ASICs. Nowadays, bitcoin mining is mostly performed using highly specialized ASICs. Recent hardware advertises 220 T SHA-256/s at 15 pJ/SHA-256 (3250 W power on wall) for \$3769. It's sold out, and the planet struggles with carbon emissions. 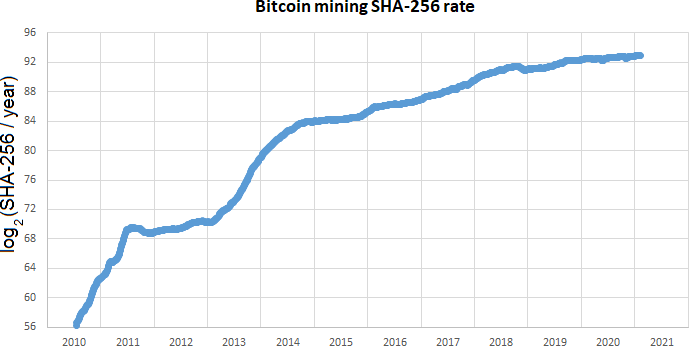 Not the answer you're looking for? Browse other questions tagged cryptanalysis brute-force-attack key-size or ask your own question.

0
Are 80-bit keys considered secure as of late-2017?
55
"SHA-256" vs "any 256 bits of SHA-512", which is more secure?
18
How many hex digits do I need to compare when manually checking hash functions?
15
Which public key cryptosystems are not based on number theory?
6
How secure is Salsa20?
4
Are there valid attacks on full SHA-1?
3
Why not use ordinary hash functions for password hashing?
3
How insecure is AES-128-CTR to encrypt any kind of data using the Ethereum keystore file format?
2
How to explain just how secure AES is in layman terms?
1
80-bit security and attack time
See more linked questions

2
Why is the security of block cipher not a function of key and tweak?
5
Effective security of block cipher – equal the key size, or half the key size?
0
BruteForcer XOR (bfxor.exe) to attack 64-bit keys and longer
13
Password entropy much lower than entropy of encryption keys. Why is this acceptable?
3
Does one time pad randomness help brute force attacks?
0
Is there a way of increasing the time to brute force a cipher, but by increasing the ciphertext size instead of the key size?
1
Comparing DES and DES-X variation: $Enc(m) = DES_{k_1}(m \oplus k_2)$
2
How to protect against brute force attacks in the case of a small dictionary?
0
What is the easiest encryption/cipher to brute force?