I have a question about Pseudo Random Functions.

which is distinguishable from random.

Intuition. First an informal overview. View F_k and f_k as tables. The adversary is filling in a table for F as he makes queries, and is trying to figure out if the values he's getting are random, or are based off the (unknown, randomly chosen) table f. 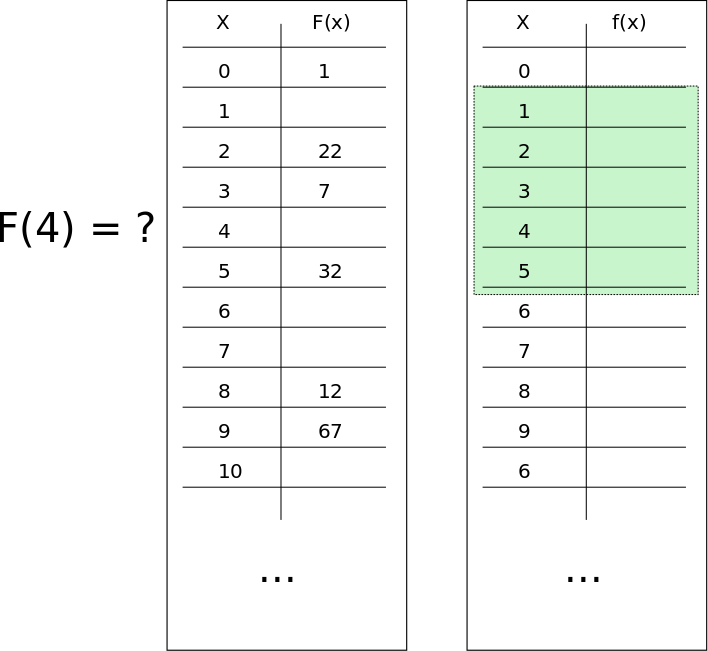 And, crucially, that's where it stops. The fact that this chain eventually stops, which is implied by the fact that the number of queries is less than $2^n$, is vital to the argument.

Basically, the only points of f that

...are those points shaded in light green. This is easy to see if one views f as being defined through "lazy sampling", with its outputs generated on-the-fly as needed.

And that's the gist of the proof.

We wish to bound the PRF security of $F$:

Let $\rho'$ be a random function. Then for any adversary $A$ making $q$ queries and running in time $t$:

Therefore, let $g = \rho'$, but with the domain restricted to $\lbrace x_r - \delta, x_r + \Delta - 1\rbrace$. The purpose of introducing $g$ is to remove some of the clutter from the coming counting arguments.

This proves the claim.

Therefore as long as the criteria $r < 2^n$ is met, the behavior of $F[\rho']$ is statistically identical to $\rho$, a random function. Hence,

Yes, it is a secure PRF, as long as the attacker can make at most $2^n-1$ queries. The key lemma is purely information-theoretic in nature. From this lemma, you can prove your result using standard methods.

We made $2^n-q$ choices, and each choice had $2^n$ possibilities, and all the choices were independent, so by the product rule, there are $(2^n)^{2^n-q}$ functions $f$ that satisfy the desired conditions. $\Box$

Proof. Follows directly from the lemma. Just consider the transcript of queries to $A$'s oracle; the probability of each possible transcript is the same regardless whether $A$'s oracle is $R$ or $U$.

This proves the following result:

Conversely, if the adversary can make $2^n$ queries, the adversary can distinguish $F$ from random simply by summing all of the outputs of $F$: we will have $\sum_x F_k(x)=0$ but for a uniformly random function $\sum_k U(x)$ is zero with probability $1/2^n$.

Otherwise, if $R$ is a random function, then the output looks random. Hence, $A'$ breaks the security of $f$.

Not the answer you're looking for? Browse other questions tagged provable-security pseudo-random-function or ask your own question.