Is this an acceptable implementation of ARC4 encryption for my system?

I am building an open source hardware system that will be used to control things over the internet. The system consists of a Base Station and Modules which use wireless communication at 2.4GHz to exchange data.

Now I have come to the point where I need to protect the transmitted RF data against re-transmission and decryption. I also need to protect the system so that nobody can pose as a Base Station and send RF packets to some Module and for example turn on my lights or unlock the door.

Details about data that needs to be protected:

Since this project is implemented on microcontrollers with limited amount of RAM (some 4kB for the entire thing) and FLASH memory for program (usually 32kB) there is not much room for state-of-the-art encryption algorithms and hash generation functions for MAC. There is also a limitation of data that is being transferred to 29 bytes in each packet. Data should not be split to multiple packets and re-assembled on the receiving side, so 29 bytes is all we have to work with.

These are the specifications of my current implementation:

27 bytes of unencrypted data message is first padded with SYNC byte (the last byte of final ARC4 key), then this is padded with CRC-8 checksum calculated over the previous 28 bytes. These resulting 29 bytes are encrypted using current ARC4 key (27 bytes and the SYNC counter (1 byte)). 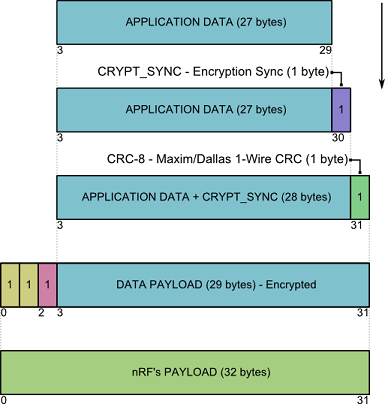 I hope I didn't give too much irrelevant information in this post, this is my first time to implement some kind of encryption, and first post on SE.

I have decided to abandon this design as it is not safe. Thanks to poncho for suggesting the alternative. I have found CMAC AES implementation in AVR411 document which also targets the same hardware I am currently using. You can find this document by simply searching for AVR411 on Google.

There are a bunch of problems with this protocol.

First of all, the way you generate your RC4 key (concatenate a secret key with a public nonce) is known to be weak. The one thing that saves you is that you only do it 256 times before generating a fresh secret key; however it is known that if you were to do it, say, 2000 times with a secret key, you would have a small probability of leaking the secret key. In my opinion, that's close enough to be scary; I'd rethink this.

Now, on to your actual question:

That's putting it mildly; it's a very bad way to implement it. The problem is that CRC-8 is perfectly linear; someone who intercepts a packet can flip bits in the ciphertext, and then predict which bits in the CRC-8 he would need to flip to compensate; the decrypted plaintext will have precisely those bits flipped. The only thing that can save you is you will reject the same message twice; an inventive attacker can get around this by causing the reception of the authentic message to fail.

It would appear that the main restriction you have is on memory (for the program and data), and not so much on execution speed. If so, I would suggest you look at small AES implementations, such as talked about in this stack exchange. They would appear to fit well within your budget, and can be used as the basis for a truly secure protocol.

Not the answer you're looking for? Browse other questions tagged encryption hash mac or ask your own question.

2
Is it safe to AES-CBC and AES-CMAC both using the same key?

3
Is this an acceptable authenticated encryption?
5
Encryption for a short packet size
0
Authenticating small packets
2
Is it a good or bad idea to include a password's salt in the calculation of a MAC?
0
Encrypt than MAC scheme for Home Security system
0
AES CBC MAC Generation
3
Setting MAC field to all-zero to indicate unencrypted data