Would it be secure to use random numbers from random.org in a cryptographic solution?

At first I was thinking if a large pool of them was obtained then a small subset of them could be used randomly to make the fact they are known of less use. Then I realized that no matter how many random numbers were obtained this way, it would still be a smaller number set to explore in attempting to crack the cryptography.

Update: Random.org supports SSL over HTTPS, but are not encouraged for use in cryptography.

The more I think about it, the less I would be willing to use Random.org for any sort of cryptographic application. My reasons are listed below.

That said, these reasons don't necessarily answer the question. They only give insight as to why I personally wouldn't use Random.org for cryptography. Would it be secure to use Random.org in cryptographic solution? Possibly. There really isn't enough information to really know.

It is so easy to create cryptographically-strong random numbers in ways that are known to be strong that adding new methods that add new risks is not advisable. However, if you have an existing method that is known to be secure and has the ability to take in additional sources of randomness in way that cannot do harm even if they are known to an attacker, than go ahead and add them. You have nothing to lose.

In cryptography, randomness is mostly about being unknown to any attacker. Any attacker could observe your download of these random numbers, and now they are not really random since the attacker knows them too.

There is an article from Crypto'97 which describes something which looks like that: it is a secure key exchange system which defeats memory-bounded adversaries. This assume a shared source of randomness which broadcasts random numbers; anybody can listen to it, including any attacker. Two parties who wish to get a shared key record just a few chunks out of the random bits, noting the position of each chunk in the stream (say, the exact emission time). At the end of the day, they send to each other the list of positions; if they recorded enough, there is high probability that there are a few chunks they they both recorded, and they can use these as a shared key. On the other hand, an attacker willing to learn that key would have to record quite a lot of the stream in order to have a fair chance of having all the chunks that the two parties have in common.

This key exchange mechanism is safe as long as the random source broadcasts data at a very high rate, so that recording all of a day's broadcast is not doable. So it should be in gigabytes per second or so.

In a way, using the numbers from random.org is like using this model: you record insecure random numbers, and at the end of the day you assume that you could get some that the attacker failed to record himself. To get a key out of your pool, you could for instance hash the whole of it with a secure hash function such as SHA-256 (don't pick numbers out of the pool; instead, use a hash function, which will not "forget" any entropy). Still, in practice, this fails on several accounts:

So, to make the story short: no, random.org is not useful to security or cryptography.

Since you cannot be assured that random.org is not retaining a copy of the number, nor is its transport to you necessarily confidential, you should think of numbers from random.org as public randomness. That is perhaps pessimistic but it will lead you to use such numbers in the correct manner.

Obviously, public randomness is not useful for generating secrets in cryptography.

However there are a number of scenarios where public randomness is perfectly ok. Here are a few:

A source of public randomness is sometimes called a "beacon." It is an important enough service that NIST is in the progress of creating one. Their whitepaper explains some of its uses and mentions random.org. Another option is to use financial data, which we showed to have sufficient entropy.

No, it would not be secure… especially not without specific precautions and protocol implementations – which random.org doesn't offer in the first place. Also, random.org is – as far as I know – not certified, which downgrades it from a “trust” point of view.

But when talking about such randomness providers, I always like to mention a more professional project too, because many people aren't aware of its existance: the NIST Randomness Beacon… 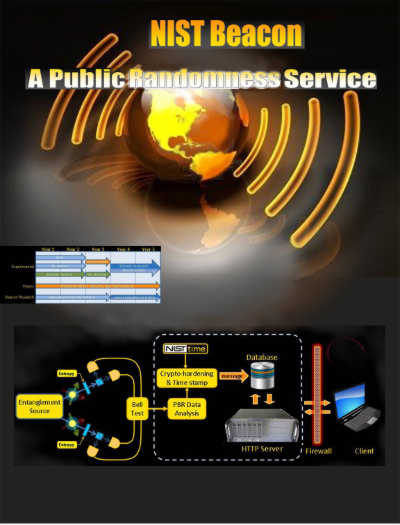 If you check the project homepage at https://beacon.nist.gov/home you'll notice that even that project clearly states:

WARNING: DO NOT USE BEACON GENERATED VALUES AS SECRET CRYPTOGRAPHIC KEYS.

And there's a good reason for that: they are still researching potential implementation options as well as potential security strengths and weaknesses of such a solution.

I wouldn't count on random.org having solved all the problems the NIST Randomness Beacon is still researching.

As you noticed yourself, random.org states something similar:

We should probably note that while fetching the numbers via secure HTTP would protect them from being observed while in transit, anyone genuinely concerned with security should not trust anyone else (including RANDOM.ORG) to generate their cryptographic keys.

In terms of security, I therefore would personally recommend to distrust data from services like random.org even more than the beacon data generated by the NIST Randomness Beacon project in its current research phase… and until further notice, you aren't supposed to trust the Beacon data either.

Wrapping it up: it would not be secure to use random numbers from services like random.org in a cryptographic solution. This is underlined by the individual services' statements.

There are ample well-vetted and cryptographically secure alternatives to the need of falling back on using such services. It would be smarter to use those than to trust a 3rd party that puts emphasis on the fact that you should not trust its data for crypto purposes…

Sites like random.org may have their place, but not in the realms of cryptography.

It would be secure only

So I'd say it is not secure, in general.

The short answer is: the online random number generators (or better, online radioactive/quantum sources) have high entropy and are unpredictable, but they lack the element of guaranteed privacy needed to be used verbatim as a secret key.

Notice that privacy of thought is assumed in the usual Alice and Bob crypto theory stories; mind reading each other or the narrator is not allowed.

Any serious person should not trust random.org to be up all the time. It's maintained by a non-commercial entity that has no economic value in staying up all the time. So your server would only get random numbers as long as it is available. That should be enough to stop any serious usage (beyond the security reasons mentioned by all the others).

I could see a scenario where you have a weak entropy pool, and you use random.org to add additional entropy to your own pseudo random number generator. If it is down, you may fall back to your own weak entropy sources. Note that you need to seriously test if your fall back scenarios work though, you should not get stuck once random.org is suddenly not sending any data anymore.

23
How useful is NIST's Randomness Beacon for cryptographic use?
15
What is the use of REAL random number generators in cryptography?
1
Is random.org truly reliable?
1
Truly Random Values

5
Feedback on rolling my own entropy gatherer
2
Is a Mersenne-twister cryptographically secure if I truncate the output?
4
Cryptographic random numbers for key generation
6
Are there any practical ways to transfer random data securely?
16
Can we use a Cryptographic hash function to generate infinite random numbers?
2
Faster Shuffling for a Simple Application
13
What issues are there while using Linux's /dev/urandom for generating cryptographic keys?
1
Dieharder How can I make my input file suitable for Dieharder?