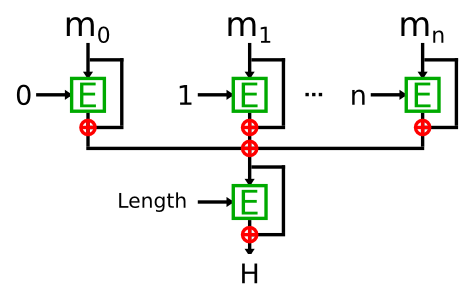 Is such construction known to be insecure? Or is it secure?

It is insecure, since the XOR of many ($n$) independent compression function is much more vulnerable to collision attacks. The generalized birthday attack finds a collision with complexity $$ 2^{\frac{\text{block size}}{1+\lg n}}. $$

Dmitry said that a collision in the xor can be found with a generalized birthday attack.

Actually, it's a lot worse than that; second preimages of sufficiently long messages can be found in polynomial time; hence an enormous block size (which might help against the birthday attack) doesn't help.

Let us call the size of the output of the ideal block cipher $n$. Then, let us consider a message that consists of (at least) $n$ blocks; and for each block, we consider two distinct alternatives, at position $i$, we would have arbitrary selected blocks $M_i$ and $M'_i$.

If we have a target value $Z$ for the exclusive or's (which we would have for a second preimage problem), we would then consider what sum of $H_i$ and $H'_i$ would exclusive-or to the target values; this can be viewed as a linear algebra problem, and can be solved with, say, Gaussian elimination in time $O(n^3)$

5
HMAC construction based on the combination of two hash functions
1
Hash function and outputs of arbitrary length
15
Are AES-256's related-key weaknesses exploitable if it is used to build a hash?
1
Encrypting with Davies-Meyer hash function scheme
2
Is the IV value in Davies Meyer construction public?
1
Is this a secure keyed hashing construction?
5
Can ChaCha be turned into a collision resistant hash function by xoring keystreams?
2
Matyas–Meyer–Oseas for super-fast single-block hash function
4
Why does FS&K's SHAd-256 construction zero-prefix the inner message?