However, the discussion surrounding the table notes that "one is usually willing to accept an error probability of $({1\over2})^{80}$ when using Algorithm 4.44". Algorithm 4.44 (p. 146) states to use trial division to rule out low hanging fruit (sic).

But according to Note 4.45 (p. 146), Algorithm 4.44 bounds the trial division based on B, where B is based on the time it takes to perform a modular exponentiation versus time required to rule out a small prime by trial division.

If the "proper" number of trial divisions are not performed (for some definition of "proper"), then error rate may not be as expected. I'm reading that from the discussion on page 165, where its suggested to select 't' such that its equal to ${1\over2}\cdot\lg(k)$. Using this formula, it appears a 1024-bit candidate needs 5 or 6 Miller-Rabins test, and not the 2 or 3 advertised in Table 4.4.

Question: how many trial divisions against a table of primes should be performed before moving to Miller-Rabin? In essence, I'm asking how large the prime table used in trial division should be.

(Sorry about the tag. It does not appear there are tags for random-numbers, primality-testing, trial-division or Miller-Rabin)

EDIT (JUN-17-2014): The reason I asked was OpenSSL and Crypto++ random number generation. I did not want ot taint answers with too much context.

The authoritative academic reference on the number of Miller-Rabin tests is this paper: Ivan Damgård, Peter Landrock, and Card Pomerance, Average Case Error Estimates for the Strong Probable Prime Test, Mathematics of Computation, v. 61, No, 203, pp. 177-194, 1993. That's reference [300] in the HAC, and used to derive their Table 4.4.

The authoritative normative reference, which also cites the previous paper, is FIPS 186-4 appendix F.1, with even more down-to-earth prescriptions in the context of generating FIPS 186-4 RSA keys in tables C.2 and C.3, reproduced at the end of this answer.

All the references above consider that $n$ being tested is a random odd integer of specified bit size. Using trial division by small odd primes combined with Miller-Rabin slightly increases the confidence we can have that the number tested is prime compared to MR alone, but that is usually neglected. The main reason to perform such trial division is as a speedup: most of the integers tested are going to be composite, we want to rule them out as fast as possible, and early trial division achieves that.

Note: it is notoriously hard to validate primality-testing code, especially in a black-box setup. MR is popular because it is simple thus relatively easy to proofread, but caution! With large parameters, it is almost impossible to ever reach the second MR test, at least if the witness used is random! We can easily craft test cases that pass trial division, but ideally these should also be Carmichael numbers if we want a chance to catch some improper MR variations, and I do not know if the extensive literature on generation of large Carmichael numbers provides that.

In practice, in the context of RSA, one can do (very) little trial division, following by a number of MR tests according to the following table: 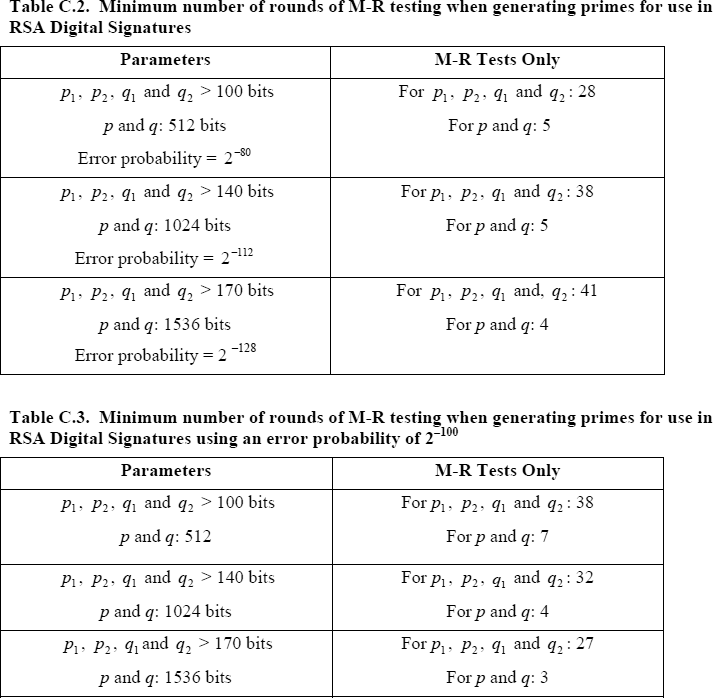 The table from the Handbook of Applied Cryptography is computed for candidate primes taken as odd integers. This is equivalent to using trial division by $2$ only. Note that section 4.48 specifies that:

Using more advanced techniques, the upper bounds on $p_{k,t}$ given by Fact 4.48 have been improved. These upper bounds arise from complicated formulae which are not given here.

So the table lists $t$ values which are smaller than would can be derived from the formulas in the Handbook.

Using more primes for trial division can only decrease the risk of mistakenly decreeing an integer prime where it is not; by doing trial division beyond the simple parity test, you may only incur the risk of doing "too many" Miller-Rabin tests. However, this does not matter much. Indeed, let's consider that you want to generate a 1000-bit prime. I have sampled about 200000 random odd 1000-bit integers (bits 0 and 999 forced to 1, the 998 others being randomly generated). It appears that:

Therefore, there is little point in trying to optimize the $t$ value. The values given in table 4.4 may actually be overkill, especially if coupled with trial division, since they are meant to ensure the $2^{-80}$ probability even with only a parity check. Using $t = \lceil(\lg k) / 2\rceil$ is a bigger overkill even -- but not enough to actually matter. The overwhelming majority of your CPU bill will be spent on non-primes, and will be independent of whatever value you choose for $t$.

Edit: "trial division" by some small primes can be considerably sped up if you integrate it into the candidate generation process. Namely, you randomly choose $k$ modulo $2$, $3$, $5$, $7$... up to $23$ (to keep values in 32-bit words), taking care to avoid $0$ as value for any of these small mods. Then you build up your 1024-bit candidate $k$ with the Chinese Remainder Theorem. This candidate building, and the Miller-Rabin rounds, can be computed without using any actual division anywhere: this is a good thing if you use a platform which lacks a hardware division opcode.

6
Is it possible to fool Miller-Rabin test?
2
Random numbers for Rabin-Miller primality tests
1
ssh-keygen DH Primality Testing
0
Miller Rabin - Error probability of .5 a possibility?
6
How to test implementation of primality tests like Miller–Rabin?
1
Is RSA vulnerable to possible PRNG + Miller Rabin test weaknesses?
4
Magic Number to calculate number of rounds for M-R in FIPS 186-4
0
Trial division + Miller-Rabin complexity
9
Is there a pseudo message that will encrypt and decrypt correctly if one of the primes is a pseudo prime in RSA