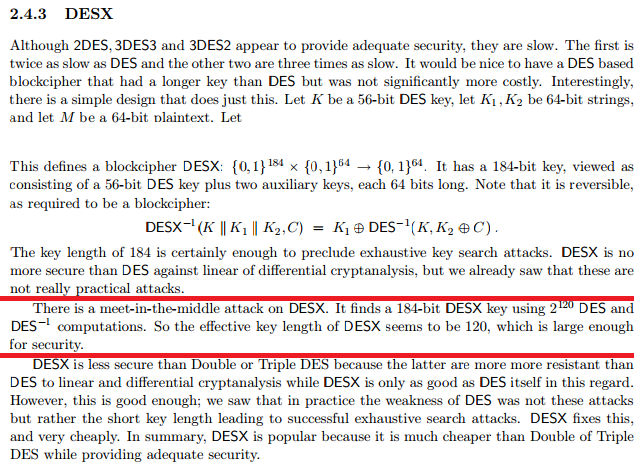 In a standard meet-in-the-middle attack, we would rewrite the first equation as:

and create lists of the two sides (using possible values of $K, K_1, K_2$), and search for common values; the lists (actually, we'd create a list only for the left side, as it's smaller) would account for the additional storage.

However, in the case of DESX, we can simplify this by combining the two equations as:

When we find a $K, K_1$ pair that makes this work, we can compute the correspond $K_2$ values, and test it out with our third known plaintext/ciphertext pair; this additional checking is rare (once out of $2^{64}$ pairs tested), and so can be ignored when doing complexity computations.

And, this observation can be extended to show that the attack against DESX can be performed even faster if we have more plaintext/ciphertext pairs.

Not the answer you're looking for? Browse other questions tagged des complexity desx or ask your own question.

3
Regarding matsui's Paper on Linear Cryptanalysis of DES
2
Can the key-complement property of DES be used against 3DES?
7
Space complexity and cryptography
1
2Des is double secure of DES?
2
Merkle Tree space complexity
1
Chosen plain-text Attack on DES-X with roughly $2^{64}$ DES operations