About the Algebraic Normal Form (ANF) of S-Box in DES

(This paragraph is in the old version)I think this is a very basic problem so it must be researched by so many people. But I can't find related papers. Can someone explain the ANF researches on S-Box of DES or provide some resources for me? Thanks a lot.

This is an explict expression because the left side is a single output and the right side is a polynomial of inputs with degree at most 6.

In algebraic cryptanalysis, reaserchers always represent the relations between inputs and outputs in an implicit way, like $$f(x_1,x_2,x_3,x_4,x_5,x_6,y_1,y_2,y_3,y_4)=0$$ What I want to know is that are there any advantages or applications of explicit form compared with the implict form?

Prior to answering this question, I present a preface about ways of demonstrating a "boolean function". There are two broad ways of representing namely "Boolean form" and "polynomial form".

Turning to ANF, ANF representation of a boolean function can be defined as:

This means: boolean function f consists of n variables which these variables can either 1 or 0 and the result of this function, as well, can be either 0 or 1. With respect to this definition, a boolean function consisting of 3 variables in ANF form could be:

which we can easily sketch in our well-known learned schematic diagrams in high school as follows: 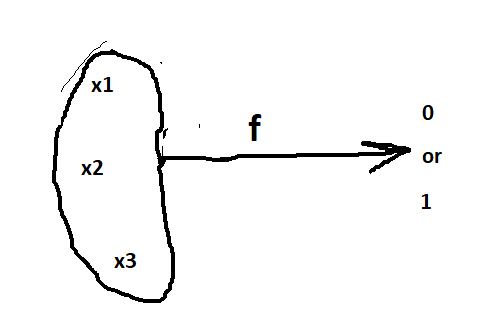 In this scheme, the domain consists of three different variables namely, x1, x2, and x3 which any can either 0 or 1 in the function f representation.

But how this ANF rule is defined?

As I told ANF or the other name of "positive polarity reed muller", is a way of showing a boolean function in a polynomial form with xor operator. Actually, this representation is with the presence of all linear combination of monomials. A simple way of clarifying this definition is as follows:

In this representation, each "a" variable can be either 1 or 0. For instance, the global form of a 2 variable boolean function can be defined as:

For example, we can show AND function in the ANF form as follows:

Before we want to answer the question of why this form of representation is important, we should remark that the part in this representation form that is crucial for cryptographers are coefficients of the terms. As mentioned above example in the AND function ANF representation, the three coefficients a0, a1, and a2 are 0sand the only x1x2 term coefficient is 1.

Returning for explaining the importance of this representation, showing a boolean function with n number variables needs n different number minterms, however, in ANF form, this could be shown with fewer terms and also these few terms give a complete description of that boolean function.

The most important application of ANF form is describing SBoxes with a minimum number of logic elements. The result of this representation indicates the important SBoxes properties such as algebraic order, algebraic weight, linear and affine, completeness, and many others which are widely used in cipher designing and cryptanalysis.

27
How were the DES S-box values determined?
2
DES S-Box properties
11
Evaluating Algebraic Complexity of a S-box
2
DES and using the S-Box 1
1
DES: Computing the output of S-Box 1?
14
Generate ANF from SBox
0
Can I change the S-box and P-box in DES?
1
A bit-sliced implementation (or the algebraic normal form) of the two FIDES S-Boxes
0
Algebraic Normal Form of a function in $\operatorname{GF}(2^{n})$