Hello I am working on implementing a message to elliptic curve point mapping hardware circuit I have done some research and found out the koblitz mapping method: I will be using a field of binary polynomials F(2^163) the equation will be of the form of : $$ y^2 + xy = x^3 + x^2 + 1 $$ 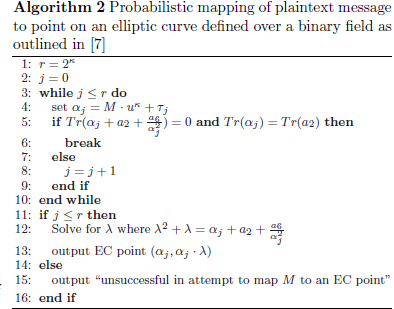 The given algorithm consists of checking the Tr "Trace of polynomial" at first and then solving the quadratic equation based on the chosen coordinate "x" that satisfied the needed trace conditions and obtain "y" the second coordinate I have given to understand that finding the trace of any polynomial C in field 163 is XORing(bit0,bit157) of the given polynomial

But after calculating the Trace and finding the x coordinates I do not understand how to solve the quadratic equation in hardware and how to implement it I have found some reading material suggesting of calculating the H(C) which is the half trace of the polynomial C but my questions are:

1.What is trace of a polynomial and how it is calculated? is it by xoring all bit together from 0 to m-1 ?

Thank you I really appreciate the help. I could not find clear reading material on this matter with a simplified and easy to read algorithm/pseudo-code

Added: I found the following algorithm but I do not know what it's name? and how are the parameters a2n and a2n+1 computed and how they vary for different fields lets say (163) 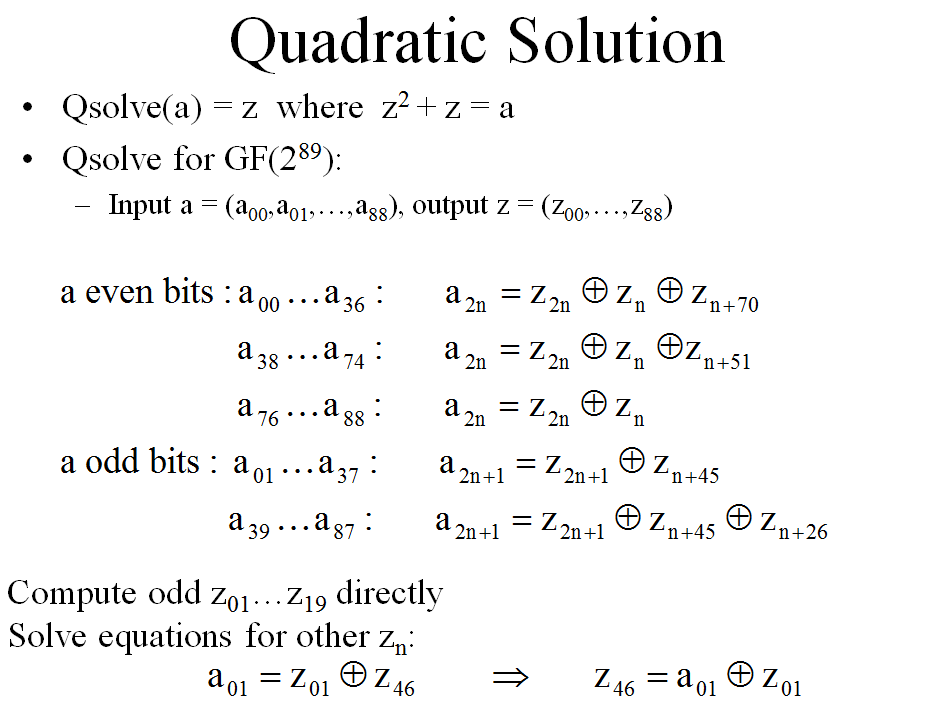 I'll try to give additional explanation on algebraic number and the link with EC.

Let $q=2^{163}$ the finite Field $F_q=GF(q)$, as selected by NIST has some features for doing cryptography. This field has been generated with the irreduccible pentanomial you gave in the table. To understand what the trace of the polynomial is, it corresponds to the coefficient of monom of degré 162, which is Zero in this case. And remembering that any finite field could never be algebraically closed, we can considere all the 163 roots of p, $\{x_0..., x_{162} \}$, which are conjugate each other. The trace of the polynomial is simply the sum of all its roots. But as they are all conjugate, only one root suffices to calculate the trace by repeating square. (Cf ref books). Then we see, that we can define the trace of any element in $F_q$ by $Tr(\alpha)=\sum_{i=0}^{i=162}\alpha^{2^{2^i}}$. This define a linear map (endomorphism) from $F_q$ to $F_2=\{0,1\}$!

And the link with EC ? As fkraiem observes it, you have nothing to do! NIST has done all the work by selecting the field of appropriate size, generating polynomial and indicates how to get the trace for any algebraic element in $F_q$. For this case of K-163 (Koblits Curve) or B-163 (random Curve), and a given $\mu \in F_q$, $Tr(\mu)=\mu_{157}+\mu_0$ snipped from the table you show us.

The Half Trace, can be explained by the fact that in a finite field there is exactly the same number of quadratic and Non-quadratic residues.

Then the Half trace is defined by $\tau(\alpha)=\sum_{i=0}^{\frac{n-1}{2}}\alpha^{2^{2i}}$(Ref N. Smart Elliptic Curves in Cryptography), which gives the solution of the equation. There are generally 2 solutions, and you can select one to build the point, the other allow to select the opposite point. And when a solution is chosen, the point is $P=(\alpha, \lambda.\alpha)$, and a straiforward calculation allow to check that it belong to EC!

Not the answer you're looking for? Browse other questions tagged elliptic-curves finite-field cryptographic-hardware encoding or ask your own question.