I'm using the Paillier cryptosystem in a protocol similar to mental poker. In the beginning of the protocol, each player generates a Paillier public key $(n,g)$.

Later in the protocol, a player may reveal any message encrypted by his public key (by revealing both the message and the randomizer used). The other players can easily verify that this message+randomizer does indeed encrypt to the original ciphertext. However, they might not be assured that this is the unique decryption of that ciphertext.

For this, it is necessary that after generating his public key, each player proves that this is a correct Paillier public key (ie. that $\gcd(\text{L}(g^\lambda \!\!\!\mod n^2), n) = 1$, or any equivalent statement).

The only way I can think of is the following:

However, the probability of cheating only decreases linearly ($1/k$) with this scheme (as opposed to exponentially ($1/2^k$) using most ZKIPs), so it is not feasible to achieve a very high security level.

It might also be possible to prove the uniqueness of decryption directly (without proving the correctness of the key), e.g. by the verifier encrypting $k$ random messages, and the prover decrypting them and proving that the result is the same (this can be done in zero-knowledge using the homomorphic property). Unfortunately, I was unable to determine what the probability of unique decryption is with an invalid key, so the security level of such scheme is unknown.

First, the awkwardness of ZKPs and distributed key generation in Paillier is the reason many protocols use exponential Elgamal for protocols like mental poker. It is additively homomorphic but has the drawback on only being able to decrypt a small message space. In your case, since users are opening their encryptions, it seems suitable. The whole protocol could be run under a common key that is shared among the users (in a distributed or threshold manner).

I don't know of a ZKP for well-formed keys in Paillier. This is just an initial thought. In the following Paillier variant (from Encyclopedia of Cryptography and Security): 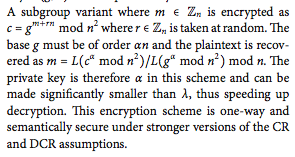 Not the answer you're looking for? Browse other questions tagged zero-knowledge-proofs paillier or ask your own question.

3
Several questions about Paillier cryptosystem
7
Is there a public key semantically secure cryptosystem for which one can prove in zero knowledge the equivalence of two plaintexts?
3
Questions about proof of correct encryption in the Paillier cryptosystem
4
Non-interactive proof that an element is in a subgroup
7
Zero knowledge proof for Paillier addition under multiple keys
3
Schnorr identification protocol security proof
0
Breaking zero knowledge protocol for graph hamiltonicity
0
What does public-coin mean in interactive proof and zero-knowledge?
3
libsnark generator toxic waste