How to implement the Salsa20 hash function?

I am currently implementing Salsa20 from the specification as an exercise in learning and self-flagellation.

I have Sections 1-7 passing the test examples provided. I am now stuck on Section 8, The Salsa20 hash function (Page 6): 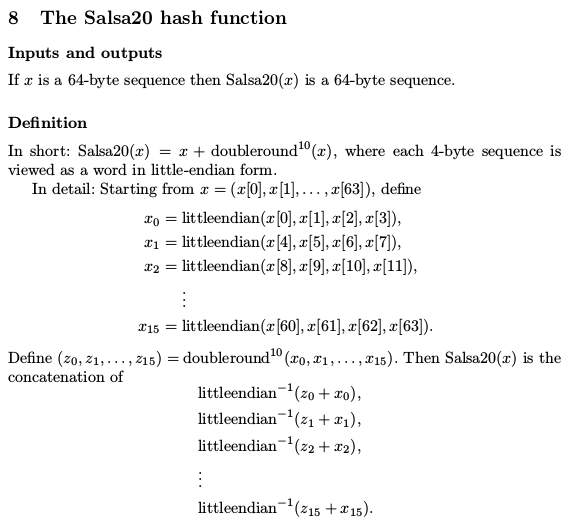 3) To produce the final output, do I concatenate the 16 words (4 bytes per word) from the littleendian$^-$$^1$ function together, then convert them to bytes to get the resulting 64-byte sequence?

Perhaps some psuedo code would answer these questions more succinctly.

You are right about the interpretation of the power 10: it's a tenfold iteration. So we apply the function 10 times, starting with $x$, feeding the output as input for the next step. So C-like (I write x for the vector of 16 words $x_0,\ldots,x_{15}$):

Finally, the iteration gives you a vector 16 words, which you add componentwise in the same order with the original input vector. Then you convert them to bytes again, in that same order, and every word in the little-endian fashion described above. (We could also have converted them to bytes first (using the inverse of litleenian) and then done 64 byte additions in order, but this is less efficient, as we then do 64 byte additions instead of 16 word additions).

Not the answer you're looking for? Browse other questions tagged hash implementation stream-cipher encryption salsa20 or ask your own question.

19
Why does PBKDF2 xor the iterations of the hash function together?
3
Building a stream-cipher out of a hash function?
3
Encrypt a message with hash function, shared symmetric key, but no cipher
9
Why does the WhatsApp protocol require elaborate computation when verifying user keys?
0
How can I change the length of PRF output?
2
Encryption based solely on XORing with concatenated hash values
6
Linear Cryptanalysis of hash function
5
Is the seed block in Argon2 (H0) 64-bit or 64-byte?
1
ECRYPT Salsa20 Test Vectors Interpretation
1
ChaCha matrix - tests for original implementation not passing due to bad counter encoding?