What is the importance of adding round key in AES

I know this may not be the place to ask this but I have found it difficult to find an answer to this question. I know the steps of the AES encryption algorithm but I am finding it difficult to understand the concept stage by stage.

How would by not adding the round key at each stage increase the vulnerability in AES encryption?

The round key is derived from the key and adding it is what makes the algorithm a block cipher (AKA: a keyed permutation) rather than just a permutation.

In the image below you can see a typical block cipher. If the round key were not added in any round then the block cipher output would not depend on the key at all and it would be an unkeyed permutation. 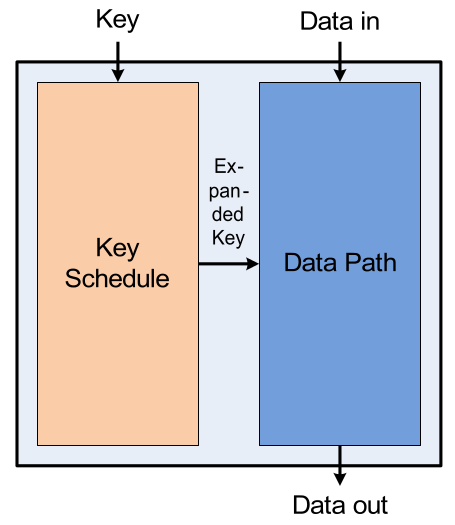 as far as adding the round key each round rather than just at the start and end that's a design choice which improves security. xor-encrypt-xor can be used to easily tweak a block cipher and the basic principle of xor-permute-xor can be used with a strong pseudo-random permutation to construct a block cipher. AES, if round keys were added only at the first and last round, would look something like that.

The key schedule and the round keys added each round are a design choice which positions a lot of messy and difficult operations in such a way that they only have to be computed once for every key. When encrypting a lot of data with a single key, key setup is done once. When brute forcing a key, key setup must be done for every key tried. This translates over to cryptanalysis too.

Not the answer you're looking for? Browse other questions tagged aes or ask your own question.

8
AES 256 Encryption - Is it really easy to decrypt if you have the key?
8
What characters does AES output?
4
What is the Geometric Generalised T' Method?
1
Confused with the role of AES round keys
2
Confused with 128-bits AES round numbers
11
Does changing the order of the steps within a round affect the security of AES?
5
AES reverse Rijndael key schedule with decryption round keys