Is it an example of bilinear pairing?

Can there be other bilinear map defined over $\mathbb{Z}_n$?

Actually all my question were to understand Groth-Sahai proof system. Here, they have recast the general equation to fit the form of a quadratic equation. (See teh highlighted part below). But, how can they remark that all maps with $f(x,y) = xy$ mod $n$ will satisfy properties of bilinear pairing? 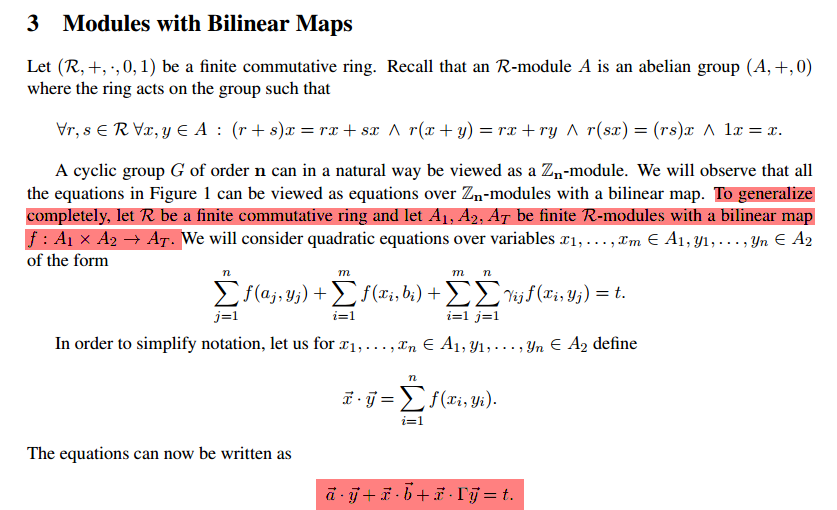 Not only is $\mathbb G_1 = \mathbb G_2 = \mathbb G_T = \mathbb Z_p$ with $e(x,y) = x \cdot y \pmod{p}$ an example of a "bilinear group" (a triple of groups with a bilinear map) but every bilinear group of prime order is isomorphic to one of this form. So anything you want to know in principle about such groups, you can calculate on this example. I've used it myself before now as a sanity-check for some protocols.

The security of e.g. ECC implementations of bilinear groups rests on the fact that the isomorphisms to the $\mathbb Z_p$ form are not (thought to be) efficiently computable.

Of course it's cryptographically useless --- discrete logs are easy, as commenters have pointed out. But cryptographic definitions usually come in two parts, functionality and security. An encryption scheme for example is a triple (KeyGen, Enc, Dec) with a correctness property; the scheme where Enc and Dec are the identity maps is therefore an encryption scheme. Only when we introduce security requirements in a second step does this scheme turn out to be lacking. The same goes for $\mathbb Z_p$: it certainly is a "bilinear group" but not a particularly secure one.

EDIT: to answer your last question whether one can define other bilinear maps over $(\mathbb Z_p, +) \times (\mathbb Z_p, +)$: note that $1$ is a generator of $\mathbb Z_p$ so $e(x,y)$ is completely determined for all $x,y$ by $e(1,1)$. If you want a non-degenerate bilinear map, $e(1,1)$ has to be a generator of $\mathbb G_T = \mathbb Z_p$ too, and whichever generator you pick, the structures that you get are isomorphic. If you drop the non-degeneracy requirement, the map that sends everything to $0$ is a different, trivially bilinear one.

Commonly, one uses multiplicative groups. When recall definition of a pairing, it must be bilinear, non degenerate, and easy to compute. Note that the definition of e(x,y)=x.y can be interpreted as a external product. (x.y = y+...+y: n-times) and not as the internal group law.

I agree with Maeher's answer. The first example is a bilinear pairing, but not the second as it's not symmetric. However the first example, can't be used for cryptographic protocol. Given: x $\ne 0\cdots $, m.x, n.x, and s.x, it would be easy to compute (mns).e(x,x). As example we can build other bilinear pairings, by just considering all linear maps u, v and the pairing (x,y) -> u(x).u(y) which satisfy non degeneracy, the computability is obvious. When using multiplicative structure, definition of pairing is still satisfied, but can't be used for cryptography, as BDHP is trivial.

Not the answer you're looking for? Browse other questions tagged pairings or ask your own question.

1
Bilinear pairing arithmetic
3
How is it decided if $G_1$ and $G_2$ are two “additive” or “multiplicative” cyclic groups?
0
Pairing - Is it possible to map two $r$-torsion points to a $r^2$-torsion point?
4
Understanding the groups used in bilinear Ate-pairing
3
What is different between G1×G1→GT and G1×G2→GT in the bilinear pairing?
2
How to have a hash function that maps from a group element to a binary string of a certain size in charm-crypto?