Okay this is how I understood it according to this:

In my slides there is an attack described - the Key Confirmation Attack - which does look like this: 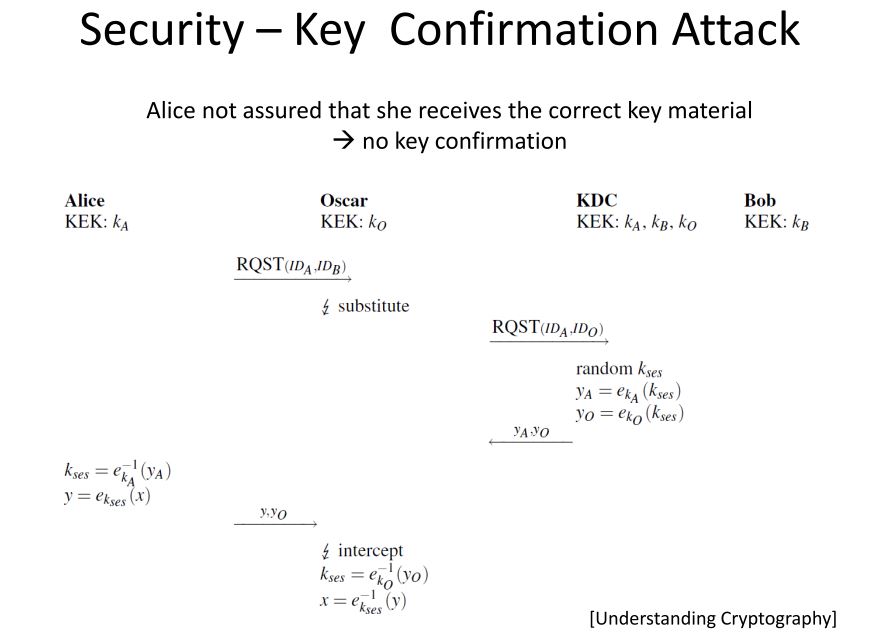 The thing here is now that I am not sure how this is supposed to work. This could only work if $RQST(ID_A, ID_B)$ (I'm sorry for the diverse notation) was not encrypted. This attack cannot work if the request was encrypted by Alice in the first place.

So, are there a few things mixed up or what am I missing?

Oscar cannot produce $k_A(A, O)$ – the requesting message to generate a session key for communication $A$ to $O$ – since he does not have the key of Alice.

Not the answer you're looking for? Browse other questions tagged key-exchange protocol-analysis attack or ask your own question.

3
ECC public key encryption and authentication - ECIES with ECDSA vs ECDH with AES
8
Security of a security protocol for key exchange, using symmetric-key cryptography
1
Attack on a key-exchange,symmetric-key cryptography protocol
2
Attack on Double Encryption Scheme
5
UKS attack on KEA protocol
1
How do two parties put together the AUTH data in the SKEME protocol?
1
Is it Possible to Generate a Duplicate DH Session Key from 2 Pairs of DH Keys?
2
Why is this authenticated Diffie–Hellman key exchange insecure?