Under what conditions did a Bletchley bombe stop?

I am trying to understand the conditions necessary for one of the Bletchley Park bombes to stop. Let me give an example.

I have been experimenting with Enigma machine and bombe simulators to try to understand better how the bombe works.

Using this as a crib, the menu that this produces has three loops (REHTK, EHT, RETK) and a click (loop of the two letters WR), which is pretty good as a crib as this means that the bombe then returns far fewer false stops.

When I plug this crib into the following bombe simulator (where all rings are set to A) I get a collection of about twenty stops, one of which is the correct one.

So my question: what is the condition that stops a bombe that is satisfied with respect to the crib menu?

My understanding is that the back of the bombe is set up to simulate the menu and then the bombe is switched on, stopping through a short circuit when, well, when what?

I tried to use the first false stop that the bombe simulator gave me to understand: 231-YAL. So in particular, my question can be applied to this situation. What is it about this set-up that would stop the bombe with the given crib-menu?

What I did notice in this configuration is that the click is correct with respect to the letters M and T (indicating that there should be plugs WM and RT) BUT the remainder of the loops do not match.

After a year I have managed to find a suitable solution to the problem. My understanding is based on the following picture that I created, based on a simplified version that I found online (at present I cannot find the reference, if I do I will edit it in). 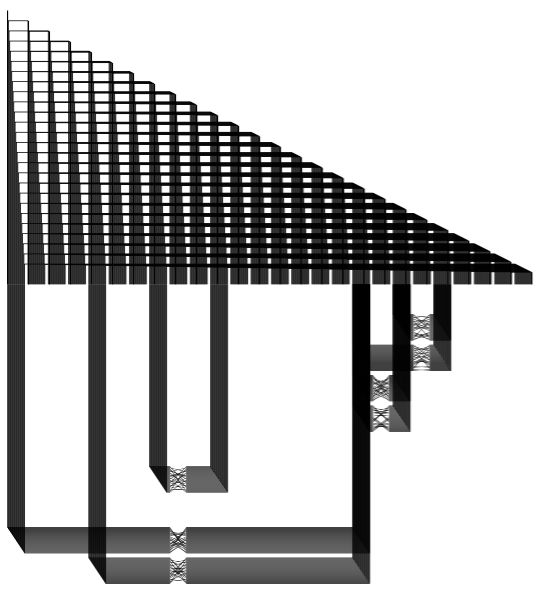 It is supposed to be a bombe and can be understood in two parts.

The idea is that in the real bombe all these lines are wires and a current is introduced arbitrarily somewhere. Then the current flows through the diagram making lines 'live' and others not.

We can test the information above with such a diagram as above. The following diagrams are all close ups of the diagram above (the top right part of the bottom half):

We also learn from this set up the importance of the loops in the crib. This enables a lot of feedback, which is particularly important when the current is sent into the false wire.

Hence to answer my original question: when did the bombe stop? It seems that it should not stop when one column is completely live. And therefore perhaps it stopped when there was at least one non-live wire per column. If your crib had no loops, and therefore no feedback, then this condition would be easily satisfied, and there would be far too many bombe stops to deal with.

Edit after 4 years: I found in the book The Hut Six Story from Gordon Welchman first published in 1982 (although my copy seems to be first published in 1997) Appendix I p241 it says: Thus, in order to detect a "drop", the bombe needs to look for one of only two situations: a case in which current does not get back to any test register terminal other than A, or one in which there is some terminal other than A to which current does not get back.

Not the answer you're looking for? Browse other questions tagged enigma or ask your own question.

1
Engima machine decoding with PC and GPU
2
How exactly is an enigma simulation software supposed to encrypt alphabets?
10
How many possible Enigma machine settings?
1
Secure enigma machine?
4
Why are the indicator drums of a Bombe machine labelled from A to Z clockwise?
3
Enigma machine Encryption steps
1
Is a long Enigma message vulnerable to the index of coincidence?