Would this method deliver a perfectly non-malleable encryption for at least two blocks? [closed]

Disclaimer: the algorithms I present here (and in other messages) are used as a hands-on way to learn about developing crypto algorithms, (and might also be of interest for other curious people), not for practical use (at least not after dozens of iterations and peer-review). I understand some people vote down not just because it seems unproved and speculative, and possibly flawed, but also perhaps because I'm not necessarily presenting it this way. This is just a manner of speech. Most of this *is* probably flawed, but that's the whole point here!

Say I’m using a 128 bit block cipher and would like to encrypt a 256 bit input that would be divided to two blocks, however I wish that every bit changed in the ciphertext would completely corrupt both plaintext blocks when decrypted.

Will this method deliver true non-malleability?

What about an extended version with more than two blocks? - in which during encryption, the additional processing simply goes from the last block backwards, XORs with the subsequent block and stores the result in place (the processing during decryption is also simple, i think). I read though that with PCBC "if two adjacent ciphertext blocks are exchanged, this does not affect the decryption of subsequent blocks." so I'm not sure it would deliver its promise in this case.

Version 2 - two blocks only (reformulated to overcome issues pointed out by @poncho but still flawed - kept for historical reference).

[TODO: consider if this could be extended to more than 2 blocks - the "pre-processing stage" is explained in the remarks of the first version of the algorithm]

NOTE: this still needs some work, it has a serious problem!

Assume an IV of 0, and both plaintext blocks of 0: corrupting on bit of the second ciphertext block would give out a completely psuedorandom second plaintext block, XOR it with the second encryption of the first decrypted block to get the final value of the second, now XORing with the first would yield the exact same value for the two blocks! So right now it does propagate errors backwards, but doesn't deliver true non-malleability. I'll try to see how to fix that tomorrow..

A possible sketch of a solution is to try to a create a dependency for the first block on a psuedorandom permutation of the second one rather than on its plain value. Hopefully that can be done without introducing an additional encryption step. We'll see about that..

Version 3 - two blocks only - (corrects the flaw in the second one, modified in-place to overcome flaws pointed out by @Ricky Demer - might be correct)

Go forward and decrypt all the intermediate blocks with the first key:

Now start at $n$ and go backwards to derive the plaintext blocks:

Note: This is vulnerable to block-exchanging attacks, since during decryption the intermediate blocks are XORed before encryption, and the XOR operation is commutative. I'm considering different solutions:

Version 4: (A new approach, completely reformulated to prevent block exchange attacks. In development - might be flawed at its current state)

Note: for convenience, the IV is considered to be the 0th intermediate block, i.e. $I_0 = IV$

For the final plaintext block $P_n$:

The approach here is a bit more subtle. The outer encryption XORs the current intermediate block with the encryption of the previous one. This means that during the forward iterating part of the decryption process, the first corrupted ciphertext block would actually render the underlying intermediate block malleable, since changing one bit of its corresponding ciphertext block would only change one bit of it. The next ones would be randomly corrupted though, since they depend on an encryption of the previous ones. This is not a real issue though, since during the backwards stage it would be corrupted again, this time randomly since the next plaintext block would not be the expected one.

(There are currently some minor issues with the similarity of the inner and outer encryption, especially for the cases where the plaintext is 0. I'm looking for ways to get around that [without using two different keys]. The current solution is to XOR the inner encryption arguments with the constant value $E(I_0)$ as a secret random constant (per IV) to avoid situations where both the inner and outer will yield the same result and cancel each other - this doesn't require an additional encryption operation since it is needed anyway by the outer encryption. I'm also considering adding a counter if that would prove necessary)

The following diagram describes the encryption process (For $n=3$. The two layers have been separated for clarity, but it should be understood that the whole process occurs in one forward pass): 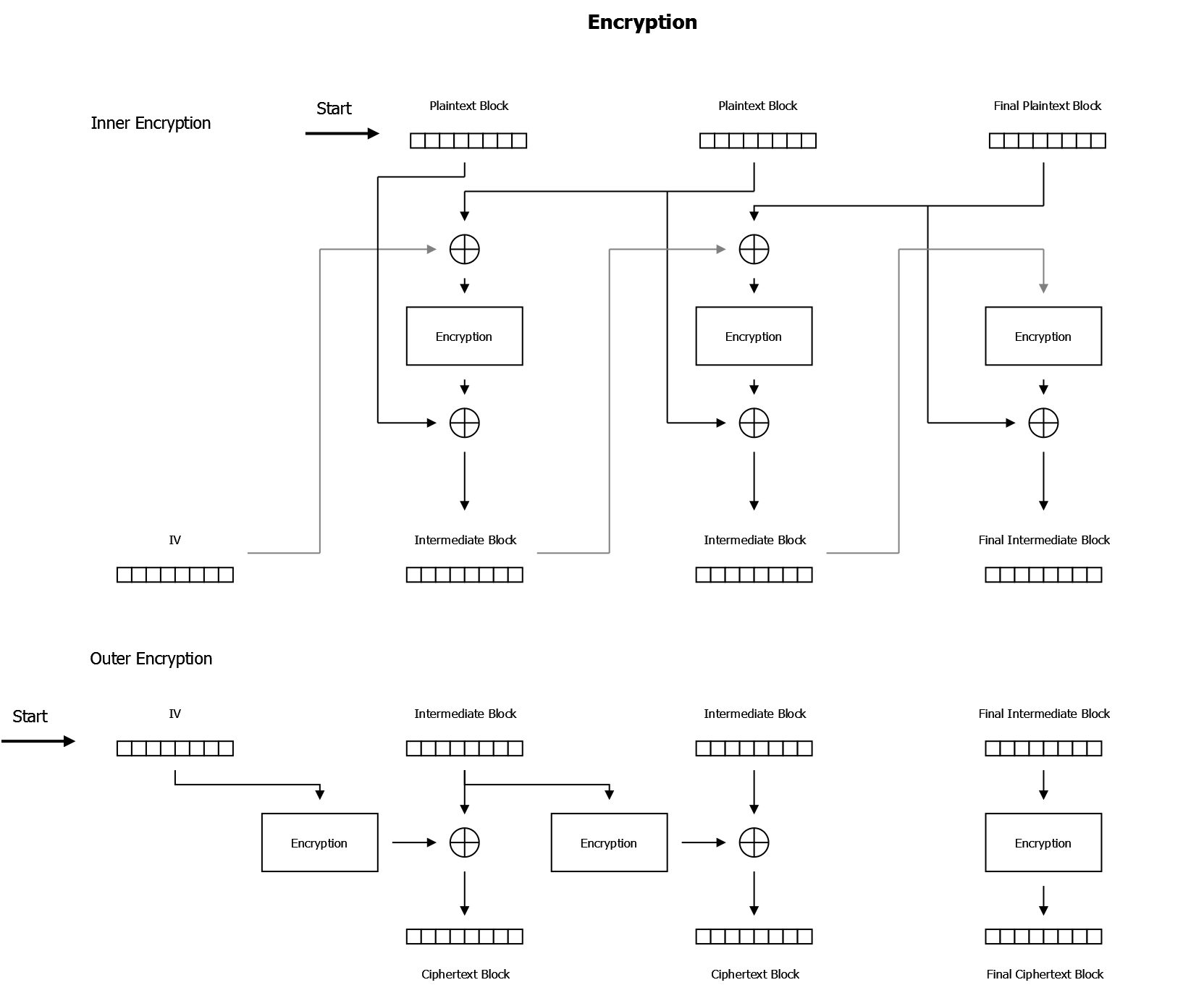 This one describes the two-stage decryption process (also for $n=3$). 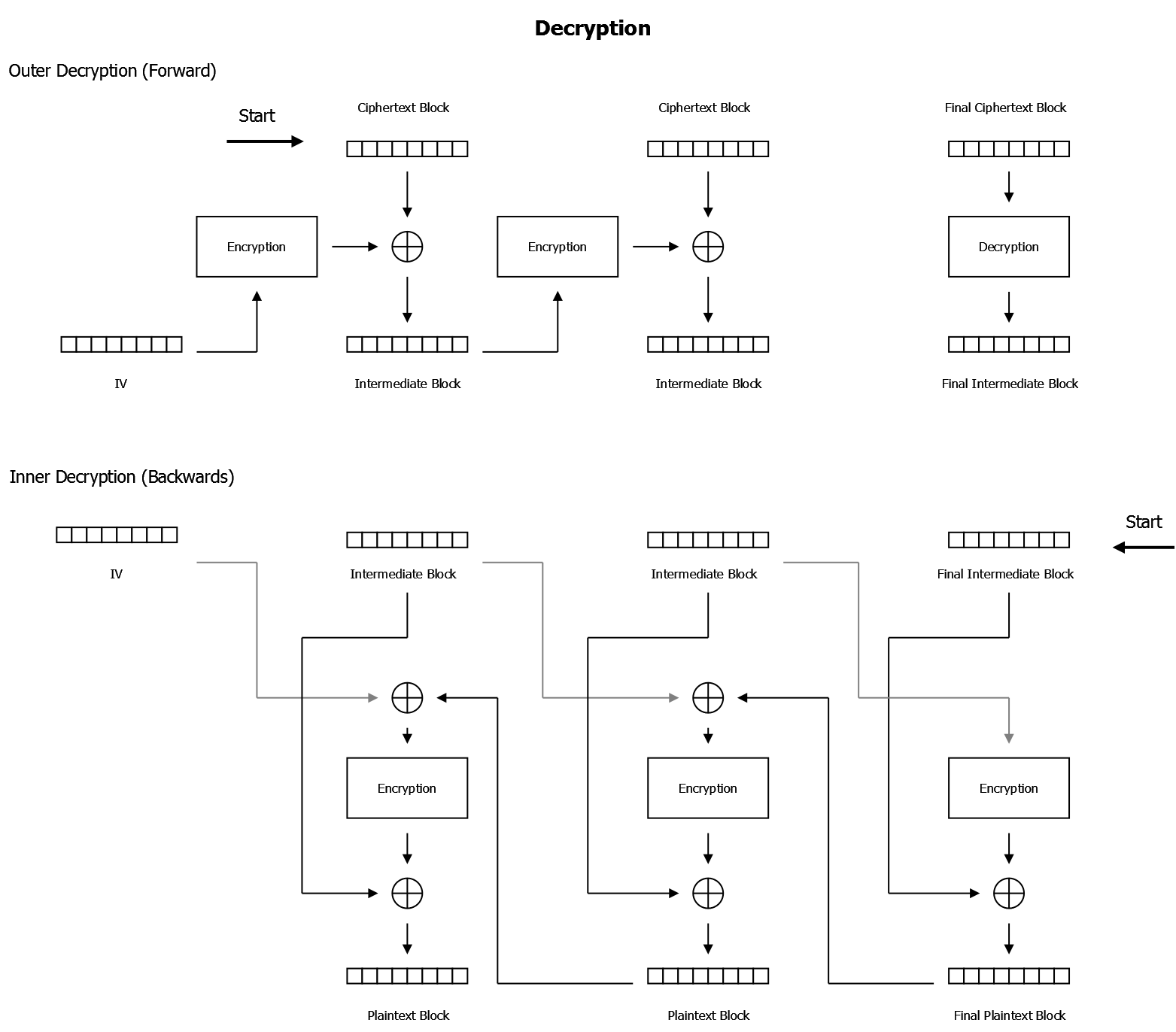 NOTE: this is a work in progress, and might contain severe or careless mistakes.. It is very preliminary and there is still much to analyze - the scrutiny of the community is needed and strongly appreciated.

In case this algorithm does, at some point, evolve to a correct algorithm (though in the special case of $n \le 2$ it might already be at its current state), it would be published under CC-BY.

Will this method deliver true non-malleability?

No. If we set the ciphertext to the value $(B, B)$, then the decrypted plaintext will have the second block as $B$ (assuming that the PCBC mode uses an implicit plaintext/ciphertext IV of 0; if it's two known constants, it's easy to adjust for that).

Let $H(m)$ be any strong hash function. Since you want to use encryption only, we'll specify that $H(m)$ = $E_{key}(m)$ where $E$ is a 128-bit block cipher. We're trying to create an encryption mode that will cause any change to the ciphertext to propagate over all blocks of the plaintext.

$n$ is the number of blocks in the message.

Alternatively, if you set $I_0$ to a constant, or a hash of the entire message, do the rest of the processing normally, then $C_0$ will function as a MAC (verify $I_0$ is the correct value).

If using that form, you can still get semantic security by appending a nonce to the message (perhaps the last 64 bits of the last block, with any padding occurring before the nonce to avoid a padding attack).

When using $H = E_{key}$, the first pass is using the cipher in CFB mode. Since both passes are keyed, not just hashes, you should be able to skip the third encryption.

An alternative solution using one encryption, one cryptographic hash and one (possibly fast) non-cryptographic pseudorandom number generator operation per block.

For this to work some properties of the RNG should be ensured (in general, at least these are what I can think of right now):

A nice property of this is that if a MAC is calculated anyway on the chiphertext, this could be used as a relatively cheap addition to make the message non-malleable as well. I'm not sure how much benefit this would give in practice if a MAC is already transmitted with the message, but it's interesting to know it can be done relatively cheaply (if this proves to be secure of course).

An attempt at improvement of the previous algorithm to use only one encryption and one non-crypto RNG operation (i.e. without a hash function):

This was hastily written so I hope this is correct and secure (if not it may be possible to fix it without making it significantly slower), but still need to look into it (haven't deeply considered block exchange attacks, for example). If it is correct it may be faster than my original solution.

Another thing: a nice property of non-malleable encryption, is of course, it can easily be used to create a MAC - just set the last plaintext block to an expected value such as a zero block or some other constant (probably not zeroes in this case as it wouldn't be a good seed to the RNG, perhaps using the key would be an interesting alternative), so this might be a cheap, fast way to both render the massage non-malleable and add a MAC to it (of course, assuming it's correct and secure).

Note: if this works then the type of encryption mode used here could be used a general, fast way to both encrypt and MAC and the same time (?!!) - without the RNG, i mean?. That seems unreasonable.. I guess I have to analyze this further to verify it's not flawed in some way..

Update: I posted a separate question to try to evaluate and scrutinize this method of authenticated encryption, independently of the way it's being used here to achieve non-malleability.

Not the answer you're looking for? Browse other questions tagged block-cipher malleability or ask your own question.