Why is a Feistel network bijective?

EDIT: Fixed for clarity of intention

I was reading "The FFX Mode of Operation for Format-Preserving Encryption" when I came across Figure 1 (see below). It's obvious why it's reversible (top-down then down-top) but it's not clear why it should strictly be bijective instead of not-injective or not-surjective? What rules out the possibilities of collisions or skips that make it strictly one-one in both directions?

For example: The round function (Fk) can be block cipher or hash based and we pick a subset of output bits into the next round. A collision at say, Fk(n,T,0), in round zero would then map two inputs at the top to a single input at the bottom. Why is that not an issue? Sorry if I'm missing something but it's been a long night and have missed my morning coffee. 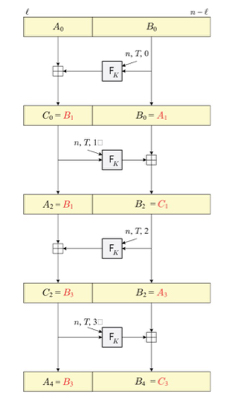 why it should strictly be bijective instead of injective or surjective?

Actually, it is injective and it is surjective; the term bijective just means that it satisfies both the properties of injectivity and surjectivity.

Injective does not mean that there is a 'skip' (that's "not surjective"); instead, it states that no two different inputs give the same output; that is, if $a \ne b$, then $F(a) \ne F(b)$. This follows immediately from the reversibility (invertibility) of the function; if we did have two different inputs that gave the same output, then we couldn't invert the output to get the input.

The above conversation was about functions; now, FFX is a keyed function. What this means is that FFX, with a fixed key, is a bijective function (because it is both injective and surjective).

Not the answer you're looking for? Browse other questions tagged encryption block-cipher feistel-network bijection or ask your own question.