I understand how to implement a Meet-in-the-Middle attack on 2DES/3DES, by computing for one half all possible keys and storing the outcome and then subsequently do the same for the other half but compare with the previously stored outcome to see if there is a match somewhere. Very unprecise description I know but just to state that I know how to do it for 2DES/3DES

The problem is for Feistel ciphers, where it seems that the very same technique cannot be used. Consider the below (sorry for the poor drawing): 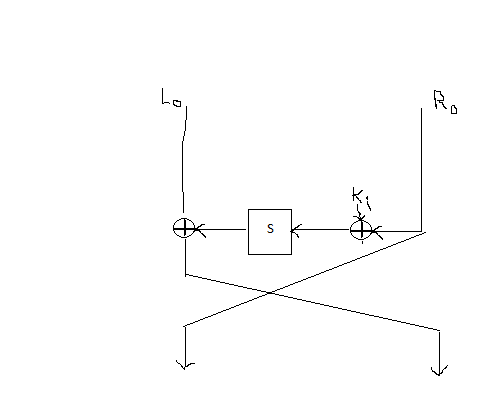 So for a simplified example let's say the Feistel structure above operates on 16-bit blocks and uses 8-bit independant round keys. Each branch block is thus of 8 bits.The S-box is an 8-bit AES S-box.

Given that the adversary knows the following:

So given the two pairs, the aim is to find the key which maps the plaintext to the ciphertext.

Given the assumptions above, how is a Meet-in-the-Middle attack applied here? I've tried to use the same approach as with the 2DES/3DES, but it just doesn't apply in the same way. I'm in need of a bit of guidance on how to proceed.

I can't see where the "middle" value is, and from where I should compute forwards and backwards to reach such a middle value.

Edit: Forgot to mention that there are 4 rounds in the Feistel cipher.

We really only need one plaintext-ciphertext pair, but the second can be used as a way to check candidate keys.

Alternatively, if you have enough storage space, you could build your storage of partially-decrypted-ciphertexts by going through the first two rounds of decryption (which are the reverse of the final two rounds of encryption). In this case, you'd bruteforce all candidates for the final two subkeys instead of just the final one. This requires storing 2^(16 * 2) partially decrypted ciphertexts, but has a speedup of 2^16.

Not the answer you're looking for? Browse other questions tagged encryption block-cipher feistel-network meet-in-the-middle-attack or ask your own question.

7
Is it possible to perform a meet-in-the-middle within a block cipher?

3
Textbook-RSA meet-in-the-middle attack against other RSA based schemes?
7
Meet-in-the-middle with checking complexity
3
Can you help me with this DES variant analysis?
3
Complexity to find an preimage of a hash function
8
Can cycle finding techniques reduce the memory usage of the MitM attack against 2DES and 3DES?
1
DES - encrypt 3 times - DES(DES(DES, k), k'), k) - stronger than 2DES with 2 different keys?
2
Number of cryptographic operations required to perform a MitM for 4DES
0
Symmetric Encryption, meet in the middle attack, effective key length