Is this hypothetical key-exchange secure?

I've thought about the following (generic) key-agreement protocol.
The only weaknesses I could have found are missing freshness guaranteees.

Now for the aims of the protocol:

I know, nothing is secure without a formal proof.

So my question:
Is the above protocol likely to be secure?

By the way: The protocol won't be deployed. This is a question about (general) protocol design.

This is exactly where automatic protocol analysis tools can help you. For example, using the Scyther tool, the protocol description using symmetric encryption is:

If you run this through the Scyther tool, you will find the key is secret, but agreement fails: an attacker can, for example, replace the random value in the first message by anything, causing B never to compute the key, but A still finishes and might think B now agrees on the values. Thus, the protocol does not give you any decent authentication, but the partner is supposedly alive. This is what Scyther shows you: 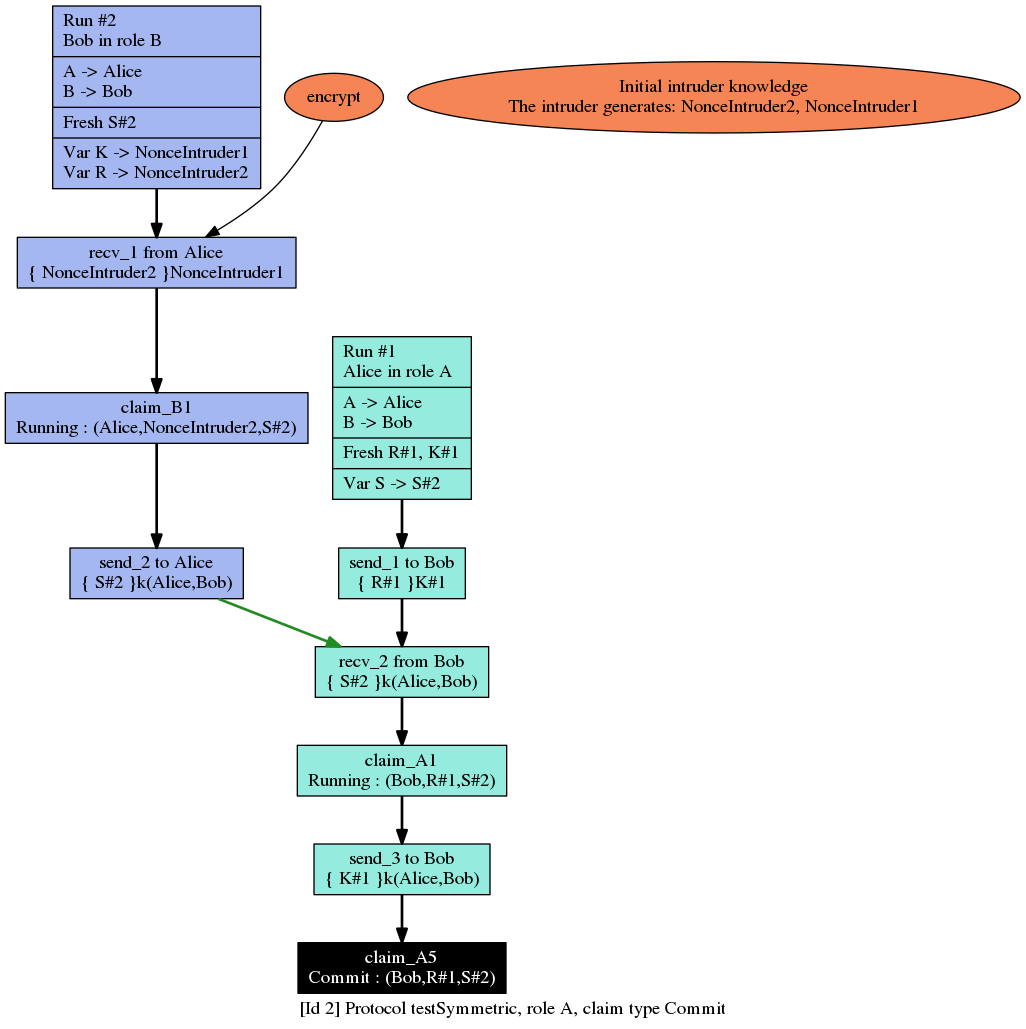 If you modify the message macros for the asymmetric version, i.e.,

then the situation is much worse. Although the key is still secret, even the most basic authentication notion fails: along the lines of the previous attack, the attacker can complete a run with B without A ever being present. A slightly more interesting attack is one on the A role (where the intended partner Bob is never alive):

In this case, the attacker just reroutes the messages and A thinks B is alive but completed the protocol with Charlie.

If you use the compromising adversaries version of Scyther you can also analyse KCI, UKS, and (w)PFS attacks, which will probably yield interesting results.

Not the answer you're looking for? Browse other questions tagged protocol-design key-exchange or ask your own question.

1
Does this chat protocol exist?
6
Forward-secure static-ephemeral ECDH key agreement protocol
4
What is the lightweight key exchange protocol of choice?
5
How to encrypt a symmetric key with a shared secret?
3
From 2-round key-exchange protocol to a public-key encryption scheme CPA-secure
2
How to design a secure challange-response authentication protocol?
1
Post-quantum asymmetric encryption algorithms
1
what motivated the design decisions of RFC 8291 ("Message Encryption for Web Push")?