As a font designer, I was thinking that it would be very easy to design a special font that could either jumble characters of a language (or of a code) or simply (with the features offered by the OTF format) overlap into a complex design that only the other user (the reader) would be able to unscramble... Is this something that exists and could be plausible?

EDIT: To better explain myself, I just created this image. (A) represents a whole sentence. Each circle is a word. (B) details two different kinds of "words" that could exist: wavy, straight lines... but always with 26 peaks (for example an alphabet with 26 letters). When one single letter from a font is typed, just one wave or peak would be drawn until the whole word is typed. (C) is another detail of overlapping of two circles, each one is a word. (D) explains how a word could be read: each circle having 26 peaks, the distance of the peaks from the center tells the reader what letter it is. I made the distance very visible in (D) but it could be extremely subtle / only visible when analysed by microscope/etc.

Such a code could exist on the front page of a newspaper and no one would notice. And it's all encodable in a "simple" OTF font... 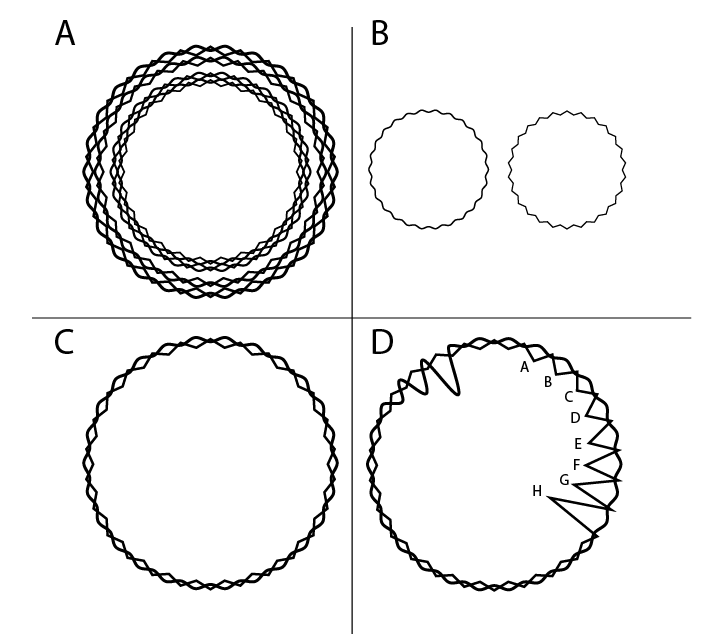 Is this something that exists and could be plausible?

Yes, things like that already exist and have even been used by well-known serial killers!
(So much for creating a dramatic intro – lol)

Nowadays, you won´t find too many examples of it in action, but things looked different hundreds of years ago when a simple substitution cipher was able to baffle the masses. Yet, those days have long gone and suchs ciphers can now mostly be found in children's books on ciphers or “secret writing” gimicks packed in breakfast cereal boxes.

The rare exceptions to this rule are limited to things like (for example) the notes from the “Zodiac Killer”. But – all in all – the enigmatic charisma of “danger” and “death” provided more mystery to those notes than the usage of symbols… something which can be broken/deciphered rather easily, assuming enough data or information is available.

For better understanding: in modern times (and on this site), we tend to handle cryptography according to well-vetted rules… among them some which go back to Kerckhoffs' principles, which defines that a cipher algorithm should be made public (aka: regarded to be known by “the enemy”).

One of the reasons why some notes by the Zodiac Killer haven´t been deciphered yet, lies exactly in that area: the algorithm was never published and the data provided by the Zodiac killer did not provide enough information to deduct the actual contents of the ciphertext with absolute confidence.

Now, please don´t get me wrong. As someone who has professionally designed some fonts for advertising and other purposes, I am always intrigued by the idea of putting some visuals in communication. But I can´t help to share my two cents to spare you from walking the wrong path unwillingly:

I surely agree with you that one can hide a secret in the open. But as soon as someone knows there´s a secret to look for, security starts to fade towards zero. That´s where you need a secure cipher, and – whether we like it or not – fonts can not replace cryptographically secure algorithms.

If you want to take a look around at the different fonts and symbols, use your preferred search engine to check on “cryptography symbols“ and co. 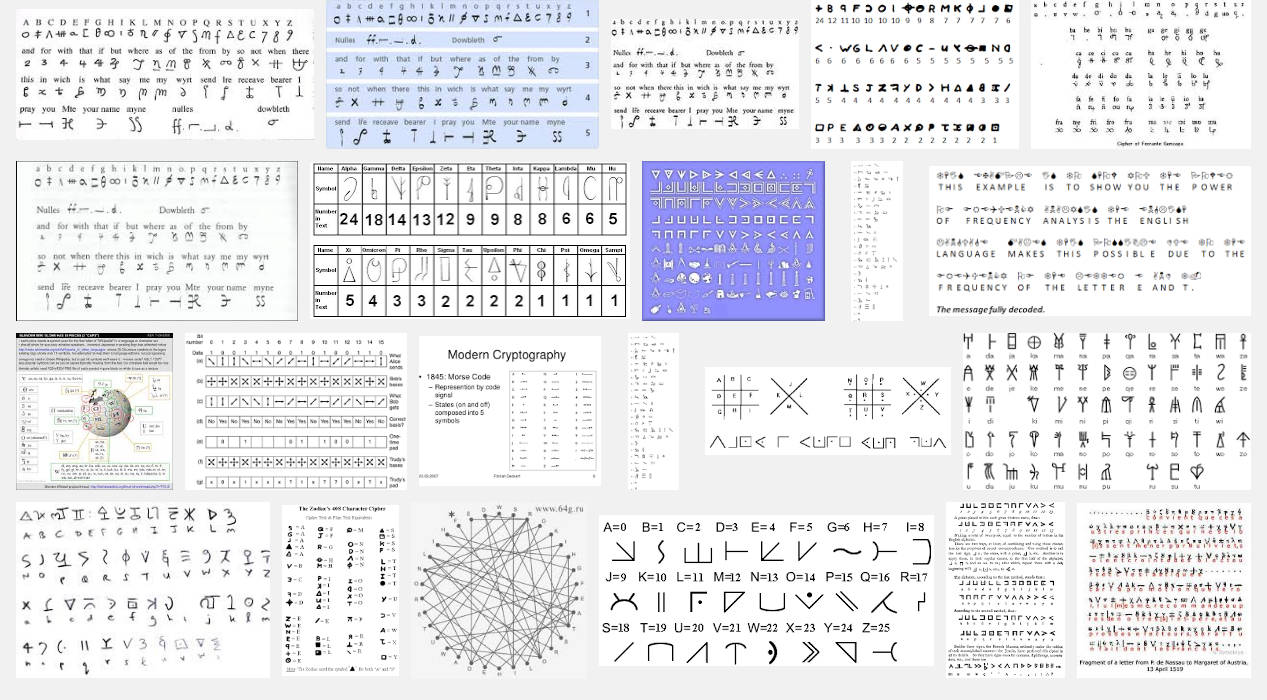 You´ll also discover your idea is already used and published in newspapers as (cryptographic) puzzles. There are even a few pages diving into such graphical ciphers. One of many: http://www.phantomgallery.64g.ru/shiphen/cod6en.htm 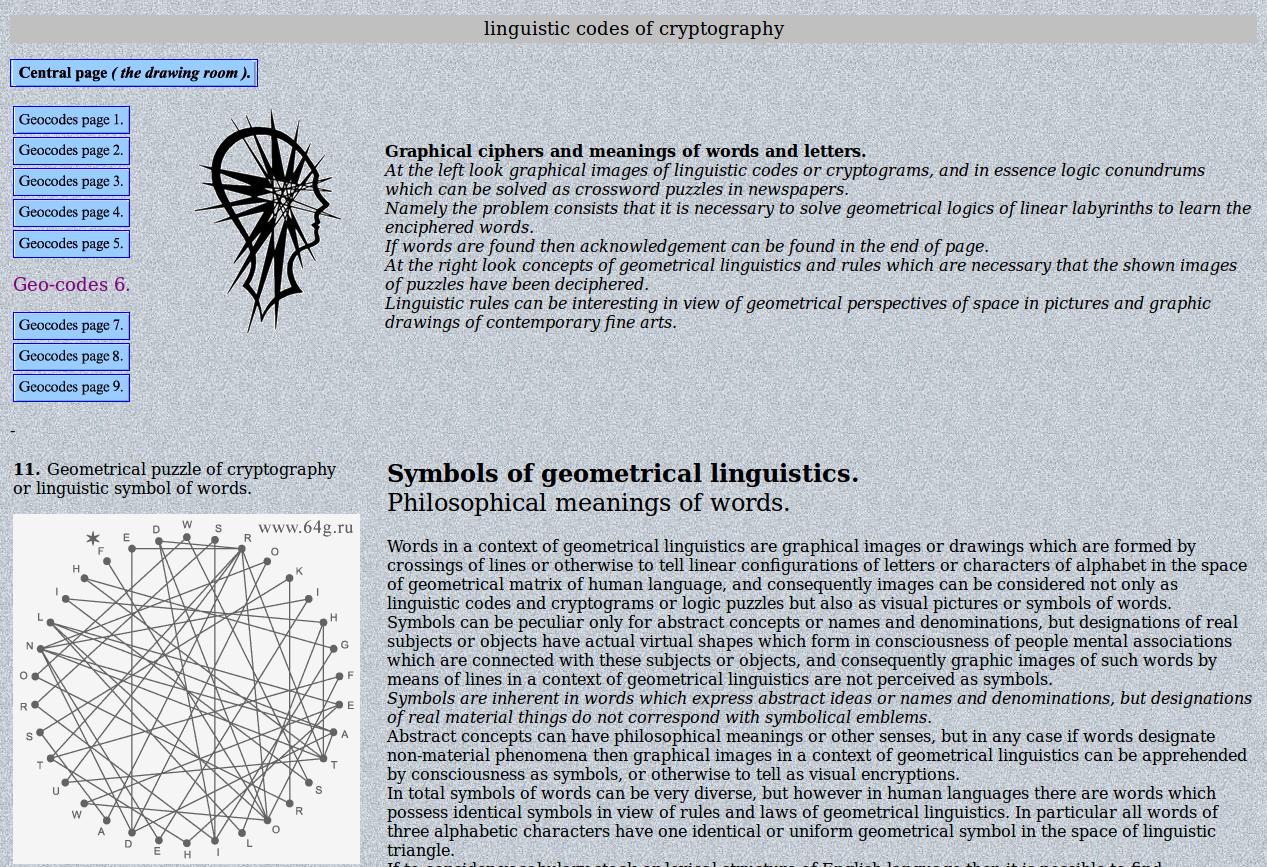 Substitution ciphers of all kinds are easily broken by frequency analysis. And since you are only replacing symbols from one alphabet with those from another, that fits the description of a substitution cipher.

Substitution ciphers exist for over 2000 years, and Al Kindi broke it in the 9th century already.

In order to create something secure today, a good understanding of current cryptography is mandatory.

No, specially designed fonts do not play a (major) part in modern cryptography.

A single level of transposition and substitution is not considered enough to create a modern cipher. You may be able to obfuscate the plaintext, but that's not considered cryptography. You may however be interested in the Playfair and Hill classical ciphers that perform polygraphic substitution. Those are reasonably strong ciphers which you may not want to try to break without a computer.

EDIT 1: You are also talking about stacking characters together if I'm not mistaken. It is possible to do this, but the scheme in itself should not provide security; it should be assumed that you need a key in addition to the scheme. Kerckhoffs's principle has already been mentioned by yyyyyyy. It is unclear if such a scheme can be created without more information, but it seems unlikely that it will handle keys with 128 bits of security.

EDIT 2: If you are just talking about hiding the message in another medium in such a way that it cannot be detected then you are talking about steganography. However in your example you make very strange patterns; many persons will wonder if the pattern encodes something. You could make tiny changes to normal letters instead. These changes would be much less pronounced.

Modern ciphers operate on bits, not characters. Operating on bits makes it possible to create a cipher that can operate on any well defined plaintext.

As the others answered, this of course is not a good idea. However, something similar which can be done properly is called "visual cryptography". This was introduced by Moni Naor and Adi Shamir at Eurocrypt 1994. This has its own Wikipedia entry, so I'll leave it for you to go there and start investigating.

Not the answer you're looking for? Browse other questions tagged encryption reference-request implementation substitution-cipher encoding or ask your own question.

49
Kerckhoffs’ principles – Why should I make my cipher public?
7
Alphabetic Substitution with Symbols
-1
Is there a cipher related to colors and letters?

2
How do I demonstrate that a PRNG not designed for cryptography is not suitable for generating passwords?
0
What are some different cryptography methods?
5
In ECDSA, how many field operations are used for signature verification?
0
Are hash functions "intentionally" designed to be efficient?
2
An unbreakable book cipher?
14
Why are finite groups used in cryptography?
1
What are the algorithms used in Facebook's Diem algorithm?