Both crypto.SE and security.SE have excellent Q&As about how TLS generates session keys (I have linked some at the bottom).

In reading these threads I'm having troubles with terminology since the following terms seem to be used with overlapping contexts, though they are clearly different concepts. Reading definitions is only partially helpful since they don't show the differences between their usages.

As I understand it, the pre-master secret is related to private keys, but is algorithm independent, and the master secret is (often?) used as the session key. But I'm sure there's more nuance to the definitions. 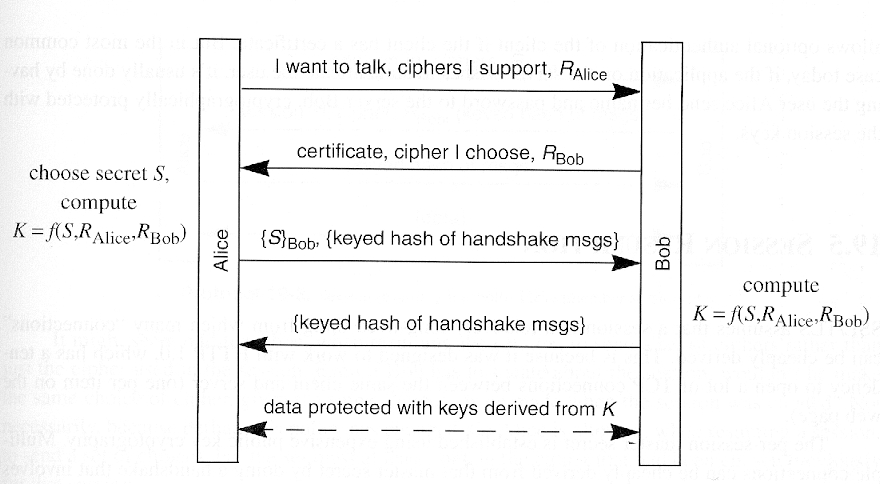 Simplified SSLv3/TLS from this book Note, $R_{(Alice|Bob)}$ is a random nonce chosen by Alice or Bob respectively, and $\{S\}_{Bob}$ is encryption with Bob's public key.

As stated in one of the answer you link to, "The point of a premaster secret is to provide greater consistency between TLS cipher suites."

In the figure above, the premaster secret is $S$ (in message 3). In this case, it is randomly generated. It could come from a diffie-hellman exchange, or some other method, depending on the agreed upon cipher suite.

It isn't really "related to the private keys" but how it is generated/agreed upon depends on the cipher suite chosen in the second message of the figure.

In the figure above, the master secret is $K$. Shown on the sides, it is a function of the pre-master secret and the two random values sent in the first two messages.

This is what is referred to in the last step of the figure. The session key is referred to as "keys derived from K". Many keys are actually derived from K. This could be the encryption key, integrity protection keys (for say HMAC), IVs for the ciphers, etc. And, it is usually a different set for each direction.

When a TLS/SSL session starts(after the hellos and cipher decisions) the server gives the client it's cert. The key in the cert could perform different actions depending on the key-agreement algorithm decided on by the client and server.

Let's say they agree on RSA key agreement. This means the cert contains the server public RSA key and the server has a private RSA key used for decryption, hence private key. The client generates a random sequence called the pre-master secret. The client uses the public RSA key on the cert to encrypt the PMS. The server decrypts the message and gets the PMS. The server and client then perform some random mixing on the PMS, could be a KDF. That Master secret is used to derive keys for symmetric encryption and MAC.

Another option is the server and client could perform Diffie-Hellman key exchange in which the client must also generate a public-private DH pair used to exchange AND generate(due to the way DH works the client doesn't choose the PMS) the PMS. The MS is derived as above. A more modern approach is to use session keys in which the server cert contains it's public key for verifying a signature algorithm(RSA-SHA, ECDSA) that it used to sign either an RSA or DHE (the E means one-time use keys or session keys) public key for key-agreement. Thus the server is not reusing it's key-agreement public key. This provides perfect forward secrecy . In which finding the PriK (Long-lived key) of the signature algorithm the server uses to sign its keys does not make all the session keys vulnerable. In addition finding a session key should allow you to obtain information that would allow you to decrypt traffic that used another session key(The PMS could also be considered a "session key") You could look up a PKI to understand more about how a cert verification works which I did not explain. This is where the client makes sure the cert is valid.

Not the answer you're looking for? Browse other questions tagged keys tls key-exchange terminology or ask your own question.

4
What's the difference between the long term key and the session keys?
9
What is the purpose of pre master secret in SSL/TLS?
3
Establishing encryption key using shared secret
5
How to encrypt a symmetric key with a shared secret?
4
How is session key generated for TLS?
1
What is a pre-shared key in TLS/SSL and why does master key is not used instead of session key?
1
Are there any attacks on the key exchange when the client and the server are using the same private key?
4
TLS Handshake with DH