How secure is this modified Bazeries Cylinder?

This device is a modification of the Bazeries cylinder, it has two stacks of 5 rotors which each bear two alphabets plus numbers 0-9, one in correct order and one in random order ( 36 characters in each row ). Plain text in 5 letter groups is entered by setting the rotors as in Fig 3. The shaded character on the bottom rotor is read and the whole rotor stack is then turned ( keeping the individual rotors in alignment ) so that this character appears on the top rotor. The enciphered group is then read from top to bottom as in Fig. 4. This group is then re-enciphered by the same procedure using the lower stack of 5 rotors, producing a doubly-encrypted code message.( Figs. 5 & 6 ) 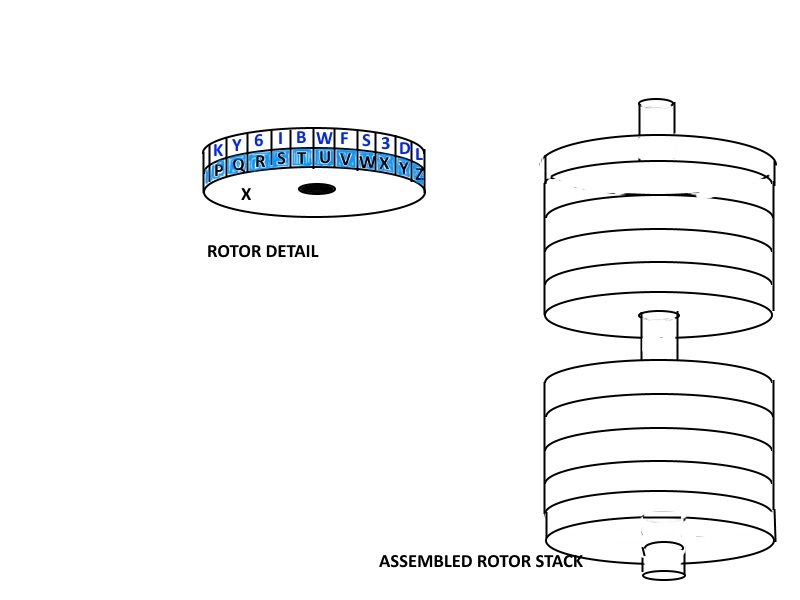 Obviously this would be devilishly difficult to decipher without knowing the rotor stack sequence and the random sequences of the alphabets on each rotor. Frequency analysis, Kasiski tests and Index of Coincidence tests do not reveal any useful information. My question is, could this coding system be broken by other than brute force methods ( which would be very tedious and expensive ) ?

To maintain security, the rotor stack sequence would be changed in accordance with a code book list ( or other protocol ) after every 50 groups.

A specimen of code produced with this device follows :

How secure is this modified Bazeries Cylinder?

That depends on what you expect us to compare it to. I doubt you’re looking for an answer along the lines of “it’s more secure than Scytale, but less secure than AES”. Therefore, I will try to narrow it down a bit by saying that it is safe to assume it can not – in any way – provide the same security levels that modern cryptographic algorithms are able to provide. Some attacks are obvious; while others are merely a question of investing some time and effort to practically cryptanalyze the nitbits.

My question is, could this coding system be broken by other than brute force methods ( which would be very tedious and expensive ) ?

Don’t get me wrong. It’s a nice design and it surely baffled some adversaries back in the days. Yet, in a (let’s just call it) “near-quantum” world, the cryptographic attractiveness of this classical-cipher is nothing more than dust in the wind… a distant reminder of days where things like computers did not exist and security was easier to achieve and uphold.

Not the answer you're looking for? Browse other questions tagged cryptanalysis classical-cipher or ask your own question.

4
security of Felix cipher
0
How secure would this code be against cryptanalysis?
2
Breaking a Modified Caesar Cipher
1
Would this be considered secure?
0
Is this problem still as hard as discrete logarithm (modified ElGamal)?
2
Shift cypher, perfectly secure?