Please, could someone explain to me how the Key feedback mode (KFB) mode works and what the IV in output block stands for? And what properties does the "constant input" has to provide? Should it be random / unpredictable / fixed ?

Then it's encrypted with $K$ which is previous output and then it's xored with the plaintext. So the IV is there to encrypt the first block I suppose. Is that its function?

The KFB mode of operation graphic from Wikipedia: 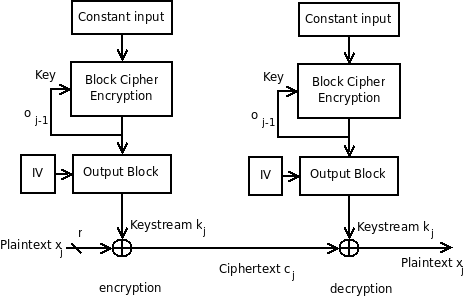 Section 2.4.1 of the KFB specs (NIST) isn’t really any help either: 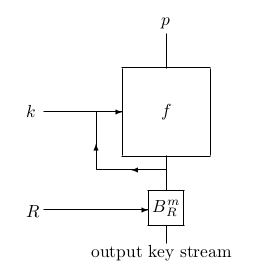 The output of the block cipher is used as the new key, and also passed to the "output block" function, which is referenced in the NIST document as $B^m_R$.

The purpose of the IV $R$ and the function $B^m_R$ is to reduce the output to a smaller size in a manner that hides the true output of $f$. Too large an output allows key recovery.

An example of this uses the following:

$R$ would be an $8 \times 128$ matrix and require 128 bytes to build, and when multiplied against the 128-bit output of AES, would result in 8 bits of data (1 byte) for the keystream. $R$ must be unique to each message, and must be random and non-zero, but does not need to be secret. It can be built using a smaller amount of bits using appropriate methods (such as HKDF), as long as at least $n$ bits are used to generate it.

The constant input $p$ does not have any special requirement and is generally some constant, possibly even all 0 bits.

It is obvious that with a small output and the need to perform the key schedule for every iteration, the efficiency of KFB is very low, and thus it is generally not used for practical applications, despite the provable security bounds.

I assume a partial key feedback mode could be made using AES-256 with 128 of the key bits fixed, and the rest fed back from the output, or using some kind of shift mechanism.

Not the answer you're looking for? Browse other questions tagged encryption modes-of-operation initialization-vector or ask your own question.

10
Is there any reason not to use Single-Key EM with AES and a constant key?

11
Does AES-CTR require an IV for any purpose other than distinguishing identical inputs?
22
(Why) should I avoid using a randomized IV for CTR mode?
88
What is the difference between CBC and GCM mode?
9
Cipher Feedback Mode
3
Is MCrypt's 8-bit OFB mode secure?
5
Parallelization of CFB mode encryption and decryption
6
A block cipher whose key changes after each block
8
Is CBC mode with a fixed IV secure, if a counter is prepended to the plaintext?
0
Cipher feedback mode with shift registrers
3
Block Cipher Mode of Operations