On forums I read DES has $2^{56}$ possible keys so it takes x times to brute force it with hardware x. But there are 64 total bits of which are 8 parity bits. But those parity bits are a 1 or 0, right? So since you still have to calculate the parity bits and since they aren't always the same bit, doesn't this mean that you have $2^{64}$ possible DES keys?

The parity bits act as error checking. In effect there is only 56 bits being used for entropy. Also This question has already been answered.

Permuted Choice 1 selects 28 bits for C and 28 bits for D from the input 64 bits. The remaining 8 bits are odd byte parity.

The descriptions of permutations in the standard can also be describe in hardware terms, that with a byte wide interface also happens to show the relationship between input bytes, their bits and PC-1: 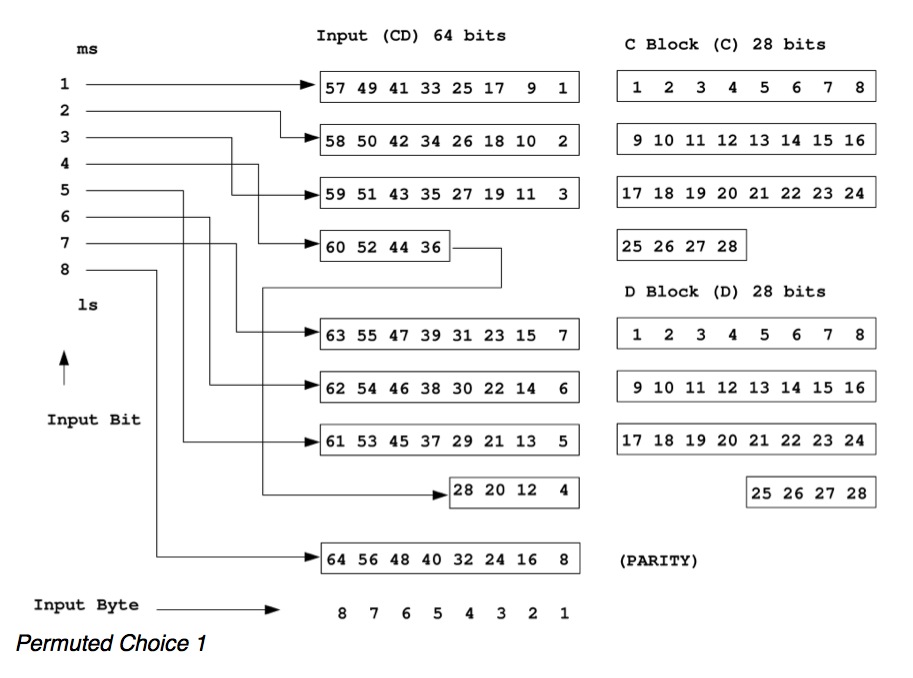 The input bits that do not end up in C or D are odd parity bits. Note the bigendian bits in bytes ordering, the key occupies the most significant seven bits and that the parity bit is the least significant bit.

A key as 16 hexidecimal digits in documents describing a 64 bit block.

A key value of

Represents 56 zero bits and an odd parity bit for each of eight bytes. Those parity bits are not used as key bits.

Not the answer you're looking for? Browse other questions tagged keys des key-size or ask your own question.

3
Triple-DES Brute Force
2
DES Encryption Algorithm all 64 bits for key instead of 56 bits
4
Is there a standard format for compact 56-bit DES keys?
1
Calculating the average key search time of DES
13
Password entropy much lower than entropy of encryption keys. Why is this acceptable?
2
Why can't we give block ciphers larger keys?
2
DES parity bits
9
Proof that no DES key makes encryption identity
1
How many collisions (identical pairs) are possible in meet in the middle attack on double DES with two unique keys?