Doubling the block length of a given block cipher

IMHO the main essence of a Feistel cipher of block length $n$ is the working of a non-linear function $F$ that is applied to the two halves of the block of length $n/2$.

Now suppose a certain block cipher of block length $n$ as well as two keys of it are given. If one employs the given block cipher in the sense of $F$ on each half of a larger block of length $2n$ in parallel (actually invoked alternatingly with the two keys) for a number of rounds, one obtains evidently a new block cipher of Feistel genre having doubled block length and requiring a doubled key length.

Could anything in general be said on the security (or insecurity) of such a scheme?

It may be of interest to also examine the special case where the two keys are identical.

The scheme can be trivially generalized to achieve a block length of the larger cipher of $m \times n$ where $m \geq 2$ operating on $m$ subblocks of length $n$ as follows, with $E(K,P)$ denoting the given block cipher and $K[*]$ denoting the array of the keys:

Note that, in case $m$ is not fixed but the plaintext length is $m \times n$ (and there is one or more keys) one obtains a special kind of block chaining with the given block cipher.

Certainly there is an efficiency issue that needs to be examined for practical applications of the scheme. 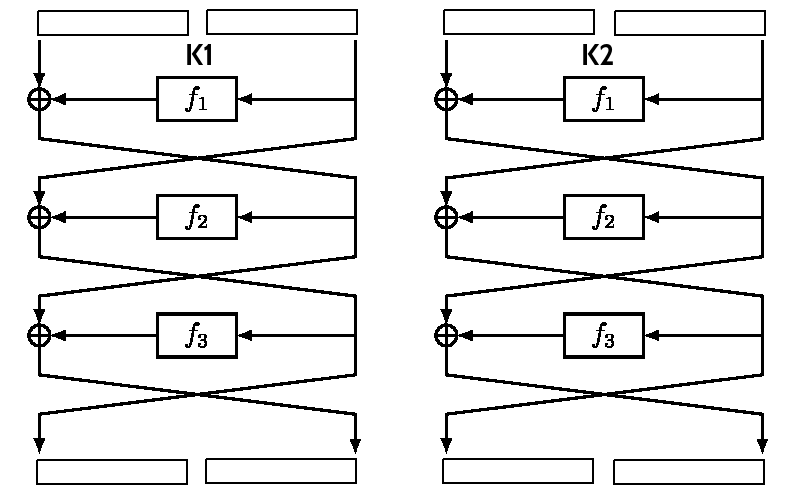 Then my first feeling is that you wouldn't lose that much in security however there are several drawbacks.

However if you meant to use that $n$-block-cipher as $F$ in your Feistel $2n$-block-cipher, then you will have to make a sufficient number of rounds (at least 4 to get full diffusion : see p. 41). Therefore compared to a parallel CTR encryption method just using that $n$-block-cipher, you are 4 times slower and you don't really have a gain in security in term of key as the space is the same.

Your idea is this : given a $n$-bit block cipher, one can construct a $2n$ bit block cipher using a Feistel construction. More over you want to use 2 keys in order to increase the security margin. 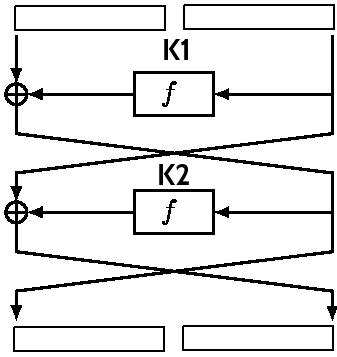 Given enough rounds (at least 4), I can't see any security hole in that construction (but I'm not a cryptographer yet).

This construction can be displayed as such (e.g. with 5 blocks, 2 rounds) 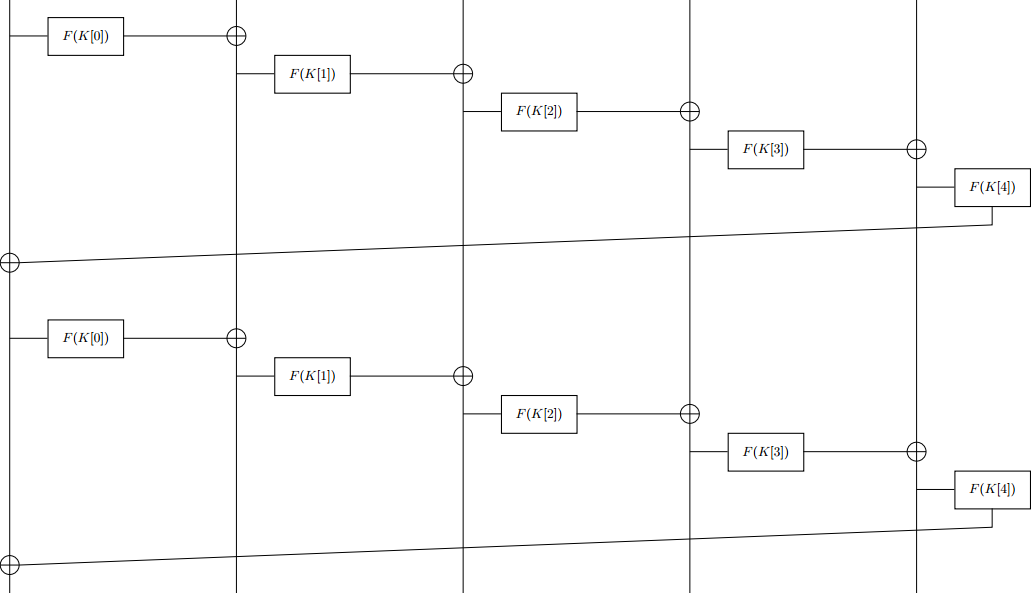 In order to get a full diffusion you need a strict minimum of 2 rounds. However this is the same as using the $n$-cipher as a keyed $S-box$. By the way, the more blocks you add, the closer you are to a SPN.

Not the answer you're looking for? Browse other questions tagged encryption block-cipher feistel-network or ask your own question.

6
Where is the proof of security of Diffie's cipher?
3
Understanding Meet-in-the-Middle attack on block ciphers
0
Block cipher detect padding behaviour
2
What is the difference between substitution cipher and block cipher?
2
How does the round function in this particular Feistel cipher work?
2
Unbalanced numeric Feistel network implementation
1
Block cipher design criteria when specifying key size