What is a branch number in the PAEQ algorithm?

So, the question is what is a branch number and why there are 5 MegaSBoxes, not 2?

In AES, the MixColumns transform as a branch number of 5, this is because a change to a single byte input causes 4 of the output bytes to change. Like branches of a tree, 1+4=5. This is because MixColumns uses an MDS matrix for multiplications against the input.

AESQ operates on entire 128-bit blocks, which are further broken down into AES round operations. 2 AES round operations create full diffusion of the 128-bit block, so a single AESQ round consists of 2 AES rounds, in 4 parallel paths, followed by a shuffle operation so that 4 bytes from every AES round group go to a different group for the next round. What I am callling an AESQ round here is the output of a shuffle to the next shuffled output, I believe they call this 2 rounds in the paper.

Because the 2 AES rounds offer full diffusion, the branching of AESQ is a change 1 AES input block resulting in a change to 4 bytes of each AES output block. I color coded the blocks to show the distribution of modified bytes due to a change in any input byte over a single AESQ round (built from 8 AES rounds). 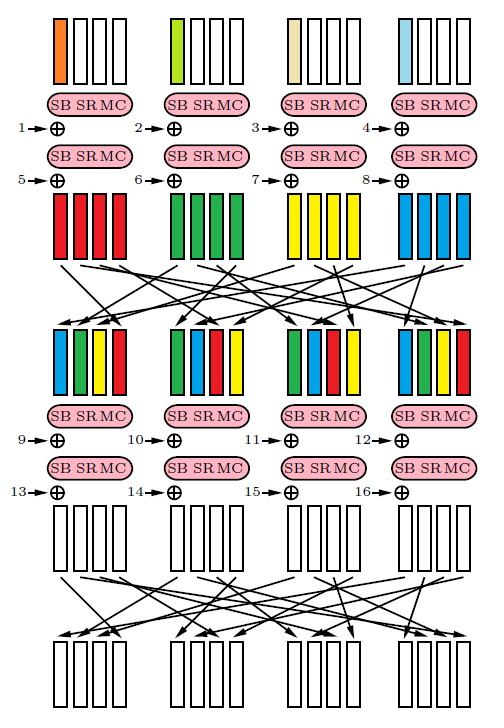 Therefore, just like in AES, we need 2 AESQ rounds for full diffusion of a single bit change to the the 512-input. This involves 16 AES rounds and 2 shuffle operations. This is considered MegaMixColumns plus MegaSubBytes, with a branch number of 5. This is called 4 rounds in the paper.

Not the answer you're looking for? Browse other questions tagged aes authenticated-encryption terminology or ask your own question.

2
What is the meaning of weight in cryptography and how is it related to branch number?

2
Two different approaches for Key Expansion using the AES-256 algorithm?
2
What do associated data and message numbers mean?
5
AES with shuffleBytes instead of shiftRows
10
How to calculate active s-boxes from branch number?
6
How to find the AES branch number?
3
Prove the branch of number of Advanced Encryption Standard
5
Security of the AES with a Secret S-box
2
How to check that an $km \times km$ block-binary matrix is an MDS matrix in $k$-bit words over $\operatorname{GF}(2)$
2
In what paper was OCB2 introduced?