How does the split mask countermeasure work on AES?

I am trying to understand the split mask countermeasure which is a masking method to avoid side channel attacks. Let's first describe the principle and then try to apply it to AES.

I found this paper which analyses this method. First, I will quote the presentation of the split mask countermeasure which is given in the second section:

This means that the input of the S-box is masked with $n$, and each output value is masked with an individual random value $r_x$. This gives the masked table $S'$. The set of output masks $r_x$ is also stored in the mask table $M$ so that \begin{equation} S'(x \oplus n) \oplus M(x \oplus n) = S(x) \oplus m \hspace{1cm}(2) \end{equation} holds for every input $x$. In other words, $m$ can be viewed as the output mask of $S$ that is split into two shares $r_x$ and $M(x \oplus n)$, the splitting being individual for each table entry.

The split mask countermeasure with a single mask table is claimed to thwart the 1-st order DPA attack. For this, the original description requires that $(2)$ should never be computed directly (i.e. appear as an intermediate value) during an algorithm execution.

The description seems clear to me except this sentence:

For this, the original description requires that $(2)$ should never be computed directly (i.e. appear as an intermediate value) during an algorithm execution.

So how should it be computed?

So let's consider we want to encrypt a block data using AES and the split mask countermeasure. We start by generating $n$, $m$ and 256 bytes $r_x$ to compute $S'$ and $M$.

But then, when we have to apply the $\texttt{SubBytes}$ operation during the algorithm, how to proceed?

In the same paper mentioned above it is said:

Other details of concrete implementations can be found in [10, 11, 12, 13]. In these papers the countermeasure is proposed for an optimized AES implementation with $8 \times 32$-bit lookup tables that are used to compute the S-box and the diffusion simultaneously.

but it concerns optimized $32$-bit implementation and I would like to simply implement it for a traditional $8$-bit version so it does not help me that much...

The answer to "So how should it be computed?" is not at all. It is not needed. I think this is just a warning that it would be a problem to have (2) as intermediate value, because $m$ is kept constant for many plaintexts. Strangely enough, the inventors of the split mask countermeasures didn't realize that keeping $n$ constant for many plaintexts poses the same risks. A very short look at the paper you linked to, gave me the impression that it will expose this weakness in later chapters.

I did not paid attention enough when reading the paper. The figure 2 illustrates the operation: 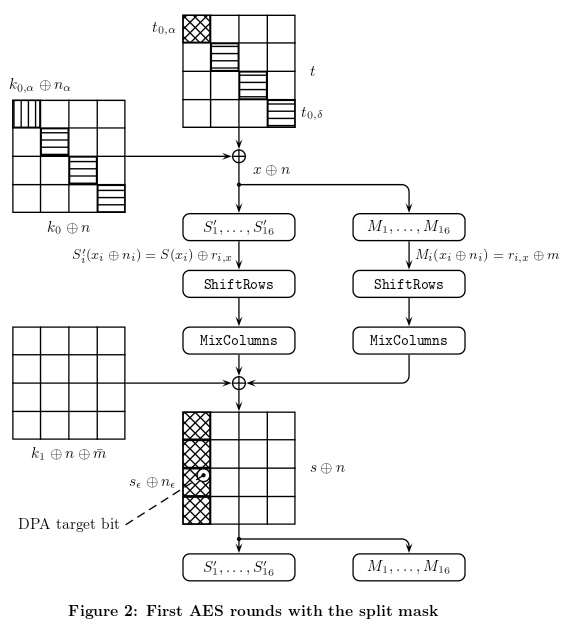 Finally, the last $\texttt{AddRoundKey}$ (so in the last round), is not performed by xoring it with $n$ but still with the transformations undergone by $M$ and $r_x$ (note that it is not $\tilde{r_x}$ and $\tilde{M}$ as defined above because the operation $\texttt{MixColumns}$ is omitted in the last round).

As whoever pointed out in his answer:

Not the answer you're looking for? Browse other questions tagged aes cryptanalysis side-channel-attack dpa or ask your own question.

3
Polynomial representation of the affine part of the AES S-box
8
How exactly does AES-NI work?
0
What makes this mixer function resistant to differential cryptanalysis?
3
How does DPA work on AES?
2
How does constant-time comparison work?
12
Where is the key in white-box AES cryptography?
1
how does AES GCM in SSH work?
6
Does a masked look-up table prevent cache timing attacks?
0
How to generate whitebox AES decryption algorithm and code, with existing WB-AES encryption code?