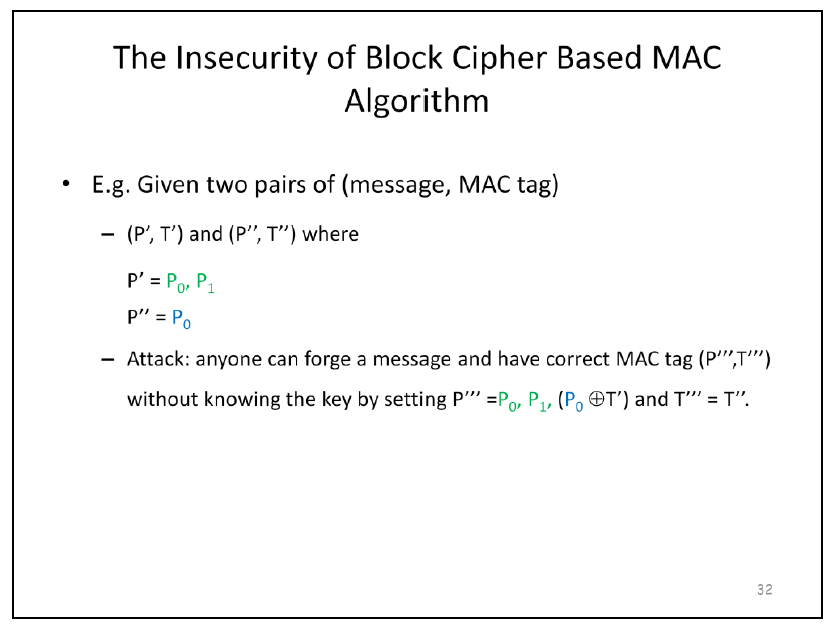 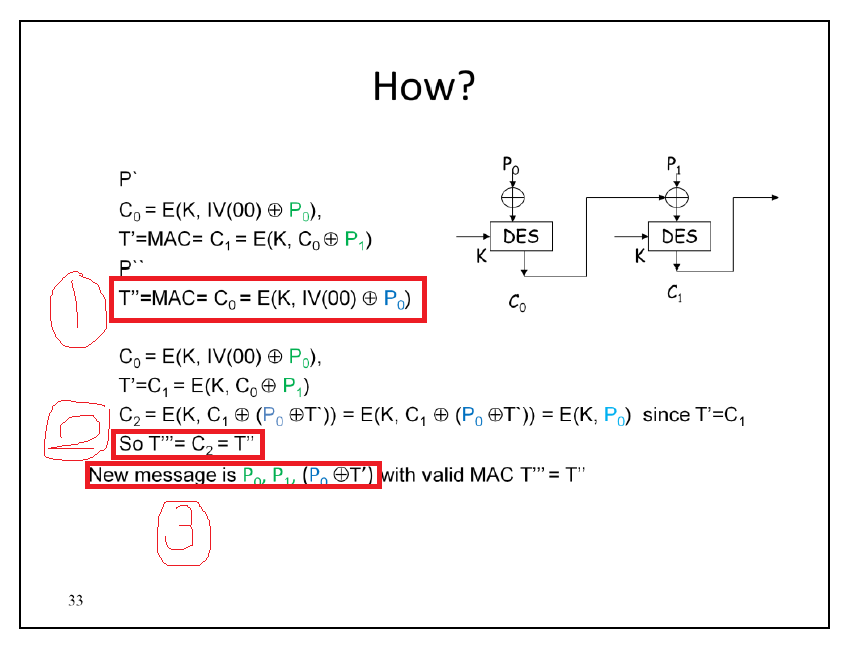 Can anyone explain why CBC-MAC is not secure for variable length message?

I read many books, but there are still some confusion. Such as the highlighted parts in previous pictures

authentication mac cbc-mac
Share
Improve this question
edited May 20 '16 at 13:44

Can anyone explain why CBC-MAC is not secure for variable length message?

For the previous question I'll quote Matthew Green's post from 2013:

A quick reminder. CBC-MAC is very similar to the classic CBC mode for encryption, with a few major differences. First, the Initialization Vector (IV) is a fixed value, usually zero. Second, CBC-MAC only outputs the last block of the ciphertext -- this single value forms the MAC.

Many dumb implementations stop here. And that leads to big problems.

Most notably, if your system allows for variable-length messages -- as it should -- there is a simple attack that allows you to forge new messages. First, get a MAC T on a message M1. Now XOR the tag T into the first block of some arbitrary second message M2, and get a MAC on the modified version of M2.

The resulting tag $T'$ turns out to be a valid MAC for the combined message $(M1 || M2)$. This is a valid forgery, and in some cases can actually be useful.

Actually it is not set. $T''$ is computed as written in the slide and the result is $C_0$.

Not the answer you're looking for? Browse other questions tagged authentication mac cbc-mac or ask your own question.

3
Modifications of CBC-MAC
4
Authenticate a short message with redundant encryption instead of using a MAC?
8
Is the HMAC construction really neccessary for a fixed length message?
1
Few questions about CBC MAC
2
CBC-MAC insecure with random IV
2
Having CBC-MAC of a one block message, forge CBC-MAC of two blocks
2
Why is ECBC-MAC with one key insecure?
0
IND-CCA insecurity of modified CBC encrypt + MAC scheme