How does Feistel cipher create diffusion between blocks? 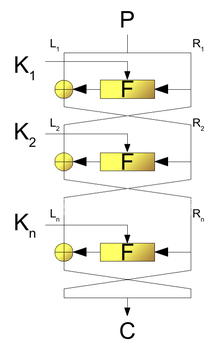 permutation feistel-network blocksize
Share
Improve this question
edited May 20, 2016 at 20:08

If a message is longer than the block length, how would changing one part of the message affect the encryption of other parts of the message?

That really doesn't depend on the block cipher in use, which may be a feistel cipher like DES or a SP network like AES, but on the mode of operation.

Now the answer to this really depends on the actual mode chosen. Note anyways: The encryption process is never message dependent, only the encryption result shows observable differences between the modes.

If L1 and R1 are considered one block, how would they affect the next blocks or the previous blocks of the message?

This is not well-known or -defined usage of feistel networks. However, you either create a larger block cipher this way and thus "moving" the problem of the mode to a higher granularity or you're defining some sort of mode operating on two blocks of data at once, like $C_1||C_2=E_K(P_0,P_1)||E_K(P_1,P_2)$ which would suffer from similar problems as ECB but at a higher granularity level (e.g. you can detect when a pattern of three blocks repeats).

Not the answer you're looking for? Browse other questions tagged permutation feistel-network blocksize or ask your own question.