Why is SHA-1 considered broken?

If the answer is no, then how can SHA-1 be considered broken?

We call a primitive broken, if there is any attack faster than bruteforce/what we expect of an ideal primitive. Broken does not mean that there are practical attacks.

Even when there were no known collisions in SHA-1, we still called collision resistance of SHA-1 broken, because there is a theoretical attack that can find collisions using fewer than $2^{80}$ calls to SHA-1.

In particular an $n$ bit hash function should have at least the following properties:

A function getting broken often only means that we should start migrating to other, stronger functions, and not that there is practical danger yet. Attacks only get stronger, so it's a good idea to consider alternatives once the first cracks begin to appear. 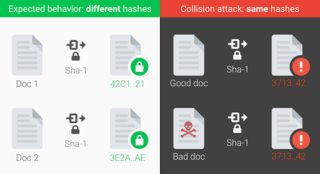 Not the answer you're looking for? Browse other questions tagged hash sha-1 collision-resistance or ask your own question.

1
Vulnerabilities in SHA-1
102
What is the new attack on SHA-1 "SHAttered" and how does it work?
37
Does "Shattered" actually show SHA-1-signed certificates are "unsafe"?
32
HMAC-SHA1 vs HMAC-SHA256
7
Is Base64(SHA1(GUID)) still unique like the original GUID?
7
Is SHA-1 still practically secure under specific scenarios?
13
Is a second preimage attack on MD5 feasible?
0
What's wrong with RSA and OpenSSL?
1
Is RSA with SHA1 broken?
2
How (in)secure is a signature based on DSA with DSS1 (SHA1) in reality?
See more linked questions

7
Is SHA-1 still practically secure under specific scenarios?
0
Explicit Key SHA-1
22
Cycles in SHA-256
11
Why can't they just fix SHA-1 if it's broken?
1
Is a hashing algorithm considered broken if a collision happens under $2^{n/2}$?
4
Is length extension attack considered as collision?
16
In 2020, SHA-1 practically broken in chosen-prefix collision (CP-collision). Can double SHA-1 hashing prevent CP-collision?
1
Security Considerations in using SHA-1 for One Time Passwords