The more I encounter the term "cryptographic primitive," the less I feel confident that I truly understand what it means. Is it just me, or is there no universal definition for the term? Or does the term have some contextual sensitivity that I'm missing?

Some questions that illustrate my confusion:

As others have pointed out in the comments, "cryptographic primitives" are generic building blocks. What exactly this means depends on your point of view and the level of abstraction.

The most basic primitives are those, where a function is considered secure, but either you can't break it down any further or there is no security argument for its individual parts. Examples:

And then there are primitives, which are not specified any further. For example if you assume a public key encryption scheme and just need its generic algorithms (Enc, Dec), then that encryption scheme is your building block. It isn't the underlying trapdoor one-way function, because you don't care which one is actually used.

To answer your questions: 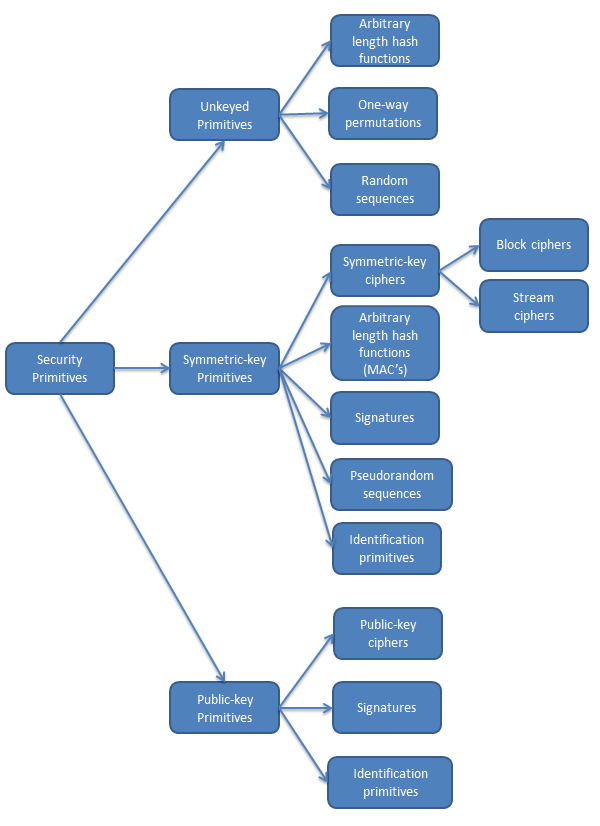 ...the figure provides a schematic listing of the primitives considered and how they relate. ...these primitives should be evaluated with respect to various criteria such as: 1. level of security - is usually difficult to quantify. 2. functionality - primitives will need to be combined to meet various information security objectives. 3. methods of operation - primitives, when applied in various ways and with various inputs, will typically exhibit different characteristics; thus, one primitive could provide very different functionality depending on its mode of operation or usage. 4. performance - this refers to the efficiency of a primitive in a particular mode of operation. (For example, an encryption algorithm may be rated by the number of bits per second it can encrypt). 5. ease of implementation - this refers to the difficulty of realizing the primitive in a practical instantiation. This might include the complexity of implementing the primitive in either a software or hardware environment.

17
Overview of relations between cryptographic primitives?
2
Why is AES encryption decryption not platform agnostic?
3
Differences between algorithms, ciphers, primitives and functionalities
0
What's the difference between block ciphers and symmetric-key encryption?

13
Counter mode secure hash algorithm
7
Abstracting primitives and modes of operation
3
What does “invertibility of the cryptographic primitive” mean?
5
One cipher to rule them all?
3
The Wide Pipe construction
5
Why are theoretical hash constructions based on the hardness of the discrete logarithm problem not really used in practice?
3
Can length extension attacks be avoided by a single bit flip?
2
Is obfuscation considered a cryptographic primitive?