In his book Cryptography, Theory and Practice (3rd edition), Stinson states the equality for $\textbf{Pr}[\textbf{x}=x|\textbf{y}=y]$, which can be seen in the snippet below. 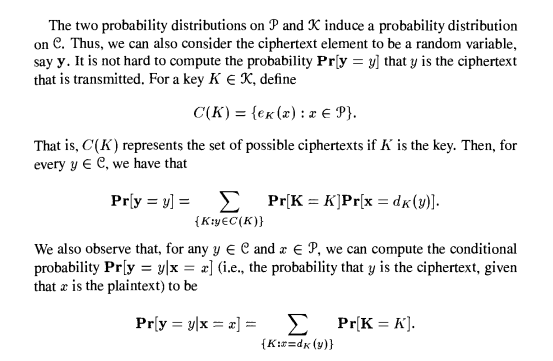 The operation of the function is completely described by $P(X,Y,K)$ which factorizes as $P(Y|X,K)P(X)P(K)$ under the assumption that $X$ and $K$ are independent and leads to

Using the same approach you can prove the conditional statement:

(Here, I've denoted the encryption function with a bold $\b E$ to highlight that, in general, it could be stochastic, whereas the decryption function $D$ must surely be deterministic in any sensible cryptosystem.)

(This assumes that the decryption $D_K(y)$ is defined for all $K$ and $y$; if it's not, we'll need to additionally restrict the sum to only those keys for which it is defined, as the book does. Or we could simply define $D_K(y) = \bot$ whenever the ciphertext $y$ is not decryptable by the key $K$, where $\bot$ represents as arbitrary "error indicator" value such that $\P[\b x = \bot] = 0$.)

BTW, as a slight definitional digression, I'd like to note that defining conditional probability as $\P[A \mid B] = \P[A, B] / \P[B]$ is a bit problematic, because there are many natural situations where one would wish to condition on an event $B$ for which $\P[B] = 0$. (For example, consider the event $\b x = x$, where $\b x$ is a continuous random variable and $x$ is a constant.)

Rephrasing the definition as $\P[A, B] = \P[A \mid B]\cdot \P[B] = \P[B \mid A]\cdot \P[A]$ avoids some of the problems with division by zero, but still leaves us with the fundamental issue that there can be meaningful non-zero conditional and marginal probabilities that cannot be determined from the joint probability distribution of all the relevant variables. The standard mathematical solution to these issues is to instead formally define probabilities via a $\sigma$-algebra of events, but this formalism is rather abstract, not to mention notationally cumbersome.

Also, expressions like $\P[A,B]/\P[B]$ still appear naturally in many calculations involving conditional probabilities, e.g. in showing that $\P[A,B\mid C] = \P[A\mid B,C]\cdot\P[B\mid C]$, and avoiding them can get very awkward. Often, if one does not insist on absolute technical rigor, it's a lot more convenient to simply treat probability ratios like $\P[A,B]/\P[B]$ as formal expressions which, even though they may not always have a well defined numerical value, still satisfy algebraic rules like $\P[X]/\P[Y] \cdot \P[Y] = \P[X]$.

Of course, in crypto, we are rather fortunate in that usually our random variables range over finite (even if possibly very large) sets, and that events occurring with probability $0$ really can usually be considered impossible. But even here, zero-probability events can sometimes sneak in, e.g. when considering something like an infinite sequence of coin flips or, as here, a probability distribution over a set of messages of potentially unbounded length.

Not the answer you're looking for? Browse other questions tagged encryption des probabilistic-encryption or ask your own question.

3
How can I encrypt more than 64 bit with the Data Encryption Standard?
1
How can I handle the situation if key size is less than 64 bits in DES?
1
How can IND-CPA encryption be identity revealing?
1
How can I use the whole potential of DES?
1
How Can I decrypt this VNC Authentication handshake?
8
Should the identity of a sender be verified using additional means, or does a MAC suffice?
2
If a probabilistic encryption algorithm is used, how does decryption return the correct message?
3
How are the PC-1 & PC-2 calculated for the DES block cipher?
1
How can a derived key be verified to be the right key?
1
Is there a way to sign a message so that any subset can be verified?