We want to generate coupon code series and then encrypt those coupon code in numeric only, and that must also be decipherable.

We will be sharing encrypted code as coupon code with customer.

These are the conditions:

We generate coupon code from 1 to 100 (needs in millions and plainCode will be either numeric or alphanumeric doesn't matter).

We want share encrypted numeric coupon code with specific digits to user. i.e. if code is 52 then encrypted code gives us between 10000 to 99999 (if 5 digits are specified or it need to be fix number of digits)

We are also able to decrypt the same.

Is there an established, cryptographical secure way to do this? If not, what would we need to do to handle this?

Any suggestions or ideas are more than welcome.

We have looked and FPE. Any good algo for the same recommended which return in specific number of digits. We have one which gives encrypted numbers less than specified number but we want in between specific range to maintain number of digits without 0 appending.

I have an almost identical requirement for location identifiers I use in a custom inventory system. I have a 35-bit code, which is displayed as 7 5-bit elements, which need to be human readable and unique. The method to generate the codes does not necessarily have to be format preserving, that can just be a side effect of the algorithm used.

The method I use generates a 7 character code, with each character being alphanumeric 0-9 and A-Z, omitting OIZS because they are too similar visually to 0125. Internally the algorithm is a block cipher called Bromine with 5 7-bit elements in a generalized Feistel network, which is based on the round structure of the HIGHT block cipher. The input is a numerical sequence, and the output is a pseudorandom alphanumeric sequence:

Because the input sequence is numeric, there are only 10 million output combinations for the given 34.36 billion possibilities for a 35-bit value. This limits the number of ciphertexts available to reverse engineer the algorithm or determine the key used. The algorithm is simple but has enough rounds to be secure given the key size (in theory). The use environment has no requirement for this kind of security, but it allows it to be used for other applications if needed. The numeric input is a security and usability requirement, and not a limitation of the algorithm.

If used to generate coupon codes, certain input elements or bits can be fixed, and those fixed bits can define the coupon type or discount. The system would only need to keep track of used coupon codes, and decode them to determine the type and validity. Only 1/3436 codes entered randomly will decode to a valid input, and the number of coupons from valid inputs can also be limited further.

For example, your input could be structured as XXYYYYZ, where XX is the coupon type, YYYY is the value, and Z is a fixed element such as 0. Coupon 01 would be assigned to a 5% discount with only 100 allowed coupon uses before it expires. When entered into the system, it is decoded, its structural validity is determined (is numeric and Z=0), XX is determined to be a valid coupon, and YYYY is determined to have not been yet used for a given XX. If all requirements are met, the discount is given, and XXYYYY is saved for comparison with further coupons. Only 0.003% of this example format meets the required structure and only 1% of these decode to the desired coupon type.

If I understand this correctly, you want to "encrypt" a number, turn it into a different one, and reverse the process? I think this algorithm is ok for this purpose…

I implemented this algorithm in VB and I got some pretty random looking numbers https://s22.postimg.org/42m3uoy01/bitmap.jpg

And you can reverse the algorithm to "decrypt" the numbers.

I got no collision (2 numbers producing the same value) but some got pretty close. Now if you were to sort the values by length (or even randomize their order) you would have a nice number of coupons that can be reversed to their initial number. Note that the smallest encrypted number doesn't equal the smallest decrypted number etc for each number. 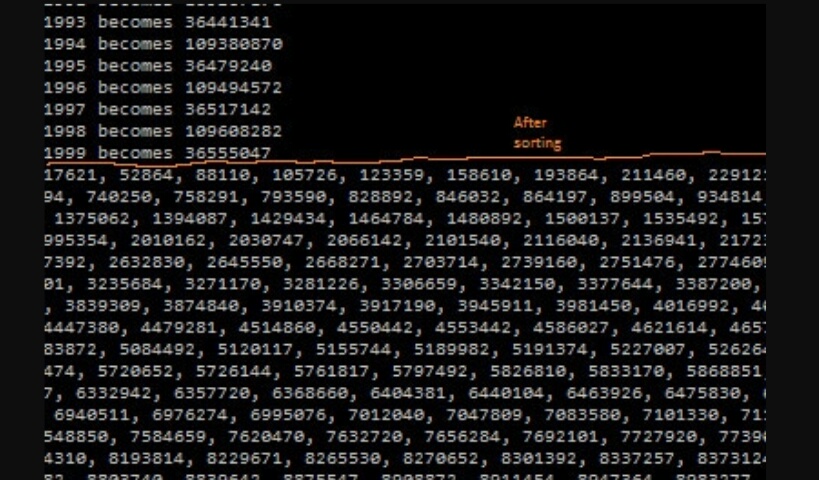 Not the answer you're looking for? Browse other questions tagged encryption algorithm-design format-preserving or ask your own question.