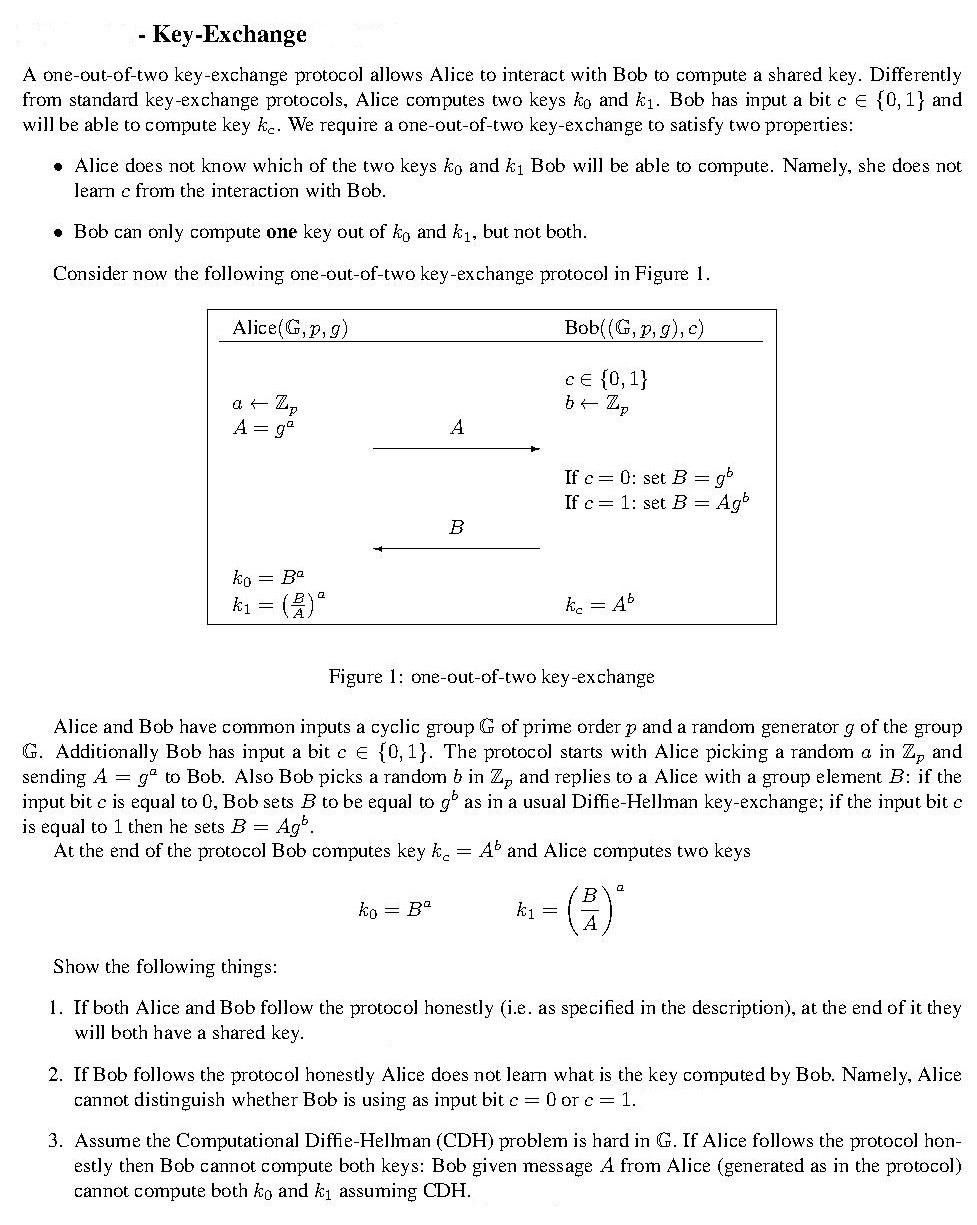 Now given this problem, for part 1) I have solved it as follows, (I hope I am correct). The basic idea is this:

Therefore step 5 is the same is as Step 4 due to modular exponentiation giving us the shared secret key (could also be between Alice and Bob).

Now for Part 2 and Part 3 I am not sure how to solve this - so any help would be kindly appreciated - please as I have an exam question that will be similar. Thanks guys!

For question 3, let us suppose that there is a player, Bob, that is able to compute both $k_0$ and $k_1$ with some fixed probability $\epsilon$ after performing a one-out-of-two key exchange with Alice. Suppose now that you are given a challenge for the computational Diffie-Hellman problem: you receive the description of a group $\mathbb{G}$, as well as a tuple $(g, X= g^x, Y = g^y)$. You break the CDH assumption if you manage to return $Z = g^{xy}$ with some non-negligible probability. Therefore, your goal is now to construct a $Z$ which will have a good probability (related to $\epsilon$) to be equal to $g^{xy}$, by interacting with Bob: you'll play a one-of-of-two key exchange with him, using carefully chosen elements from the CDH challenge instead of picking group elements according to the specification of the key exchange. Then, you'll reconstruct $g^{xy}$ with good probability using the keys $k_0,k_1$ that Bob returns (recall that they have a probability $\epsilon$ to be the correct keys).

I've given many details, so you should be able to figure out how to properly answer the question by now. If you are still blocked, if there is something you do not understand, please do not hesitate to mention it and I'll provide further insights.

Let me sum up: we have an adversary Bob, to which we can send some $A = g^a$ and who eventually returns two keys. At the end of the interaction with Bob, by computing $k_0/k_1$, we recover $g^{a^2}$ (with probability at least $\epsilon$, as this is the probability that both keys are correct).

If you still do not see how to solve the exercise, I'll give you the entire solution, but it's way more interesting and useful for you if you figure it out for yourself.

Not the answer you're looking for? Browse other questions tagged diffie-hellman key-exchange oblivious-transfer or ask your own question.

8
Security of a security protocol for key exchange, using symmetric-key cryptography
1
Attack on a key-exchange,symmetric-key cryptography protocol
2
Can a key exchange protocol exchange a one time pad instead of a key?
0
Anything known about this variation of Diffie-Hellman key exchange protocol?
1
How to exchange a secret through untrusted server in two steps?
0
Is it safe to use shared secret as a symmetric key in one way communication?
1
DH Key Exchange Protocol
0
Example of a Two-party GMW Protocol
1
How to compute certificates using Diffie-Hellman key exchange with certificates and Elgamal signature scheme