CBC variant: why encrypt the nonce with a different key?

I am a newbie at cryptography. I understand the CBC encryption, somewhat. You don't want to use the same "IV" for every message because then the ciphers are not very random. My question is regarding the nonce-based CBC. My main question is why does the nonce needs to be encrypted with a different key than the rest of the message?

And a side question is does the nonce needs to be different? Or can it be predictable and reusable? 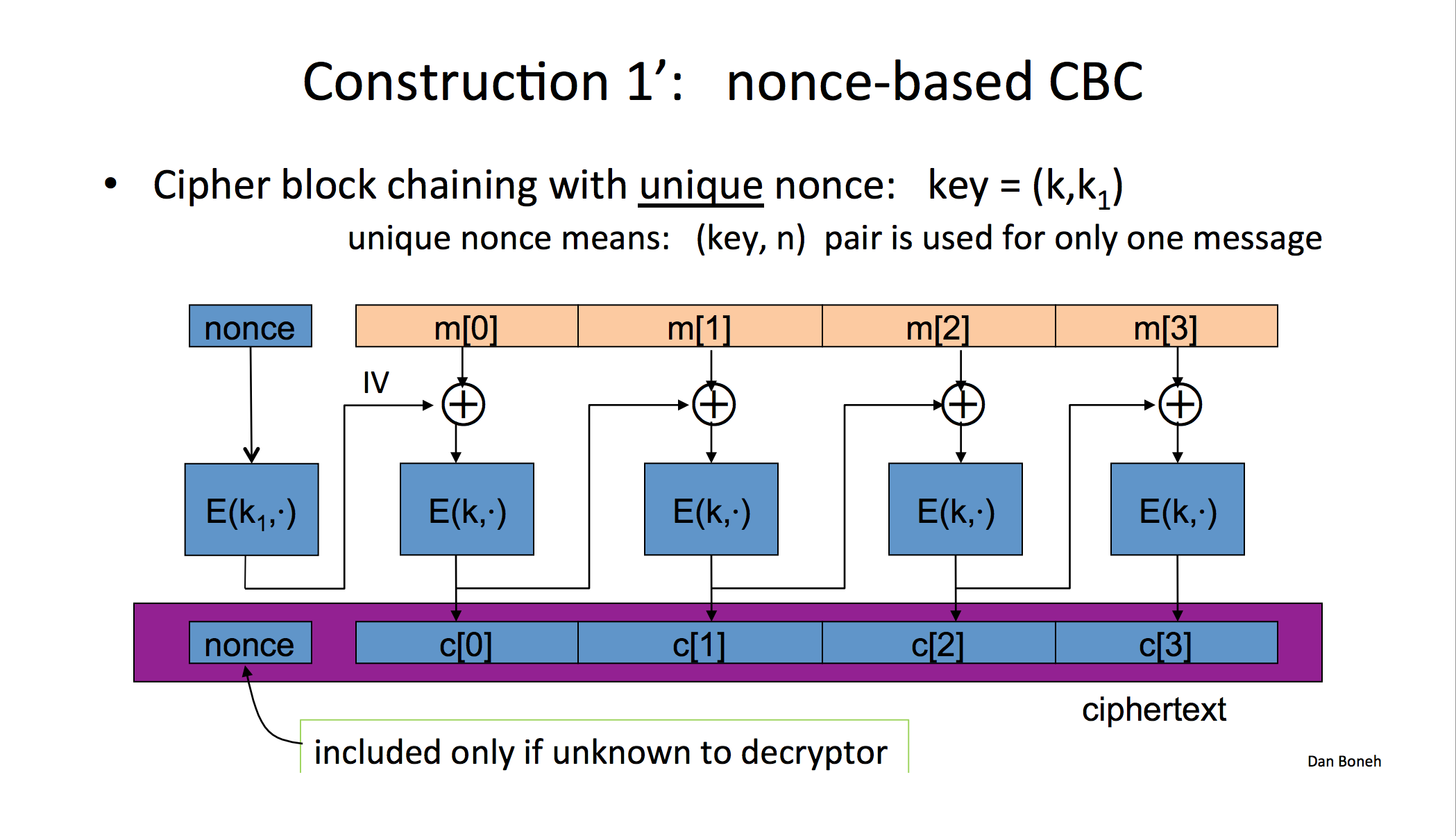 (From A Graduate Course in Applied Cryptography by Dan Boneh and Victor Shoup, problem 5.14)

I believe that it has to do with the model of nonce selection, in particular, that the attacker is allowed to choose the nonce (as long as it is unique).

If we assume that such an attacker is plausible, then if the nonce is encrypted with the same key as everythine else, then attacker can perform a chosen nonce/plaintext attack which serves as a distinguisher, as well as allows an attacker to decrypt low-entropy plaintext.

Here's how it works: suppose the attacker has a ciphertext where he has a guess $t$ to the value $m[i]$, and (of course, the ciphertext values $c[i-1]$ and $c[i]$). Then, the attacker constructs a message with the first block being $c[i] \oplus t \oplus c[i-1]$, and asks it to be encrypted with the nonce value $t \oplus c[i-1]$. He then examines the first block of the resulting ciphertext; if it happens to be the value $c[i]$, then (with high probability) his guess is correct.

If $t \ne m[i]$, it is quite unlikely that the result of the two encryptions will happen to be the value $c[i]$.

Having the process that initially encrypts the nonce use a distinct key foils this attack.

Now, if we assume that the attacker cannot arbitrarily choose the nonce (e.g. the nonces are sequential), then this attack does not apply; reusing the same key is safe.

The scheme you describe is also presented here, where it is called CBC1. The attack presented there also assumes the attacker can supply the nonce but is not allowed to reuse a nonce. The goal of the attacker is to determine whether the encryption oracle is encrypting the actual plaintext that is supplied or returning random bits as the ciphertext. It works like this:

Not the answer you're looking for? Browse other questions tagged keys cbc nonce or ask your own question.

34
Why is CBC with predictable IV considered insecure against chosen-plaintext attack?

5
How much data can I encrypt with AES before I need to change the key in CBC mode?
1
Determining nonce between unsynced systems
11
Why do stream ciphers use a nonce?
2
Why is a one-time MAC secure for MAC-then-encrypt with randomized-CTR but not randomized-CBC?
0
cbc - why not like this? what's wrong?
3
Security proof for CBC as a prefix-free PRF
5
Choice of padding scheme to prevent CBC padding oracle attacks?
1
How is a PRP different from PRF? Both can be inverted to get the same input
1
Exploitability of AES in CBC Mode For Recovery of Plain Text
5
Can an arbitrary physical image be a key?