I am currently experimenting with the Blowfish encryption.

I noticed that the decrypted message and the original message doesn't have the same length. This applies for the ECB, CBC and CTR mode. 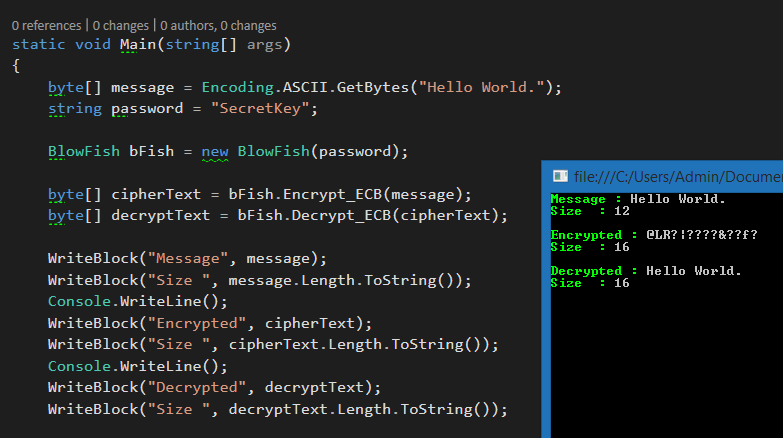 The difference of bytes from the original message to the decrypted message are just trailing zeros at the end of the array. However, the zero-padding-length at the end seems to vary.

Is there a way to produce a decrypted output with the same size as the input message?

A way to calculate the length of zero-padding at the end (so that I can cut them off in the end).

For plaintext ASCII text you can simply remove all zero bytes at the end; zero is a control character called NUL which should not appear in printable text.

Note that there are two forms of zero-padding: one that always pads and one that doesn't always pad (which is more often used). You could encrypt a 8 byte block of plaintext to see which one you got.

Note that for binary messages that may contain a zero byte at the end that zero-padding is not deterministic, meaning that you cannot determine the exact amount of padding. You would need to implement a padding mode such as PKCS#5/PKCS#7 padding yourself if you require that.

Do not use Blowfish, use a 16 byte block cipher, preferably AES in an authenticated mode such as GCM (which does add the authentication tag as overhead though). Even Bruce Schneier - the inventor - doesn't recommend Blowfish anymore.

An 8 byte block cipher is especially harmful for CTR mode. You'd better use CFB or OFB mode if you have to stick to Blowfish. Those are also modes that turn the block cipher into a stream cipher, so they do not require padding.

Not the answer you're looking for? Browse other questions tagged encryption padding blowfish or ask your own question.

3
Known-plaintext attack on Blowfish in ECB mode
2
Rainbow tables and blowfish
1
Blowfish ECB mode: Tools for known-plaintext attack?
8
Why does SHA-2 call for doing 10* padding in addition to appending the message length?
2
How is original plain text length reconstructed after decryption under RSA?
2
Why does FIPS 180-4 require the final padding block start with a 1?
3
Blowfish padding
2
SHA1 padding on length extension attack
1
OpenSSL: How to maintain padding from encryption after decryption?