One of the most (in)famous hardware derived random number generators was Lavarand (patent). It did it with funky lava lamps. An image of the lamps was hashed and fed into Blum Blum Shub (BBS) to produce a cryptographic bit stream.

How? The patent refers to using NIST SHS-1 (SHA-1) which outputs a 160 bit hash. This seems to get reduced to multiple 140 bit hashes and then "The 140-byte value gets fed through the Blum Blum Shub[sic]". I thought that the seed for BBS was computed via prime multiplication. How can the seed (typically p.q) just be arbitrary hash output and still perform it's integer factorisation? BBS typically utilises a single state of 1000s of bits, not groups of 140. They did it like this which is a little lite on detail, and steps 3 & 4 from the archived web site don't clear it up any... 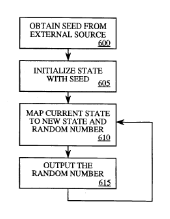 I realise that this was all a long time ago. How can above steps 600 and 605 be connected together?

I thought that the seed for BBS was computed via prime multiplication.

This is not how BBS works. To help better understand the seed, it's necessary to explain BBS.

This is a 1062-bit modulus. Unfortunately, it seems that BBS can be broken† up to $10^{54} n^3$ times faster than it takes to factor the $n$-bit modulus. This means that BBS used with their parameters can be broken $10^{54} \times 1062^3 \approx 1.20 \times 10^{63}$ times faster than it takes to factor the modulus, which is a significant enough speedup that the proof is completely useless. Additionally, the proof assumes only a single bit is extracted from each $x_i$ (officially by taking the parity of $x_i$). If more bits are extracted at a time, it becomes even weaker. Parameters that seem acceptable are terrible for BBS.

The security proof for BBS is only a reduction to a problem with no known solution. That is, a correct implementation (i.e. one where only one bit is extracted from each $x_i$, and only when the modulus is "sufficiently" large) can only be broken if the quadratic residuosity problem (QRP) is solved.‡ It is "proven secure" in the same way that RSA is "proven secure" because a proper implementation is provably reducible to the security of the RSA problem (the difficulty of finding the $e^\mathrm{th}$ root of an integer, modulo semiprime $N$), but no one thinks of RSA as having perfect security. In other words, BBS has a security reduction to a yet-unproven problem, and is not information-theoretic secure.

How can above steps 600 and 605 be connected together?

Are you asking how the 140-byte seed comes from the 160-bit hash? That is actually answered in the link you provided. There are seven SHA-1s. The seventh hashes every seventh byte, the sixth hashes every sixth byte, etc. The bytes come from an image of the lava lamp itself. The final hash values are concatenated to form a 140-byte (1120-bit) value. This value is used, directly, as $x_0$.

* The only thing you are losing by not having access to $p$ and $q$ is the ability to calculate any $x_i$ value directly from $x_0$ without having to calculate $x_1 \cdots x_{i-1}$ first. Euler's theorem can be used to do $x_i = (x_0^{2^i \bmod \lambda(N)}) \bmod N$ where $\lambda$ is the Carmichael totient function. If an attacker factors $N$, they can do this as well, breaking the security reduction.

† Broken in this context does not refer to the ability to predict the random stream or recover the seed. Instead, it means the security proof is invalidated and that the algorithm is no longer reducible to a known hard problem and that a break could exist which does not rely on solving QRP. Critically, it does not automatically imply that such a break does, in fact, exist.

Not the answer you're looking for? Browse other questions tagged random-number-generator sha-1 blum-blum-shub or ask your own question.

29
Blum Blum Shub vs. AES-CTR or other CSPRNGs