What are the dangers of using CPU clock drift for generating random data?

From what I understand, a physical source of true randomness could be achieved with a multi-core processor, by using clock drift between two or more cores.

However, a processor is easier to manipulate than nuclear decay or thermal noise when it comes to true random number generation.

My last question is really subjective to different libraries but if you can provide examples and scenarios or comparisons of potential attack vectors it would really help me understand.

I am currently under the impression that using a CPU for a TRNG is about as good as a software based CS-PRNG, but I could be wrong.

The CSPRNG turns a small amount of data (typically a few thousands of bits) into an effectively endless stream of bits, and ensures that all the bits are independent. More precisely, a CSRNG must have the property that if an adversary sees all the output bits except one (but does not get to see the RNG's internal state), they have no clue what that hidden bit is: it could be either 0 or 1 and the adversary can only guess with a chance of success that's extremely close to $1/2$ — no more than $1/2+2^{-N}$ for a CSRNG with $N$-bit quality (e.g. $N=128$). A CSPRNG guarantees that property provided that its seed is sufficiently “varied”, in that the adversary can't guess the seed with a chance of success that's better than about $2^{-N}$.

A discretization of a physical phenomenon always has biases: some sequences of bits are more probable than others, due to characteristics of the physical phenomenon or to measurement errors. Using this as input to a CSPRNG destroys all the correlations between successive bits. The CSPRNG also has other benefits, including the ability of combining multiple phenomenons, with the safety that combining sources together never weakens the result (even if one of the sources turns out to be partially or totally known to the adversary, the quality of the resulting RNG is still at least as good as the other sources).

Now the real question is, is clock drift (jitter) useful as an entropy source? The answer is yes, it is used in practice. Fast Digital TRNG Based on Metastable Ring Oscillator by Vasyltsov et al. (2008) gives an overview of work in that domain in §2.

If you're an application writer, that's not something you need to care about. Entropy gathering is done by the operating system.

If you're a system integrator, you have to take care that your system has proper entropy sources. All modern PC processors (RDRAND) and smartphones (running iOS, Android or Windows) have hardware RNG (using phyiscal phenomenons that differ from chip to chip). Embedded devices are a very varied breed, some have good entropy sources, others don't; clock drift is often irrelevant in this realm because there aren't enough distinct clocks (unless one has been provided for the very purpose of generating entropy through drift, in which case the manufacturer will generally provide a some firmware or driver code to perform the required measurements).

Measuring clock drift is not trivial. You need to make sure that you're reading data from clocks that aren't synchronized. You need to give the system enough time to get initialized and then for the clocks to get out of synch. You need to beware of environmental parameters; for example some clocks may be effectively unpredictable at sufficiently high temperature but completely predictable at lower temperature. A good hardware RNG will provide a quality estimate. Statistical tests on an entropy source can sometimes help figure out whether it's operating correctly, but often the types of biases depend on the physical construction of the source and tests need to take this physical construction into account in order to be effective.

The biggest danger is an inherent feature of using clock drift inside a busy computer. It's very difficult to accurately estimate the rate of entropy generation. You can't rely on what you're going to get, therefore satisfying the golden rule of (entropy in) > (entropy out) becomes problematic.

You can actually just use one core to generate a good quantity of entropy as all cores interact. Simply fetch the system time, as in System.nanos in Java. Do this:-

This sequence of numbers is a bit unpredictable but varies according to what your machine is doing and the type of machine. And probably the weather. 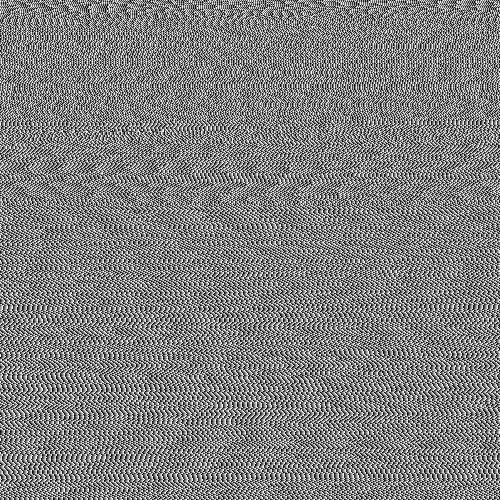 You can clearly see structure. You can also see that the structure continuously changes across the image. You could see it even clearer if you could zoom in on the file. That change is the entropy component. For this exact image, entropy is about 14% equivalent to 280,000 bits, or 1.1 bits /byte. (Entropy measured via compression.) So 14% of the image continuously changes, whilst the remaining 86% is fixed, which kinda makes sense looking at it. That entropy collection rate is specific to my machine at the time I collected it whilst streaming trance music.

All this data is theoretically predictable, but in reality isn't as the inside of a Java machine is incredibly chaotic. An equivalence is chucking a die. Whist we understand all the inherent processes as the die tumbles, we can't predict the score. The computer's chaotic environment can be sampled to generate pure entropy simple by reading the time. It's just that the entropy rate is too difficult to predict due to the same chaotic circumstances. That's the danger. I got 14% this time. You'll very probably get something entirely different, especially if you listen to different music or a CD.

PS. Actually, a thermal noise TRNG is easy to manipulate. All you have to do is put your hand on it and warm it up. The bias and entropy rate will change then.

PPS. Java's SecureRandom effectively uses the technique I've explained above to seed itself. It times the rate of different threads which are perturbed by exactly the things that affect System.nanos.

"However, a processor is easier to manipulate than nuclear decay or thermal noise when it comes to true random number generation."

This assumption is wrong (if you mean it would be easier to use a CPU than another source), since TRNGs use other sources much more often than clock drift. If you are trying to make an auditable random number you need the whole thing in a black box that doesn't do anything besides accept in entropy and output random numbers. You can't use some CPUs you already have because they may influence the random number.

Are there any attacks?
Maybe
Are any of them practical?
Maybe
Prevention?
Put the two CPUs in an isolated box running some known dummy program with known inputs, then realize it would be cheaper to replace them with some other source of entropy.

Not the answer you're looking for? Browse other questions tagged randomness entropy pseudo-random-generator attack cryptographic-hardware or ask your own question.

6
Using chi square for distinguishing between compressed and random data
16
What to watch for with openssl generating weak keys? (low entropy)
2
/dev/random only needed for key generation / CPU pattern encryption
10
Are poly1305 authenticators distinguishable from random data?
7
Generating a random number using a quantum computer
5
What are usable entropy sources in a headless machine without /dev/random or any cryptography API?
32
Why do some people believe that humans are "bad at" generating random numbers/characters like this?
4
What is the NIST recommended maximum bias for random number generators?