Why are the right halves kept unchanged in Feistel networks?

As I'm going through the Feistel network in the DES algorithm.

While encryption uses a Feistel Network, the input block is divided into two halves left ($L$) and right half ($R$). In each round, the right half $R$ goes through unchanged. But the left part $L$ goes through an operation $F$.

I didn't understand why right halves is kept unchanged in a Feistel Network. Can anyone explain?

If you examine the diagram for a Feistel Network, you will see the crossing of the wires which indicates the swapping of the blocks: 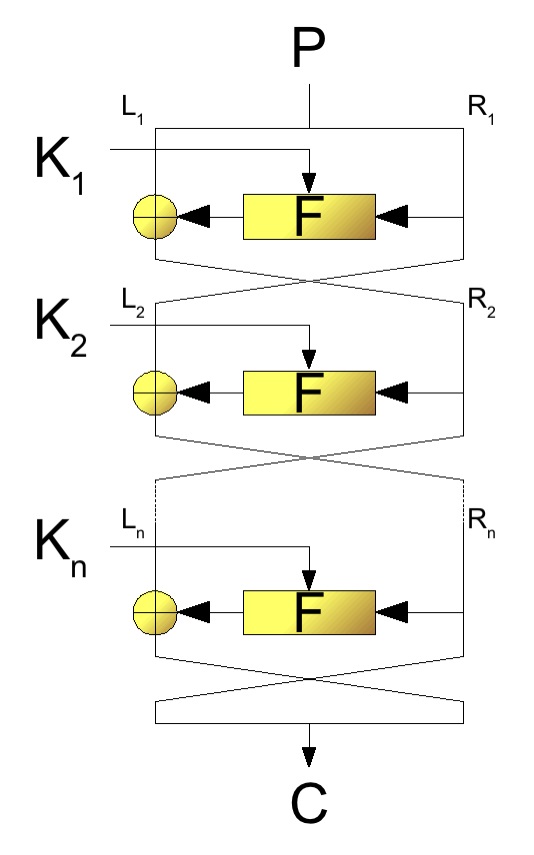 Thus, despite the fact that the addition of the output of the PRF is only ever targeted at one side of the block, both halves are operated on over the course of multiple rounds.

This structure allow us to make the process invertible. A Feistel structure creates a pseudo random permutation from a pseudo random function. We want someone with the key to be able to calculate it in reverse and get the plain text from the cipher text.

Also recall that the after two rounds both sides get scrambled and after many rounds they are thoroughly scrambled to make deciphering without the secret key rather difficult. DES is no longer considered secure but the Feistel structure is still used in other block ciphers.

The structure of the Feistel network allows one to use a Pseudorandom function which does not have to be invertible. Thus one is more flexible in designing $F$.

5
Feistel-Network - why wire crossing?
4
In a Feistel cipher structure, what exactly does the "round function $F$" do?

2
How are subkeys, in Feistel block ciphers, derived for each round?
6
How is a per round key generated in DES algorithm?
3
Feistel cipher key generation and round function algorithms
2
Known-plaintext attack on 1-round Feistel networks
3
Two Round Feistel network
0
AES and the Feistel Structure Used Together?