Why is EAX not a generic composition?

In the document http://web.cs.ucdavis.edu/~rogaway/papers/eax.pdf (p. 7) Rogaway et. al. state that EAX is not a generic composition of an encryption and an authentication method.

The EAX algorithm is given in the following Image: 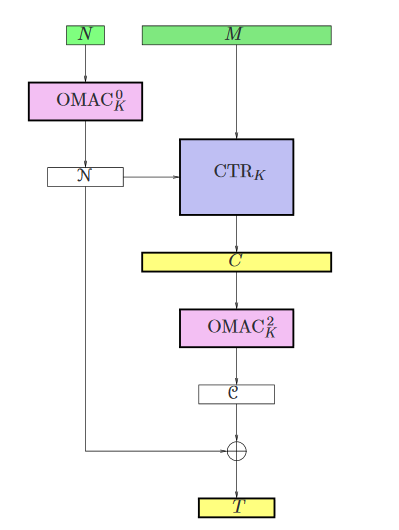 (the image is taken from p. 7 of the referenced paper and simplified by omitting the associated data)

So, the plaintext M is encrypted by a CTR block cipher mode and the resulting ciphertext is authenticated by an OMAC tag. So far, this looks pretty much like an encrypt-then-authenticate based generic composition. The only thing particular here is, that the tag $\mathcal{C}$ isn't the final tag but is XORed by the tagged nonce $\mathcal{N}$.

Added: Actually, I think the answer depends on the point of view.

(2) Design principle: When one tries to classify AE algorithms, one can look how they are designed. By design, a generic composition is an algorithm that runs an encryption and an authentication algorithm in a (generic) order that is independent from the primitives: E.g. Encrypt-then-Authenticate, Authenticate-then-Encrypt, etc. In this point of view I would consider EAX (as well as CCM) as a generic composition.

When reading the paper, it seems that there are three or so properties that make a generic authenticated encryption method:

EAX uses two well defined algorithms: AES and CMAC. So it seems the definition fails on (1). As EAX uses only 1 key it will always fail on (2) as well.

But yes, if you do not consider the special way $\mathcal{N}$ is constructed then EAX outputting just $\mathcal{C}$ could be considered a relatively generic construction when it comes to (3).

Adding it up, I personally think this should be a big NO, EAX is not a generic construction as defined in the paper; and just outputting $\mathcal{C}$ only makes a tiny difference.

Not the answer you're looking for? Browse other questions tagged authenticated-encryption eax or ask your own question.