If a SHA256 hash with high entropy is then hashed with one made from low entropy, is the resulting hash higher/same/lower entropy?

If one were to create a SHA256 hash using 256 coin flips converted to hex (which, as I understand it, is as "entro-phized" as one can capture in SHA256) then take that hash as a string, combine that with a hash of the word "cat" and hash the resulting 512 character string, would the resulting hash from that exercise be any less random than our "perfect" hash we began with?

My thinking is the final string would capture the same amount as the original randomness as what we started with because the "extra" entropy can not be captured and is lost. Is this the case and am I thinking about this correctly? Would hashing something with high entropy with something simpler ever cause a lower amount of randomness or does it only go up?

Thanks to anyone who can help explain this a little better.

(Side note: If you're not familiar with the technical terms random variable and expectation, or the definition of entropy in terms of them, I recommend you read up on some elementary probability theory first—the rest of this post will not make sense without these keywords! In the sequel, ‘entropy’ can be taken to mean Shannon entropy or min-entropy—both work, and coincide on uniform distributions, but cryptography works primarily in min-entropy. See this answer for a brief discussion of what entropy means from a crypto perspective.)

Rather, there's a good chance that for any fixed function $F$, there are many cycles on which $F$ is a permutation, and restricted to which $F$ thus preserves entropy. There's usually one main big cycle, which lends itself to a drawing of a giant hairy rho: $\rho$. In the limit as $\ell \to \infty$, $F^\ell(X)$ maps $X$ to an independent uniform random point on one of the cycles, the choice of cycle being weighted by the number of points on and leading to that cycle.

But in practical terms for cryptography engineering? Usually we treat $\operatorname{SHA-256}(X)$ as a uniform random variable independent of everything else in the system (except where length extension attacks might be relevant) with entropy equal to that of $X$, or 256, whichever is smaller.

If you have two N bit values, one with $K < N$ bits of entropy and the other with $T<N$ bits of entropy then the result will be approximately $\text{max}(N,T+K)$ bit of entropy. Additionally, rehashing loses entropy at roughly a rate of 0.7 due to collisions (just think of the balls and bins probabilities) so the entropy is slightly less.

So this is what you're proposing:- 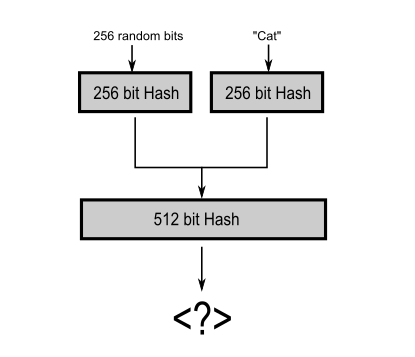 Cutting through your question to the crux:-

Would hashing something with high entropy with something simpler ever cause a lower amount of randomness or does it only go up?

There are two scenarios that have simple answers.

There is also a more complex scenario that I won't go into (unless pressed) concerning the actual entropy content of a randomness extractor /hash function. No one really knows the answer to this one though, and output < 262 bits.

So in conclusion, yes it can go up but certainly doesn't go down.

Not the answer you're looking for? Browse other questions tagged hash sha-256 entropy or ask your own question.

5
Can we estimate the loss of entropy when applying a N-bit hash function to and N-bit random input?
5
What is the relationship between entropy conditioning and final output bias in a TRNG?
2
How to calculate the bias of cryptographic hash output from biased input?
4
Strength of key derived from a hash function considering the birthday attack
3
What is special about an entropy count (RNDGETENTCNT) of 160 for libsodium initialization?
-2
Relationship between a key stream having a high entropy and whether it is cryptically secure in a stream cipher

3
Question regarding multiple SHA-256 rounds on a Bitcoin Brain Wallet passphrase…
6
Is this a good entropy collector and whitening technique?
3
Generate a unique 64 bit numeric database key without collisions at $2^{32}$ birthday threshold?
2
Is there a standard for hashing a list of strings?
0
A simple keyed message authentication code using XOR
3
If you SHA something that already has work put into it, is it still safe?
5
Can a deck of cards be used as a practical source of cryptographic randomness?
5
Entropy preservation through cryptographic hash function